Saturday 29 Jun.
Went out to have a look at several places that I have not fished in a while and some that I have. Raining quite heavy I was hoping it would stop, it didn't, well not until I had returned home and put my gear away.

Sunday.
Back to Ladyshore to try the spiders again, of course they did not work this time. Tried drys and nymph had a knock now and again and lost one fish but nothing to the net. Fish where rising but they would not come for a look at anything I or another chap who was fishing drys put near them. 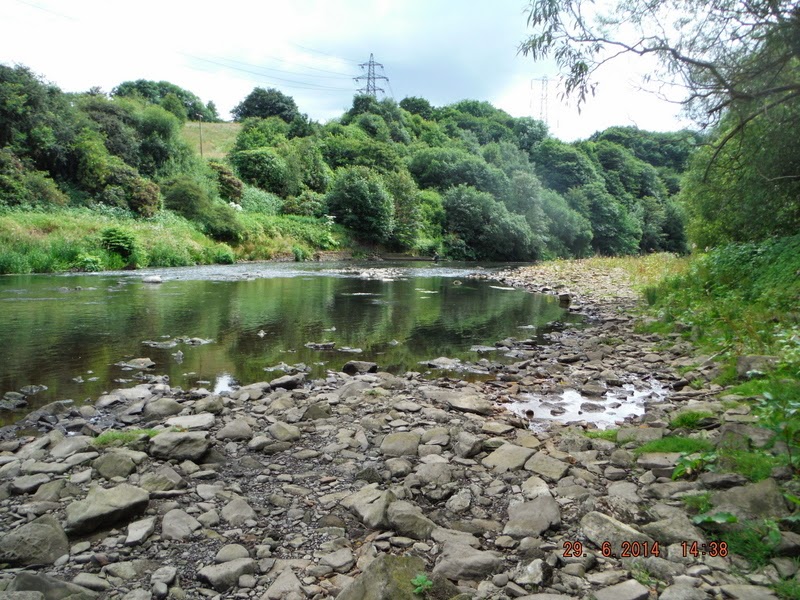 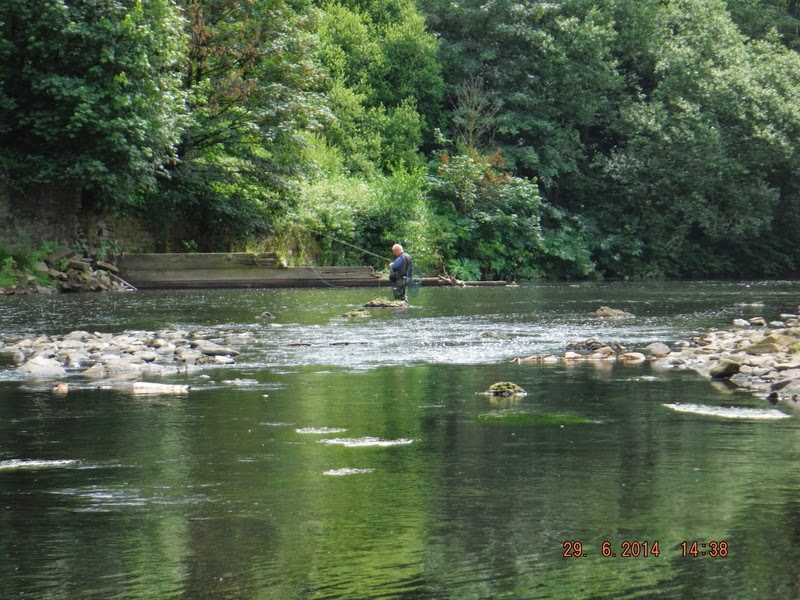 The only thing that made the day bearable was having several long chats with my new friend as we tried to work out what the fish might take, we gave up without an answer.

Tuesday.
Went to Ewood Bridge for my monthly kick sample, the river is very low with lots of brown alga, the numbers of invertebrates was disappointing I had expected  a large increase in the numbers now that the water temperature has increased. 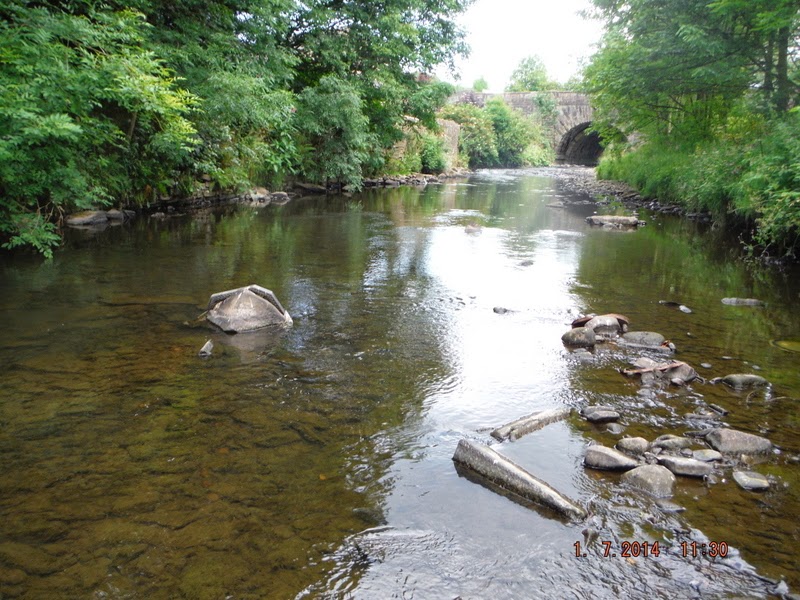 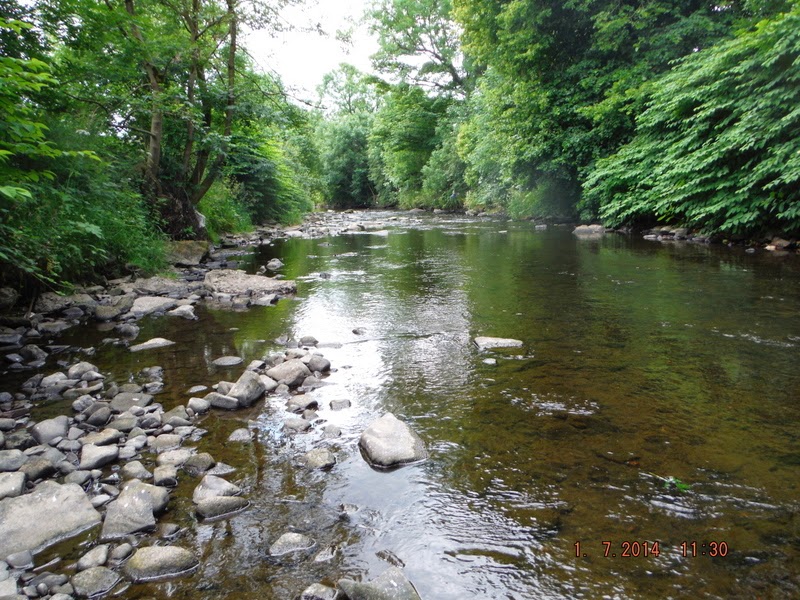 Tackled up with a Copper John nymph not expecting much and caught this one  before moving up river. 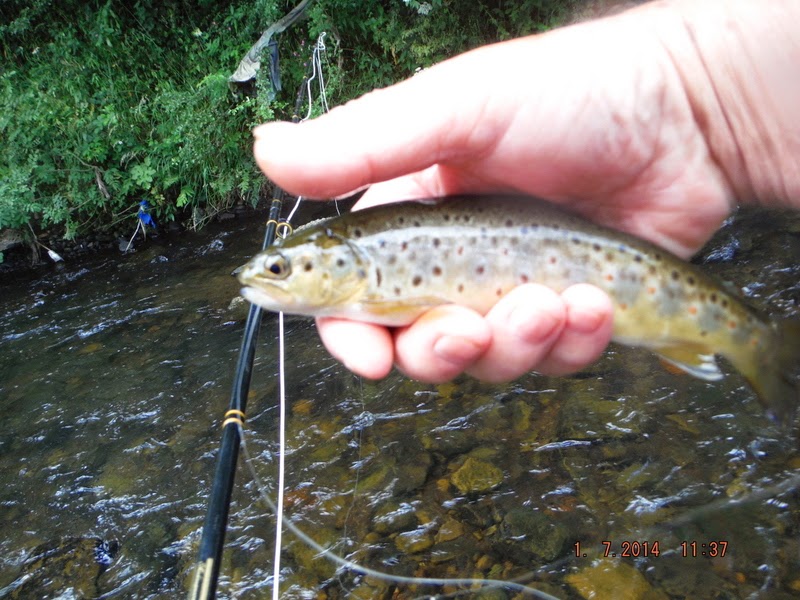 Fish rising so changed to Greenwell's and caught another small Brown. 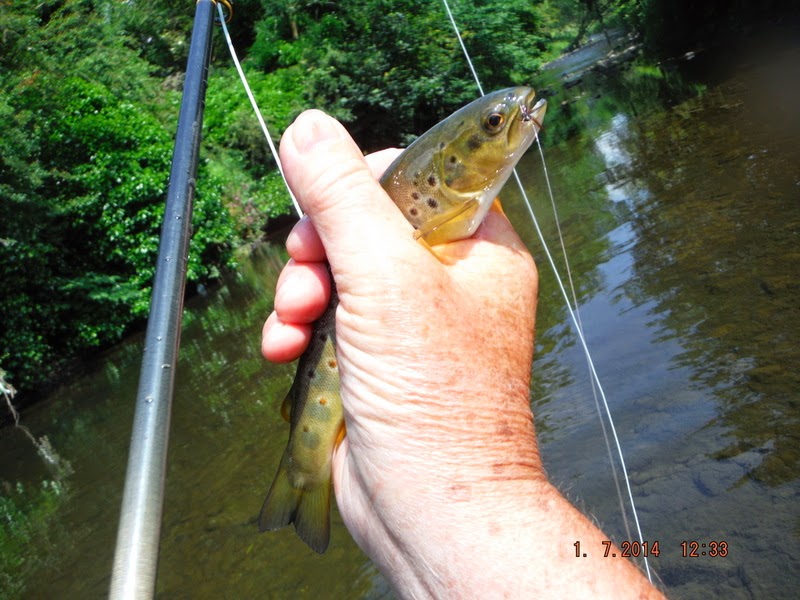 He must have liked me as he did not want to leave. 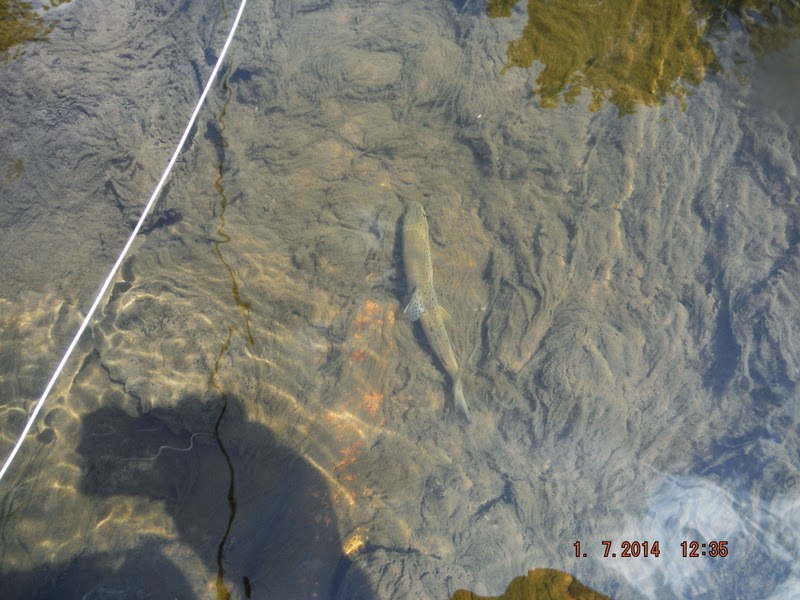 You can see the Alga that I mentioned earlier, nasty looking stuff, don't think it is good for anything. 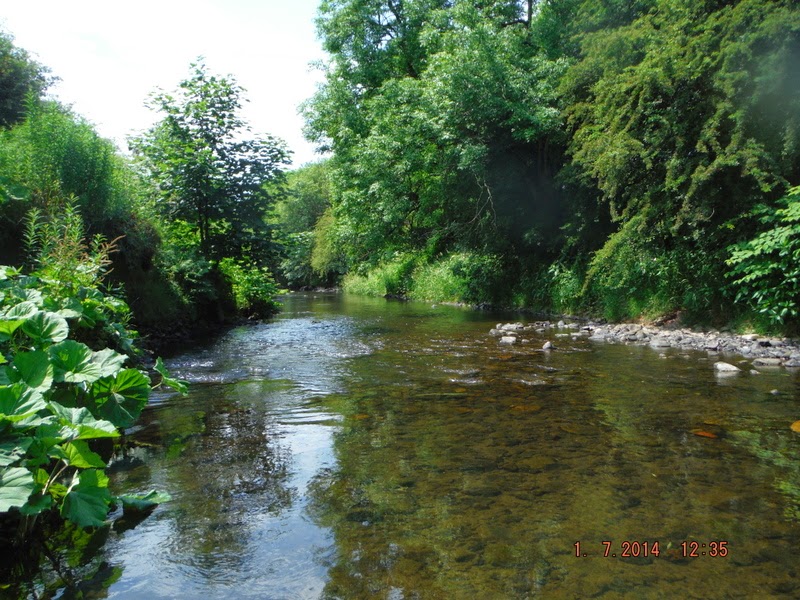 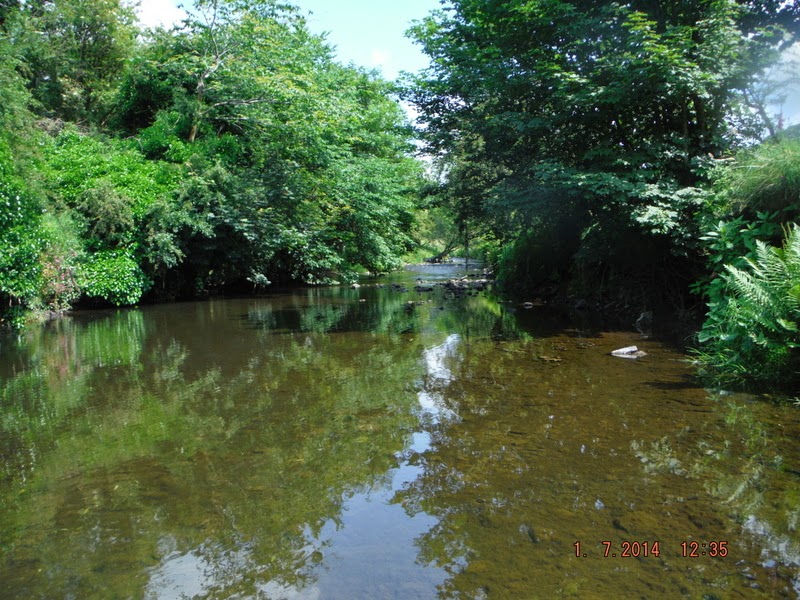 The river looks like a river should, in parts, then you see the rubbish in the picture below. 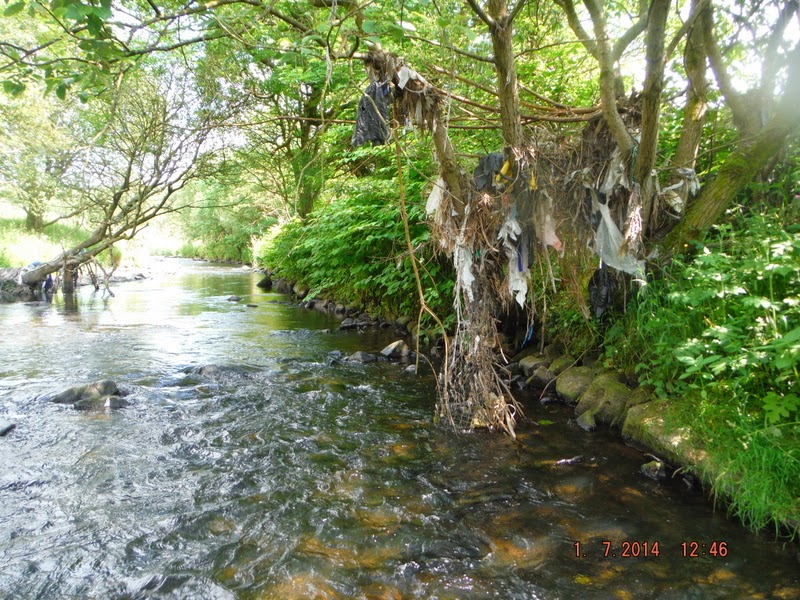 Goes to prove that the Irwell is a spate river, to get rubbish that high in the tree the water would be three feet above my head, hard to imagine it when the river is as low as it is at the moment. 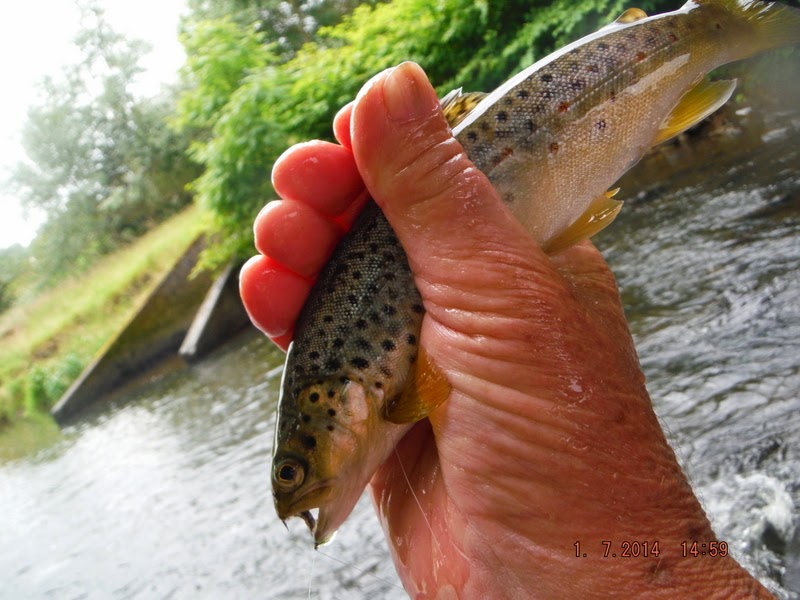 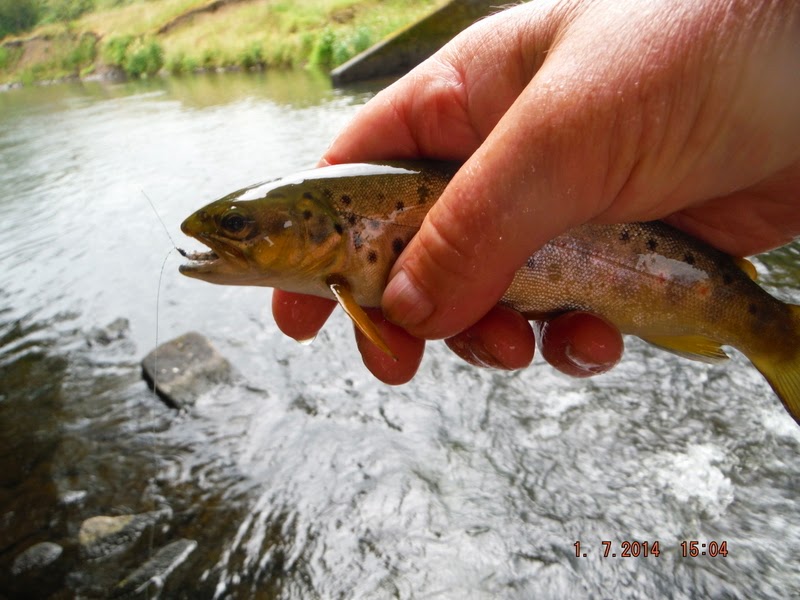 Had these two and one other all on nymph, not much to show for four hours of fishing, and to top it all off it started raining.
It had not been forecast so I had no coat with me and ended up rather wet. Back at the car the BBC told me that the weather was very sunny in my area, I give up with the MET Office.

I don't expect to fish tomorrow but might get a look at the river Douglas near Wigan with a bit of luck, must be one or two places to fish there.

Posted by Flyfishing the Irwell and other streams at Tuesday, July 01, 2014