The week before last I was looking for places to fish the Douglas way down stream of where I usually fish. Today I went looking much further up, through Horwich near the Rivington Reservoir.

The river runs under the main road just outside of Horwich and was narrow and over grown, I drove down a road that runs alongside the river and found a bridge and locked gate, but access for walking along the bank. 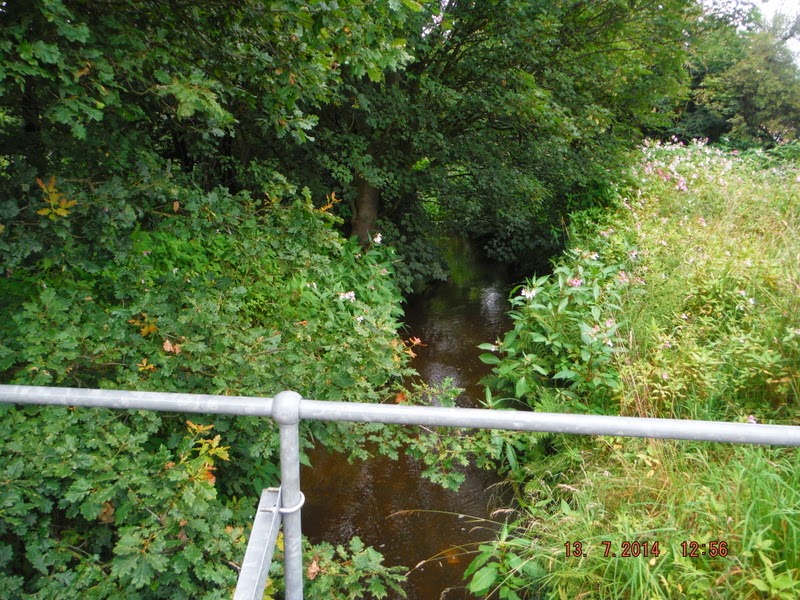 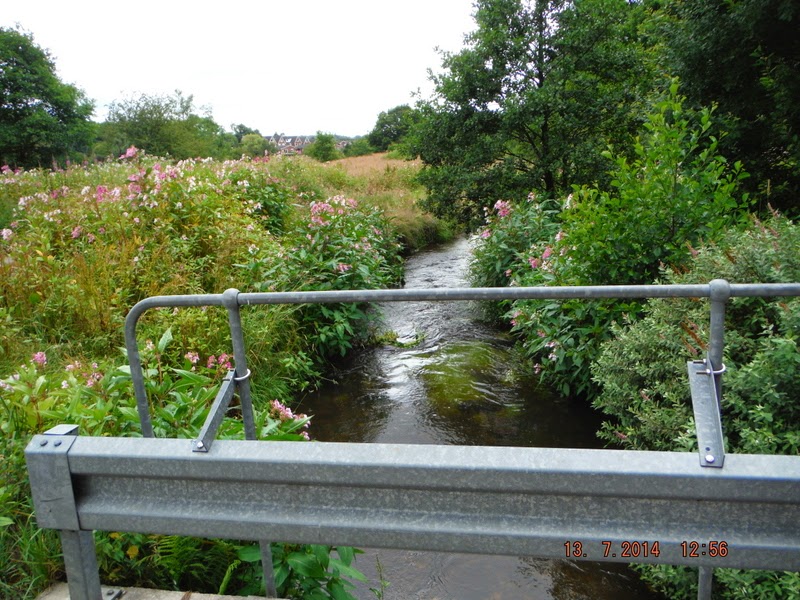 Although it did not look very inviting I tackled up a six foot six inch rod and put on all my gear for wading. Mainly for pushing through the high undergrowth which was still wet from the nights rain, saves me from getting stung as well. Glad I did too, it got pretty nasty further down. 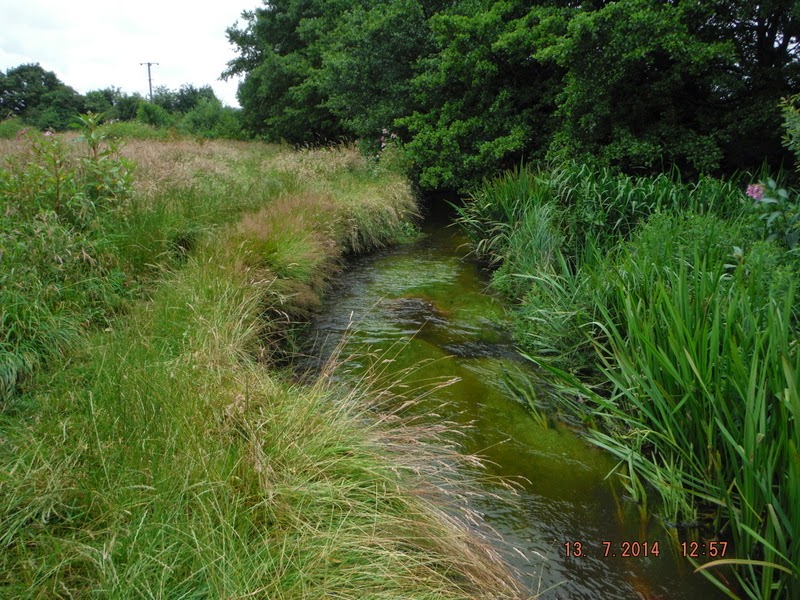 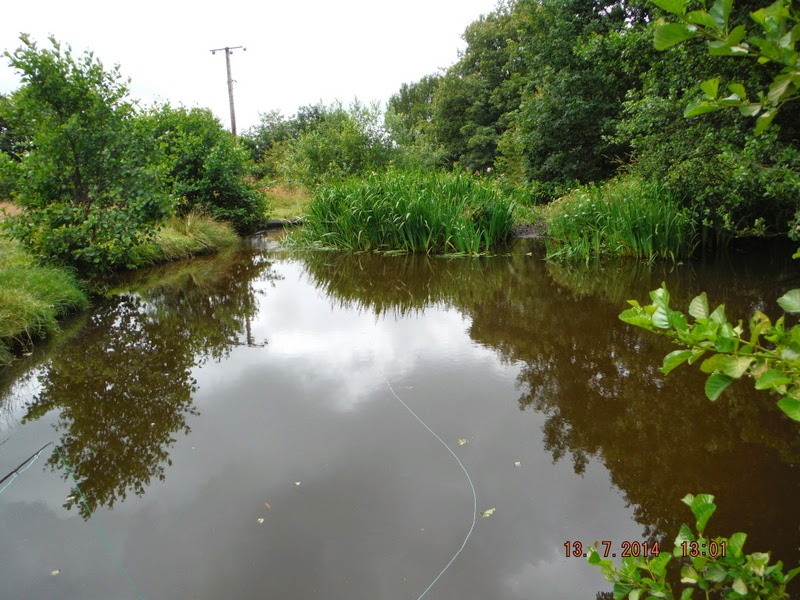 OK it doesn't look too bad in the photos and I did get a line wet but there was no sign of fish.

At the end of this pool was the weir below. 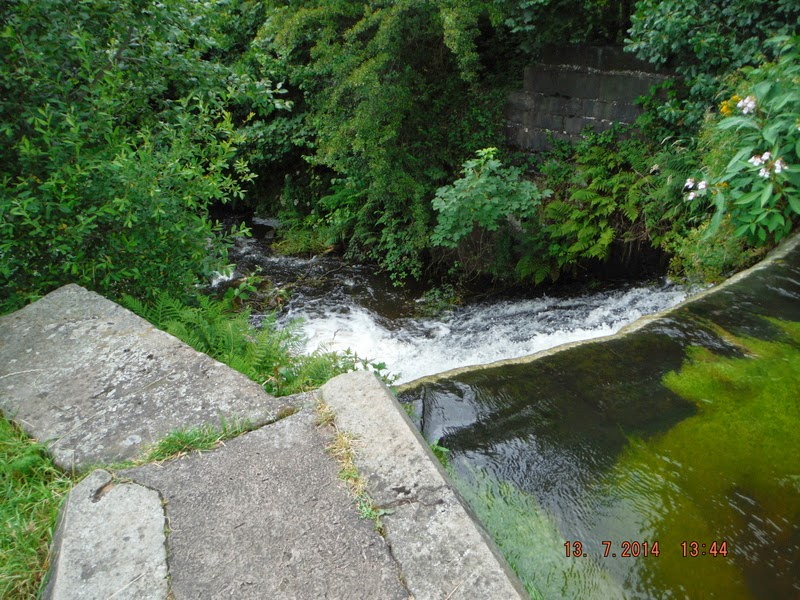 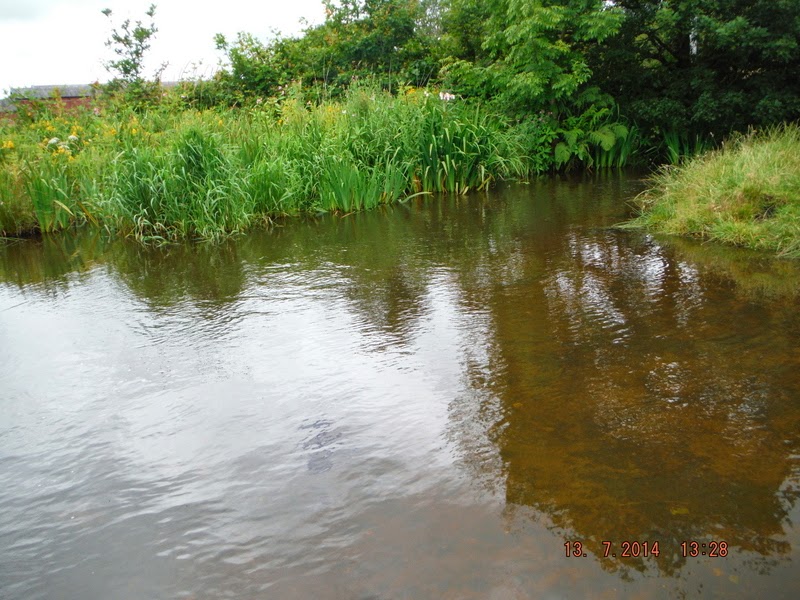 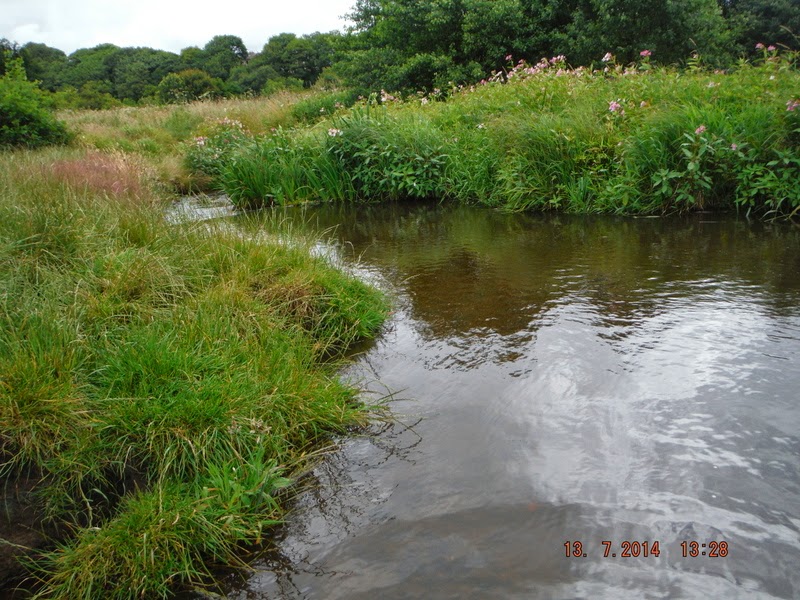 I did see one fish rise in this pool but not to my fly. 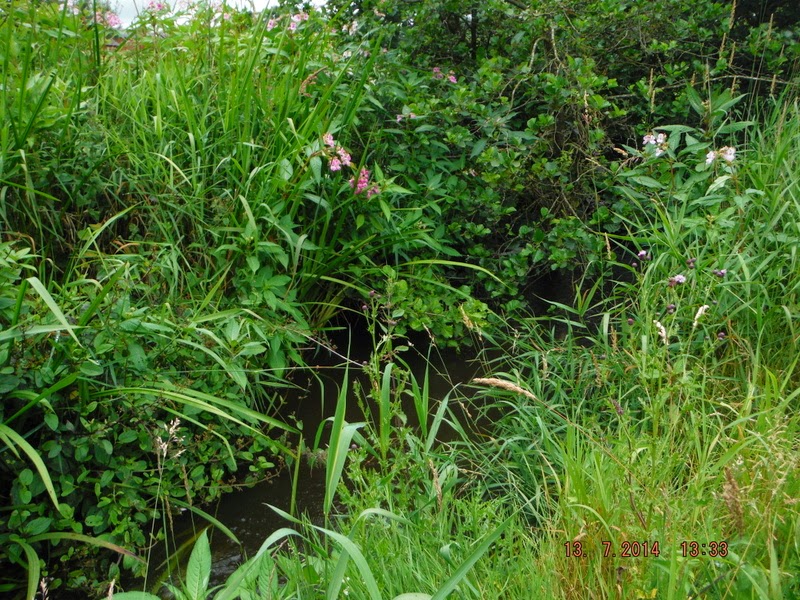 The river runs under that tree, honest. 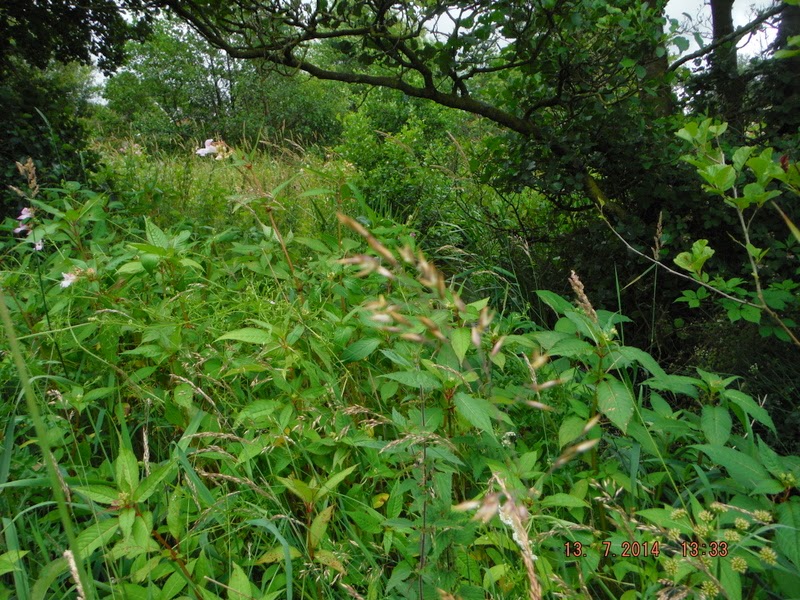 No chance of fishing here, I carried on down for a couple of hundred yards and it got worse so I turned round and back to the car.

Still early and although I was hot and sweaty I wanted to fish, off I went to my usual spot on the Douglas.

Same tackle same gear started with a Iron Blue Dun dry fly, fish on the rise but not to my dun. Changed to a Greenwell's and straight into a fish and a good one. Photo? I tried to hold it up and take one but I dropped it in the river before I could click.

The next one I made sure of a photo and took it to the bank. 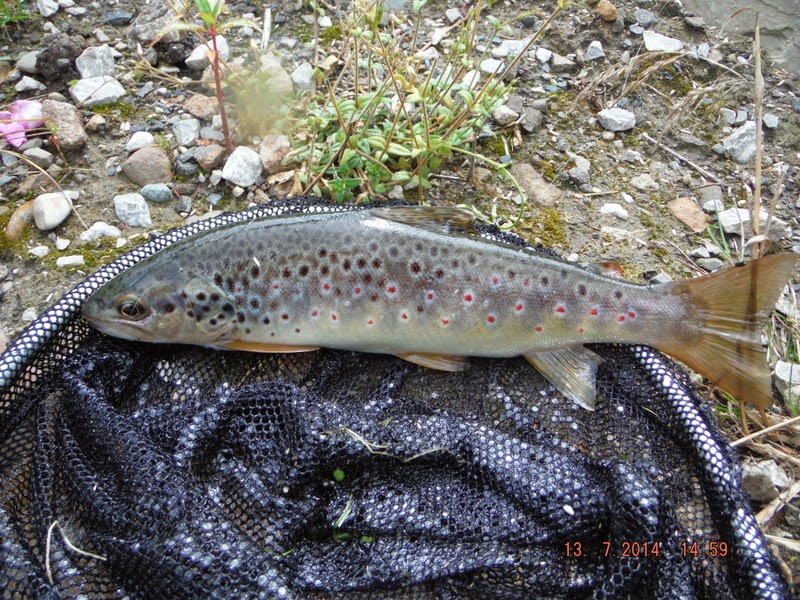 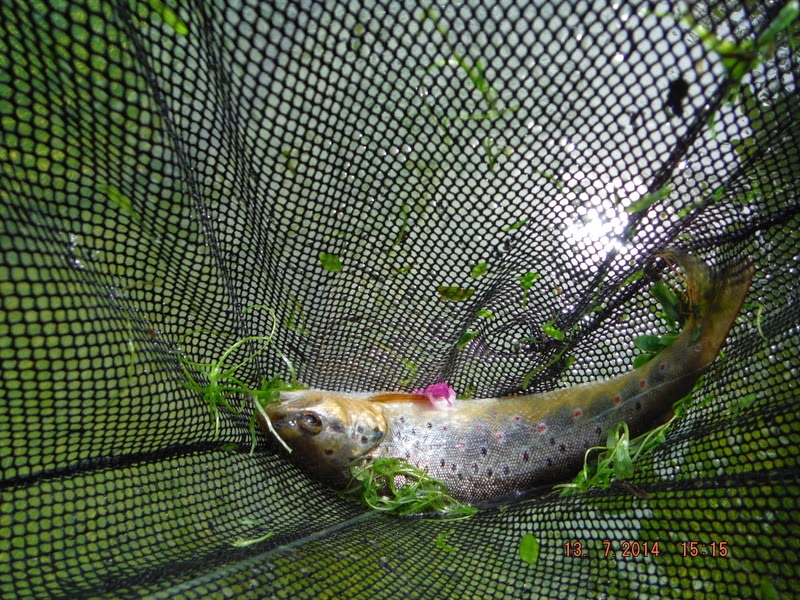 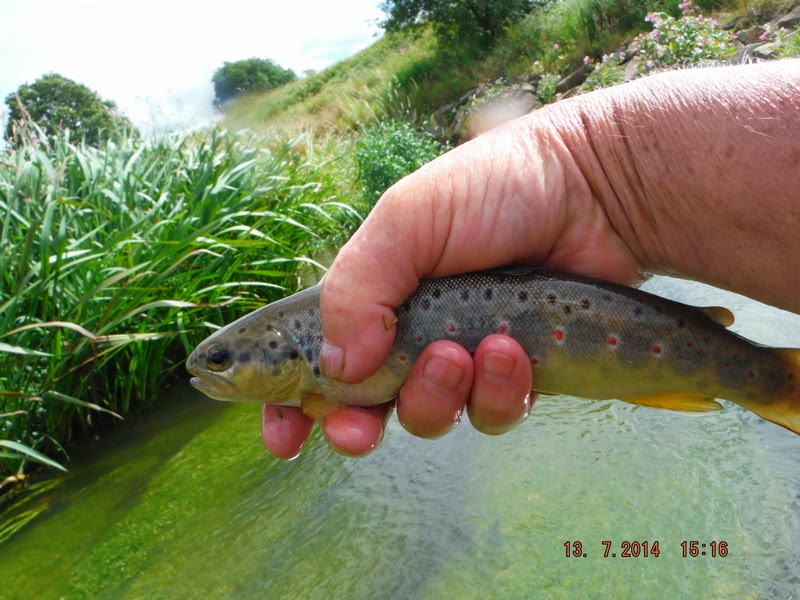 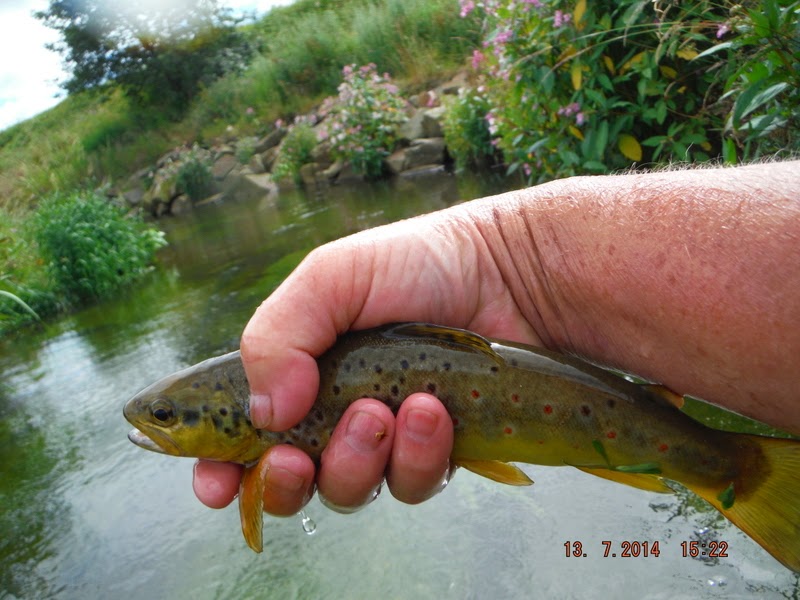 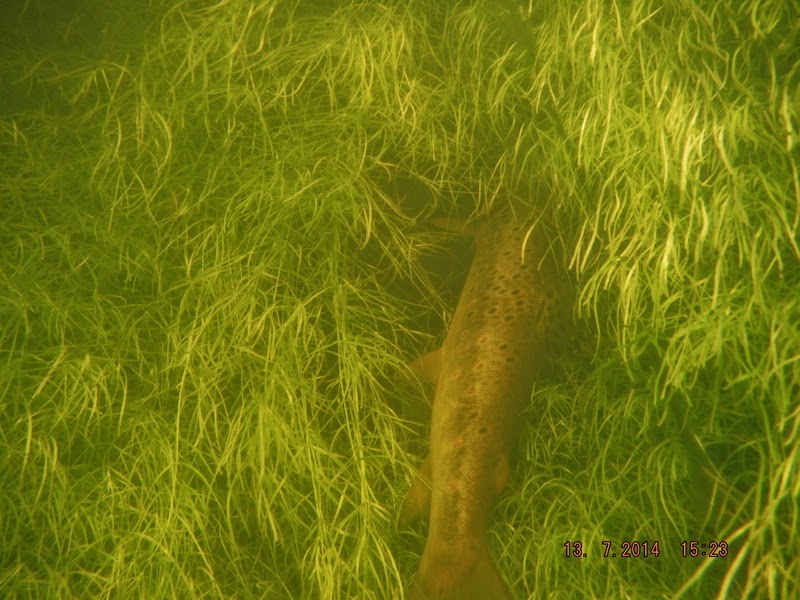 The weed in the river is getting to be a problem it is coating ninety percent of the river bed in places there will soon be no open water for the fish. Also you can lose fish if they get into it and I did more than once. 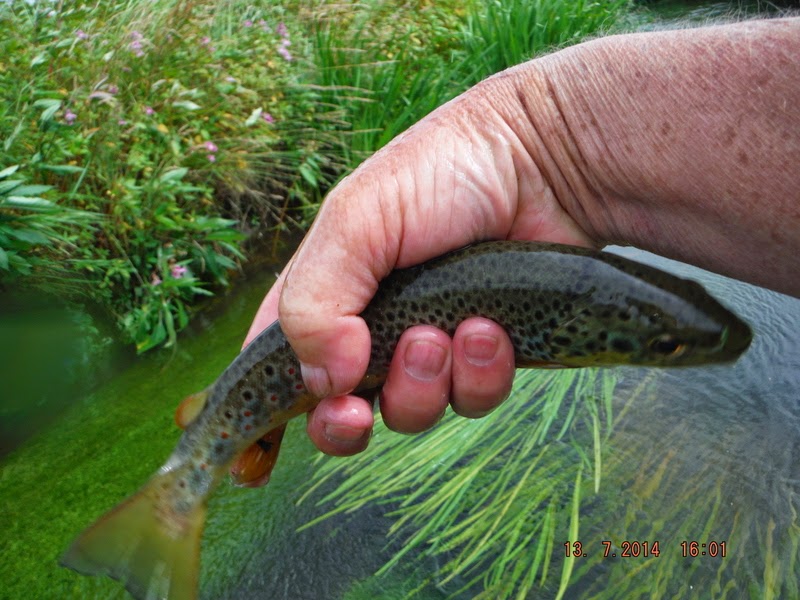 This one I had to dig out of the weed to land it.

I was getting tired, all the fishing has to be done in the river and wading up stream through the heavy weed was taking it's toll Although the water, most of the time, was up to the top of my legs and more in places. The weed and mud was often above my knees, causing a high stepping walk. I just hope that I do not get the cramps in bed tonight.
Posted by Flyfishing the Irwell and other streams at Sunday, July 13, 2014