Cooler today plenty of cloud and some drizzly rain. Decided to visit Eagley Mills having not been there for quite some time. The brook was as low as I had expected after no rain to speak of for a while.

Fished a Copper John Nymph and after a couple of snatches I hooked a good fish which turned out to be a chub. 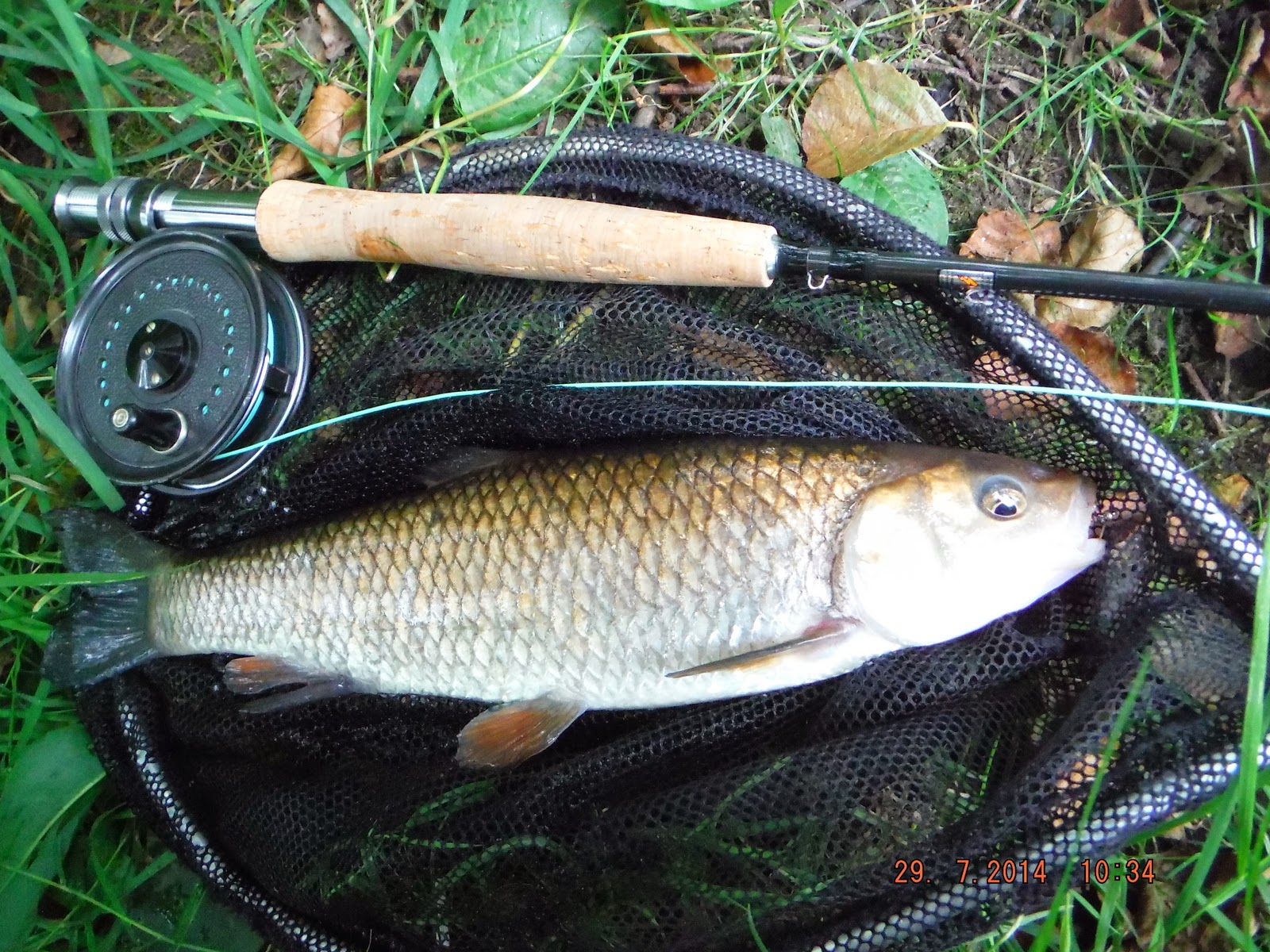 Not what I was expecting but very welcome after catching no fish on my last couple of outings.

Two young lads turned up to fish the other bank, one had a 5 foot spin rod with a cheap reel with very little line on it and the other had fished with a pole, which  was longer than the width of the brook. They where fishing with bread which usually works as people come to feed the ducks with bread.

After a couple of casts the lad with the short rod caught a nice looking trout, about 12 inches which I would be pleased to catch. I heard him say that it had swallowed the hook and he could not get it out. I told him to hang on and that I would come round and give him a hand to get the hook out. It meant that I had to go back to the road bridge to cross to their side. The fish was not looking to well by the time I got to it but with the help of my forceps we got the hook out and the fish back in the brook. With a little help it soon swam off. I removed the barb from his hook and moved down stream.

About five minutes later they came down to me with another fish that needed unhooking, it was bigger than anything that I have caught on this stretch, a fat 16 inches caught on bread again. I must admit that I thought , what am I doing catching small fish when these boys are catching the big stuff.

I did catch few small trout further down stream but nothing even as big as the boys smaller one, never mind. 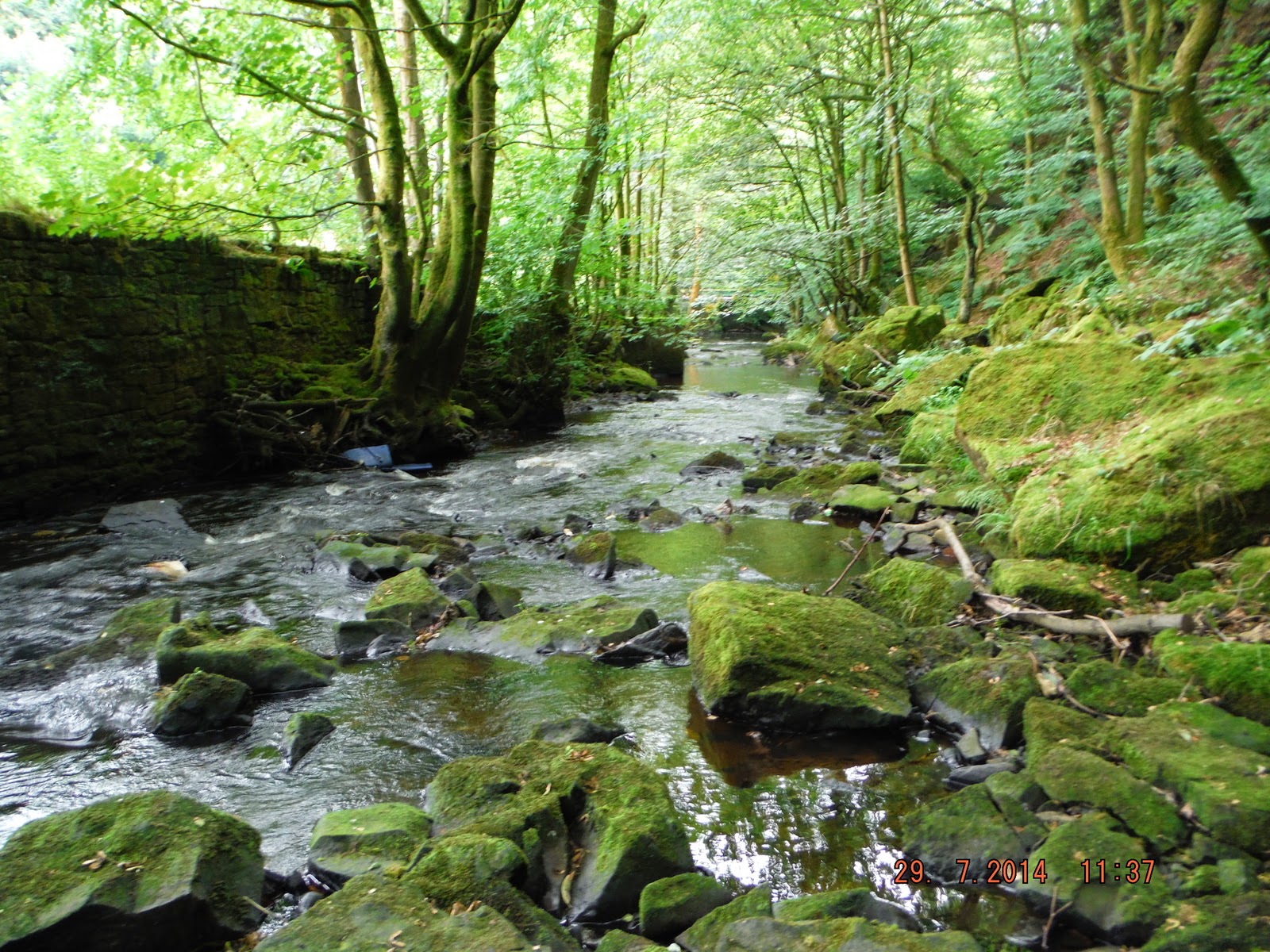 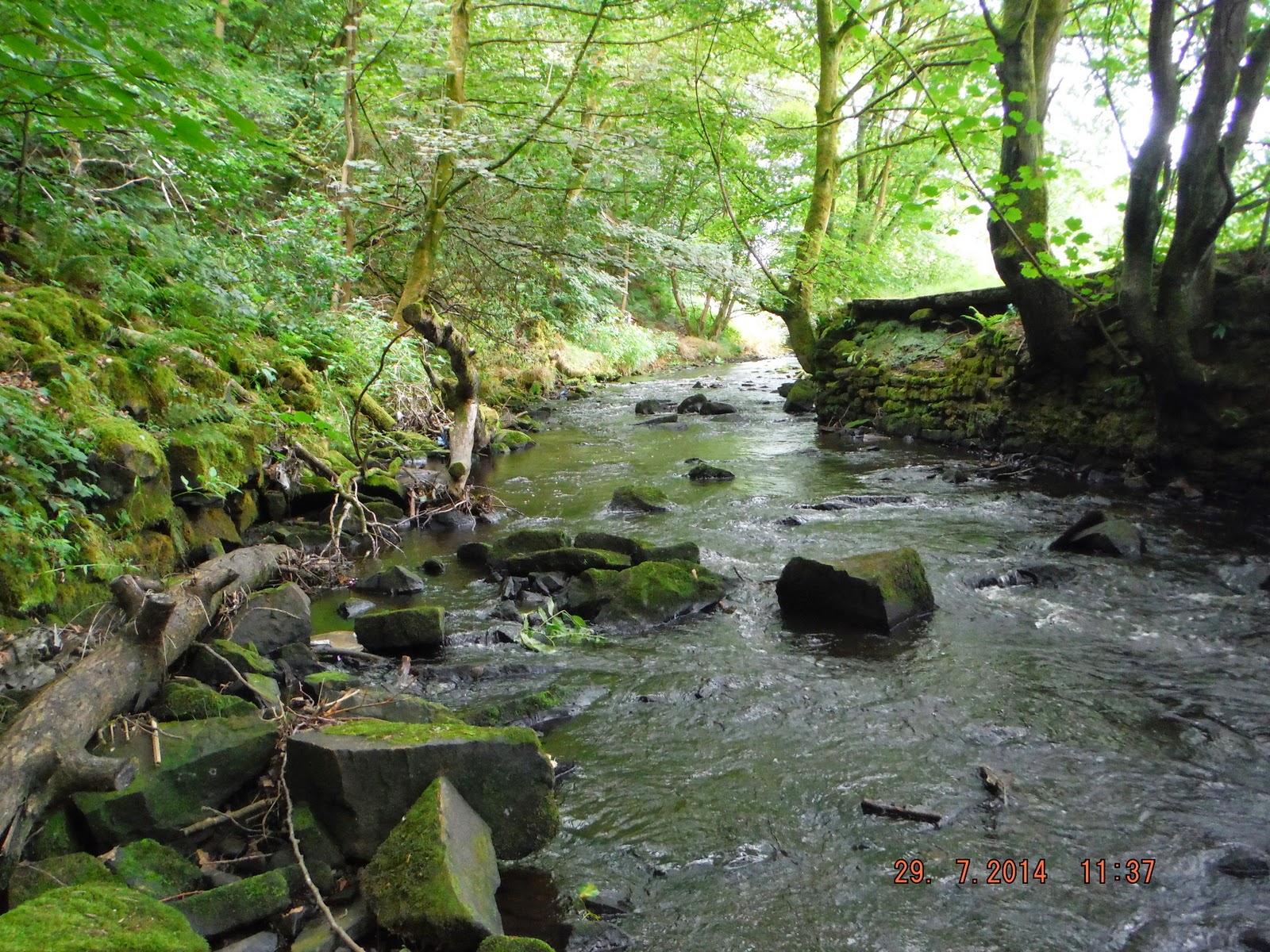 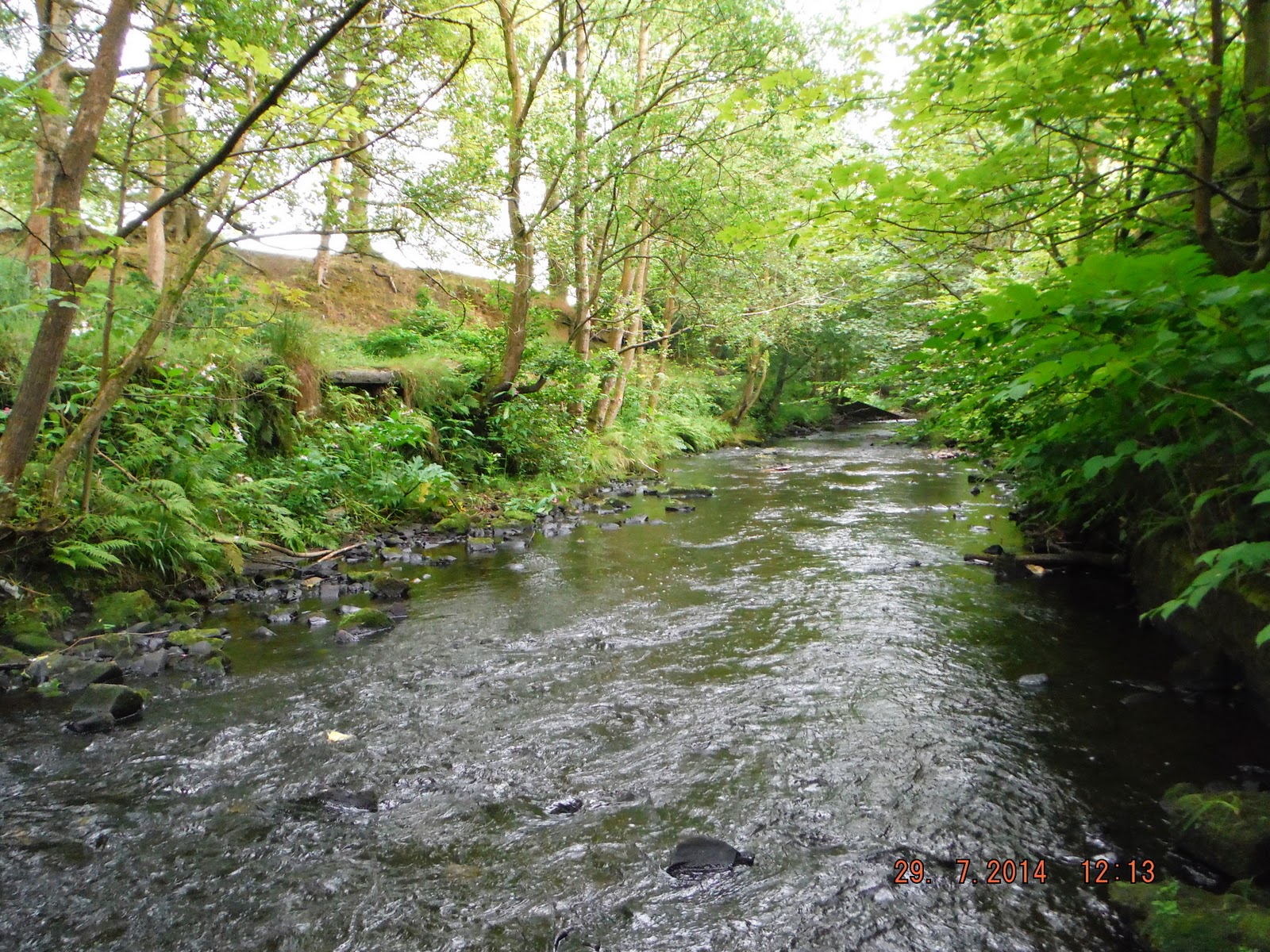 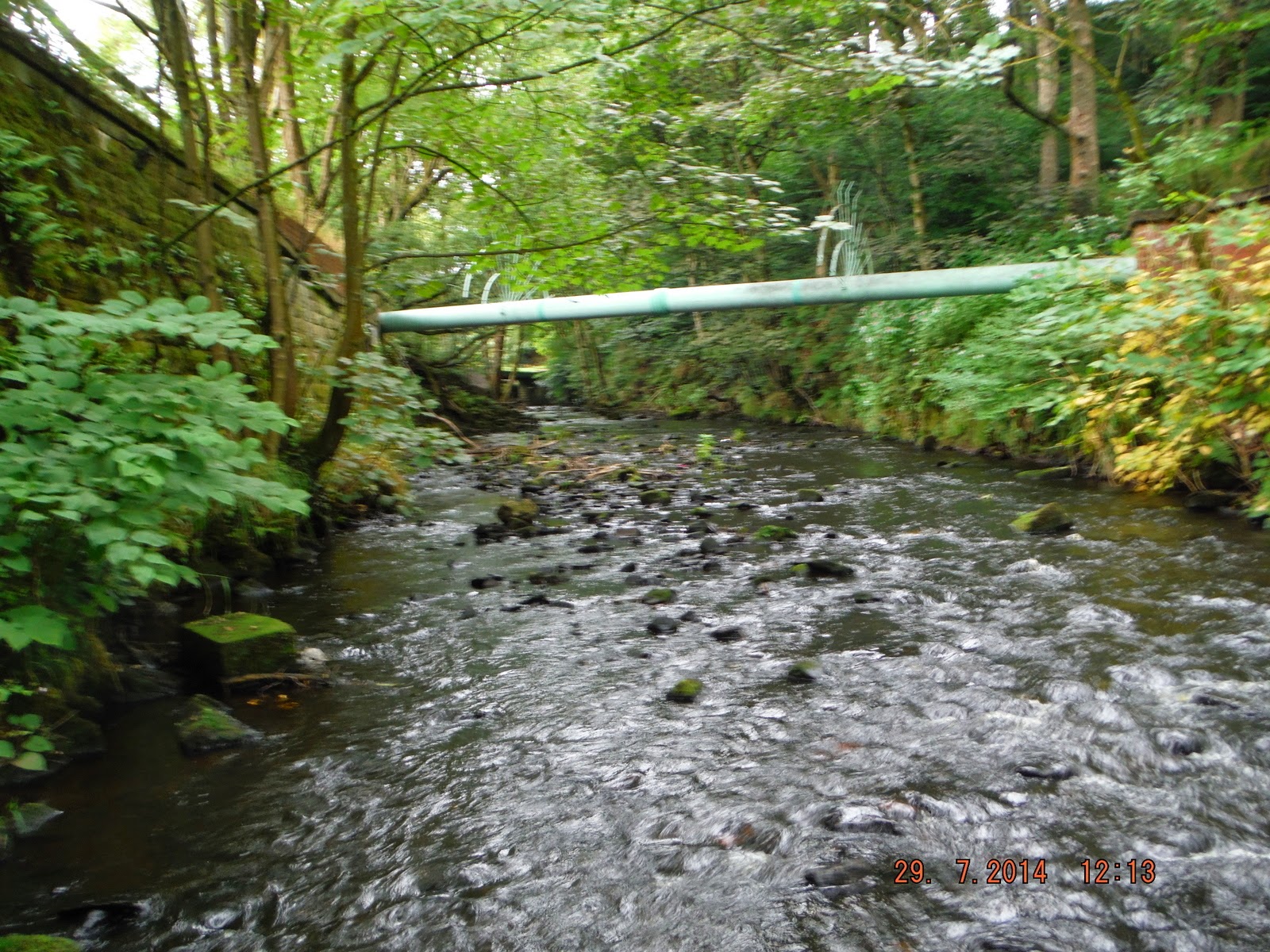 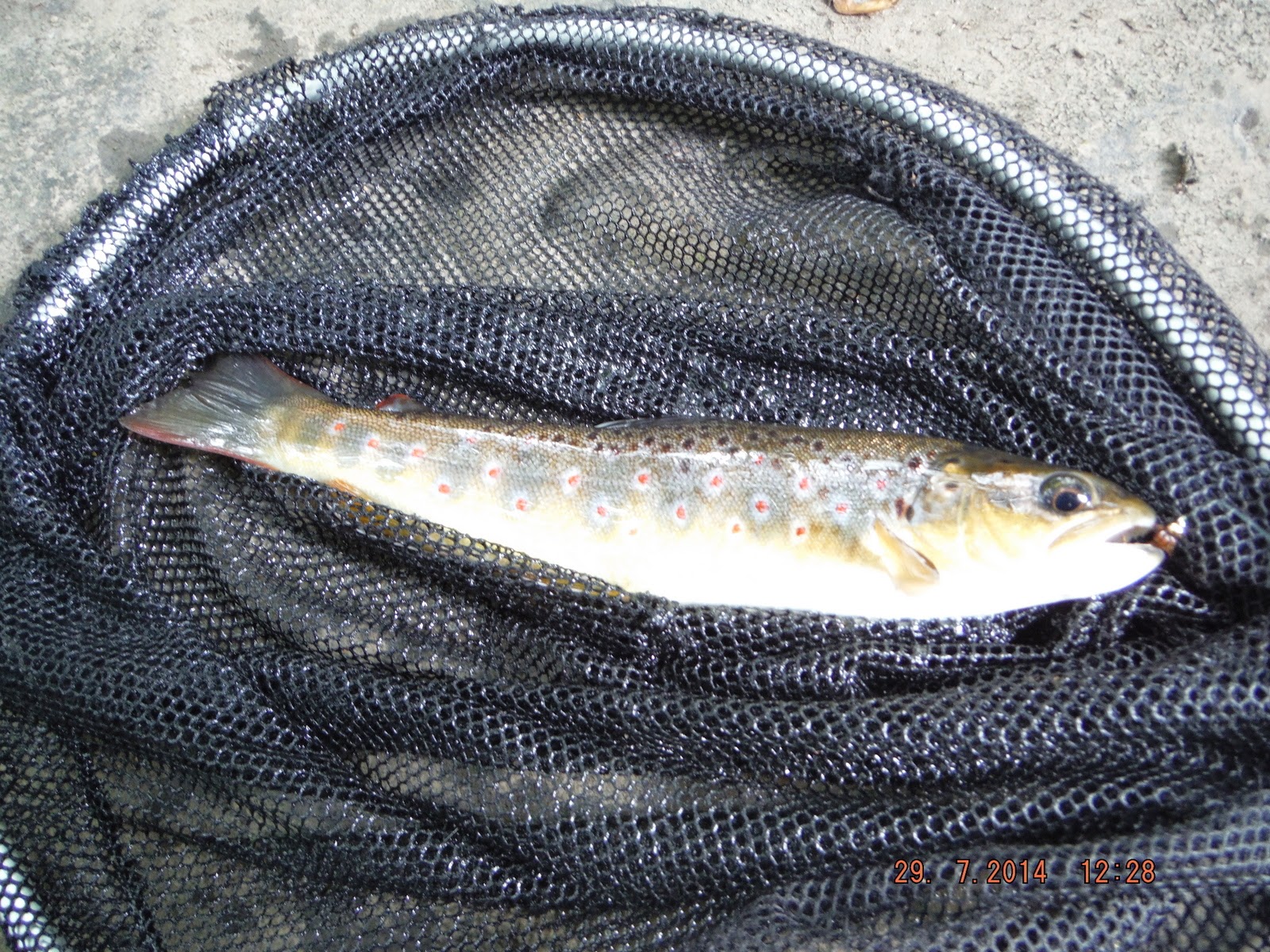 This is the best trout that I could manage. 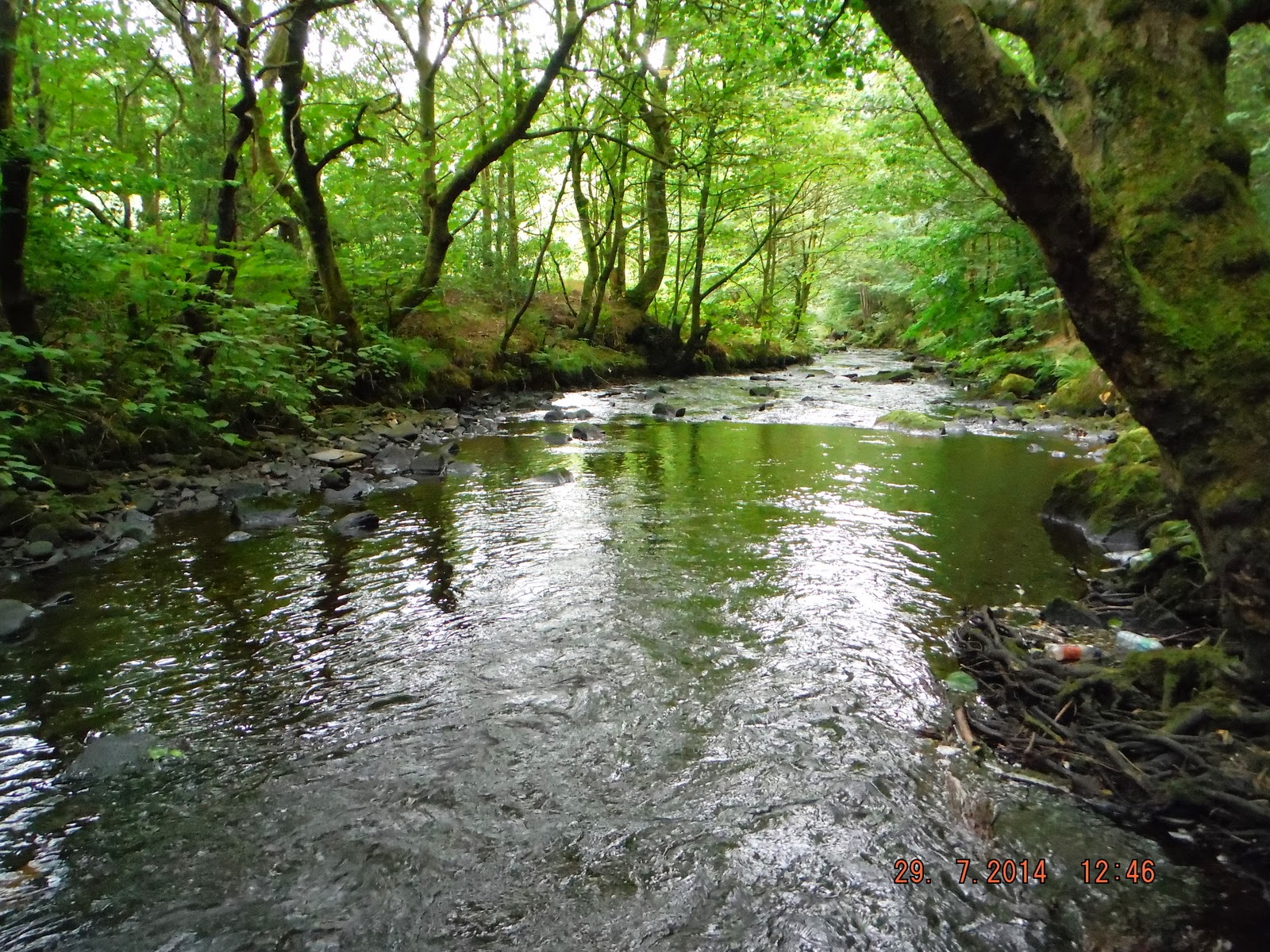 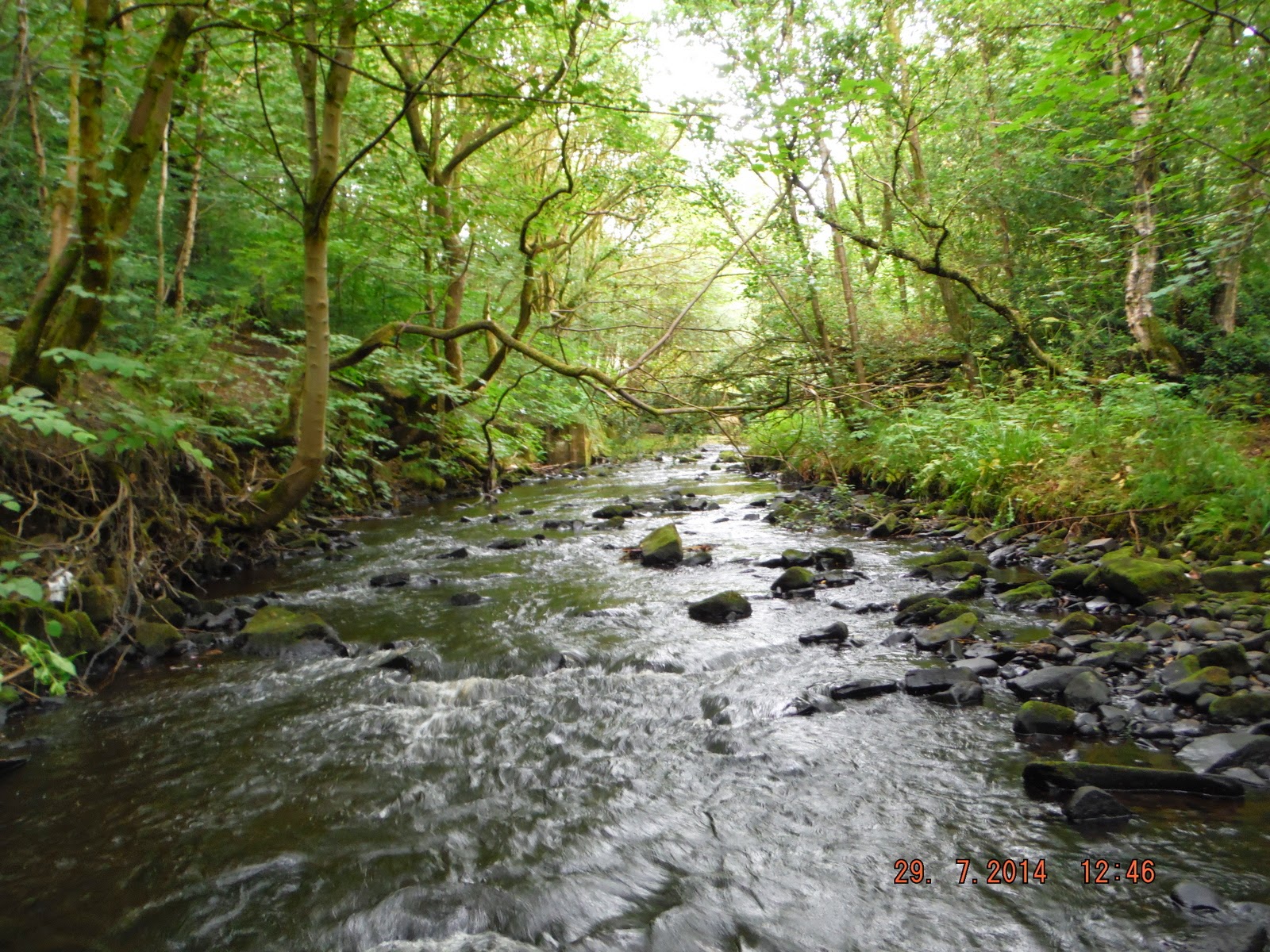 Not a lot of water, plenty of rocks and trees and not many fish.

Went back to the car and moved down river to the valley to another stretch that I have not fished for some time. I had to fight my way into and out of the river the Himalayan Balsam is every where and so are the brambles. Caught another couple of small ones before the rain  sent me home. 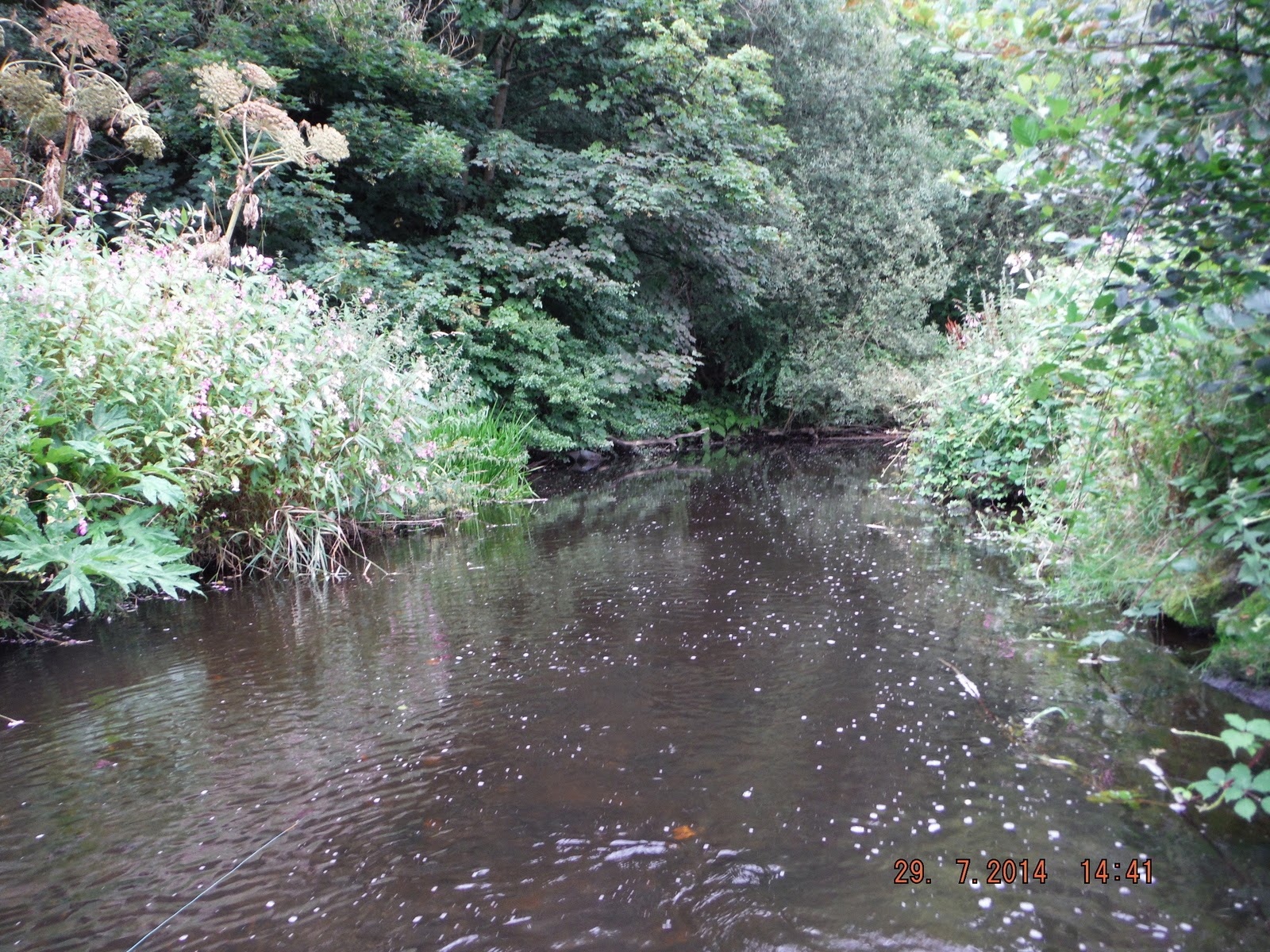 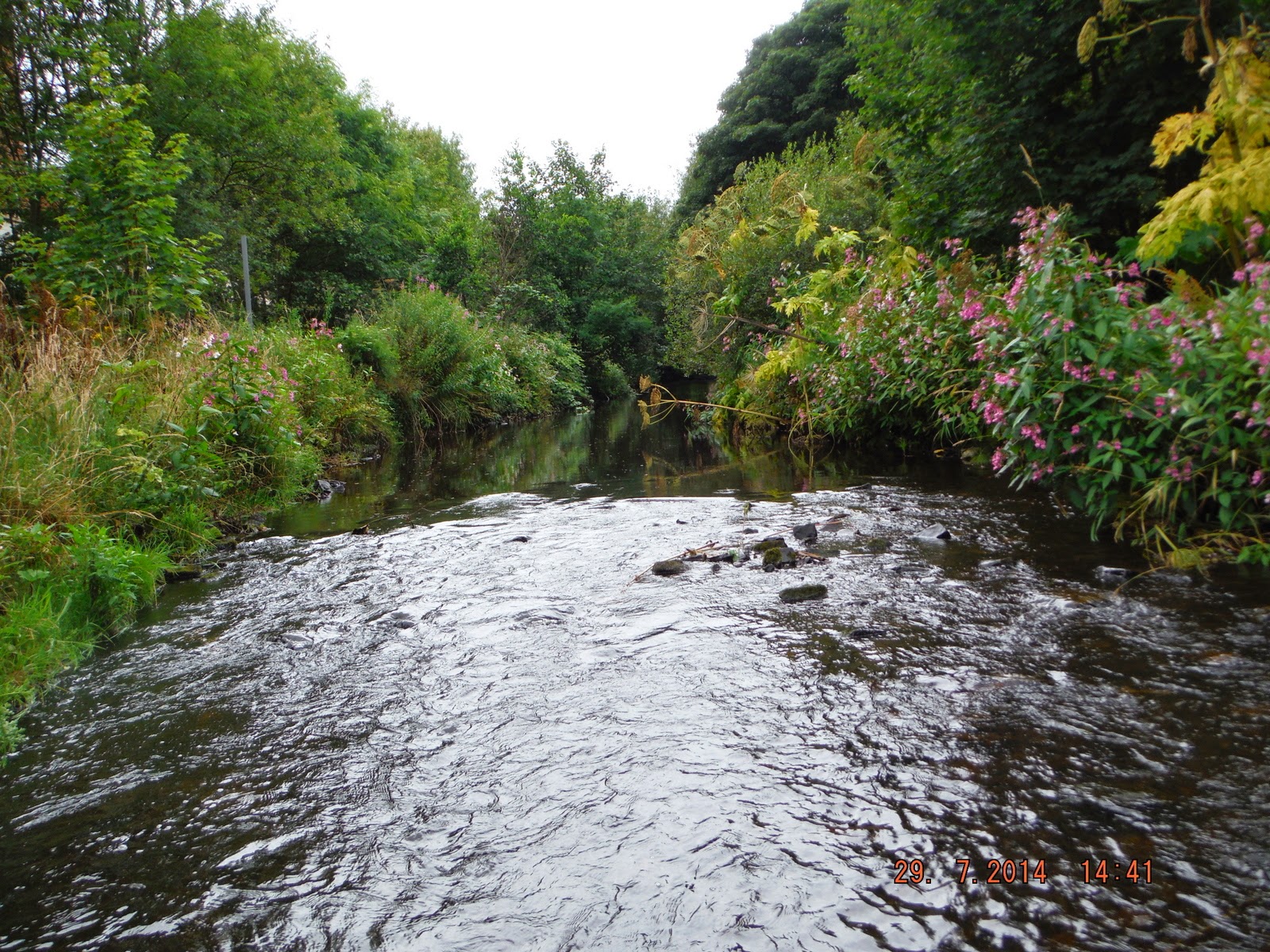 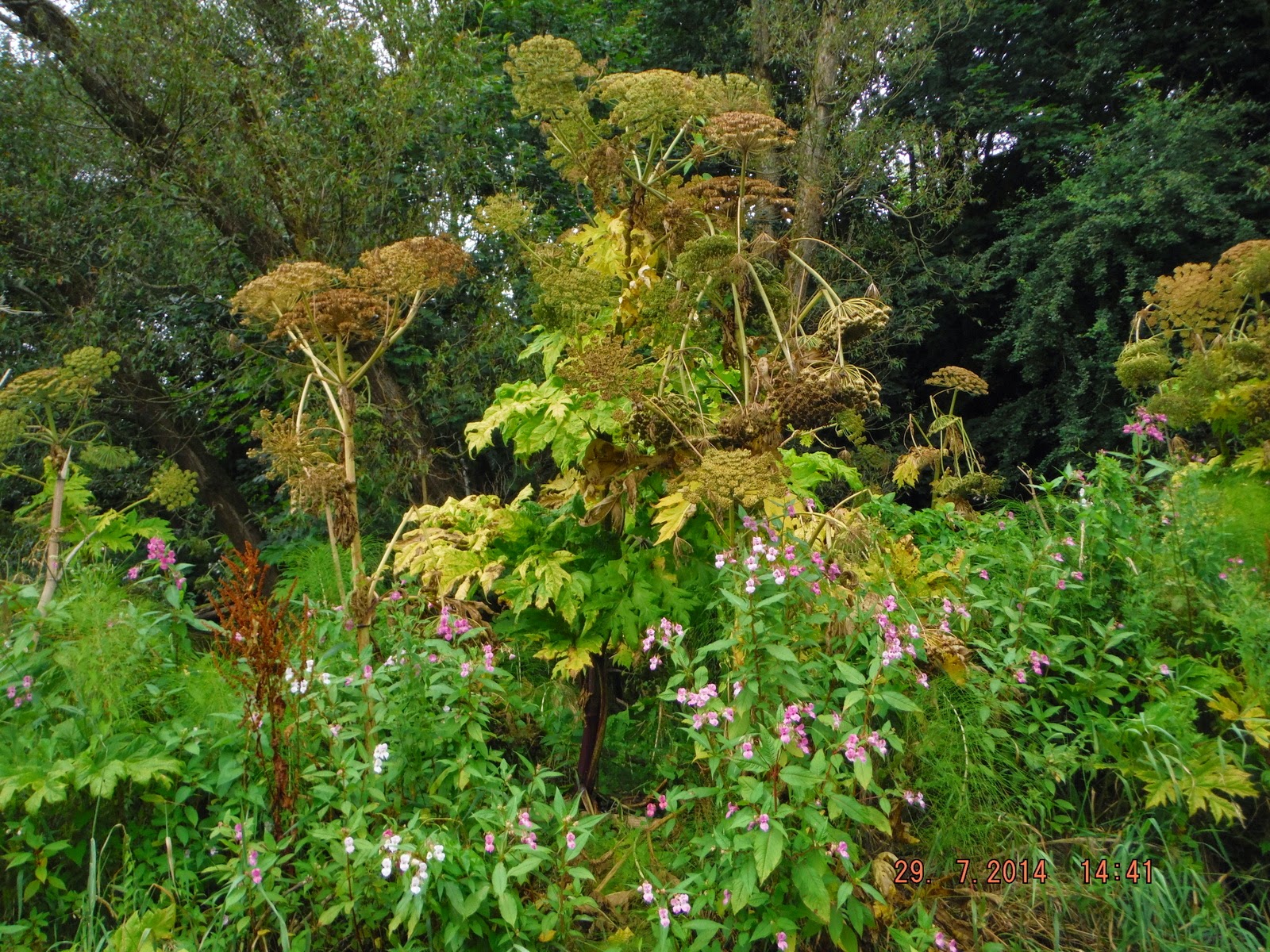 The Giant Hog Weed seems gets every where, some how it seems to be able to move up stream.

Rain showers are forecast for Thursday, Friday and Saturday I hope they put down more than the ones today.

Posted by Flyfishing the Irwell and other streams at Tuesday, July 29, 2014