Dull cloudy and very cold wind, got to the river by eleven. Plenty of water, more than I expected, but not a problem.
Had a walk down river and spotted five giant hog weed plants. This upset me as it is the first time that I have seen hog weed above Bury Bridge, masses of it below the bridge and all the way down to the ship canal. Went back to the car and got my Glyphosate spray and gave them a good wetting, checked further down glad to say I couldn't find any more. I will keep checking the area and the plants that I sprayed.

Waded across below the big weir and put two nymphs on, a copper john and a pheasant tail both gold head. Fished across and down in the fast riffle had one nudge half way down nothing else. When I got to the slacker water still nothing, changed the nymphs to a gold head shrimp and the black and red blob that my brother gave me. Had a nudge first cast and then nothing.

Had a sit and watch hoping something would start rising no such luck. Started back up upstream nymphing, got into a nasty tangle,had to sit down and sort it out, that cold wind caused it (maybe). Nothing again going back to the weir. Cold and miserable back to the car and then check out Sion Road.

Dismantled the rod then noticed a fish rise, watched for a while more came up. Tackled back up and went dry fly with an olive. Casting with the high bank behind me and the wind in my face was a problem and the fish were near the far bank. Had a couple come to the fly without taking before I hooked a small one. Moved up a few yards to a fish I could see rising nearer to my bank, took him second cast. 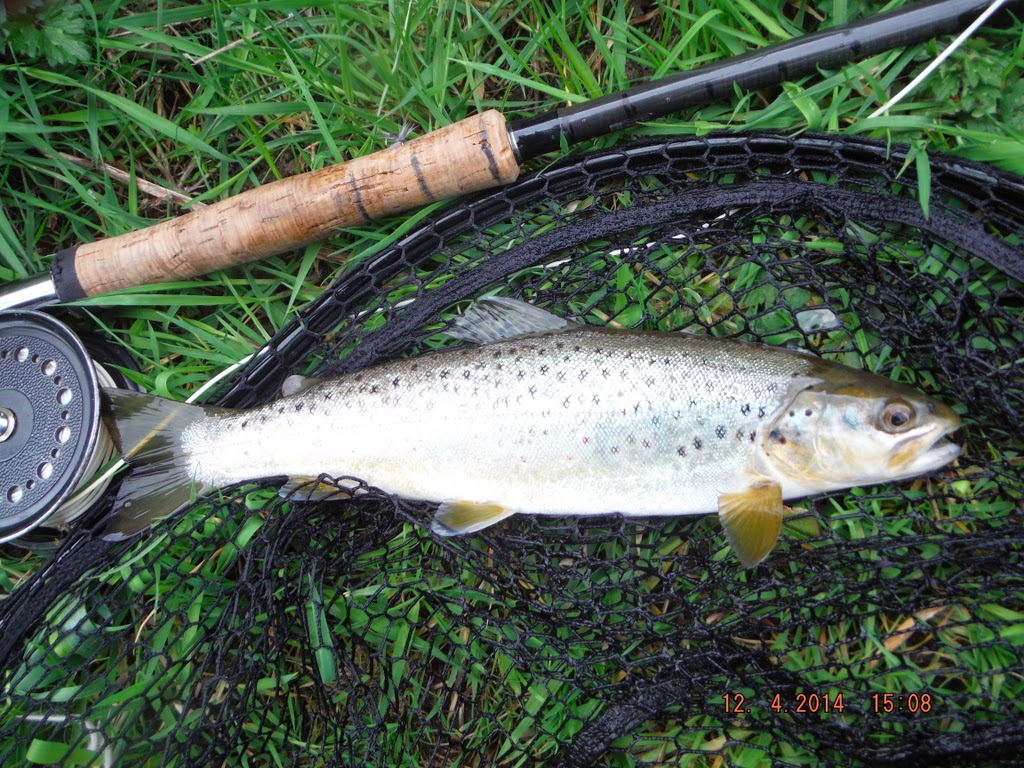 Gave it a couple of minutes to settle down then cast at another rise. Big take and most of my line and the fish went down stream. Took some time to get it to the net, I could see it was the best fish of the season, so tried not to rush it.
Lucky for me a car had just pulled up and another fly man got out, asked him to take the photo, which he did. 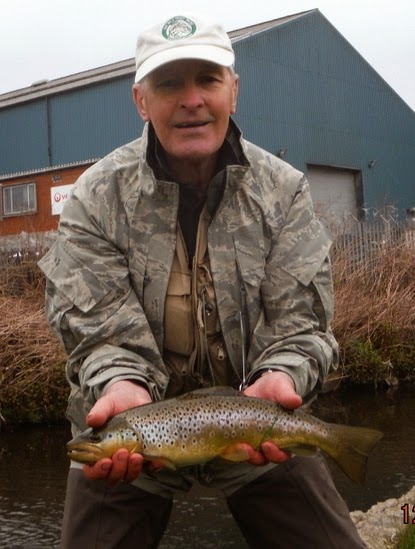 We reckoned it was a two pounder certainly fought its weight. got the fish back in the water. 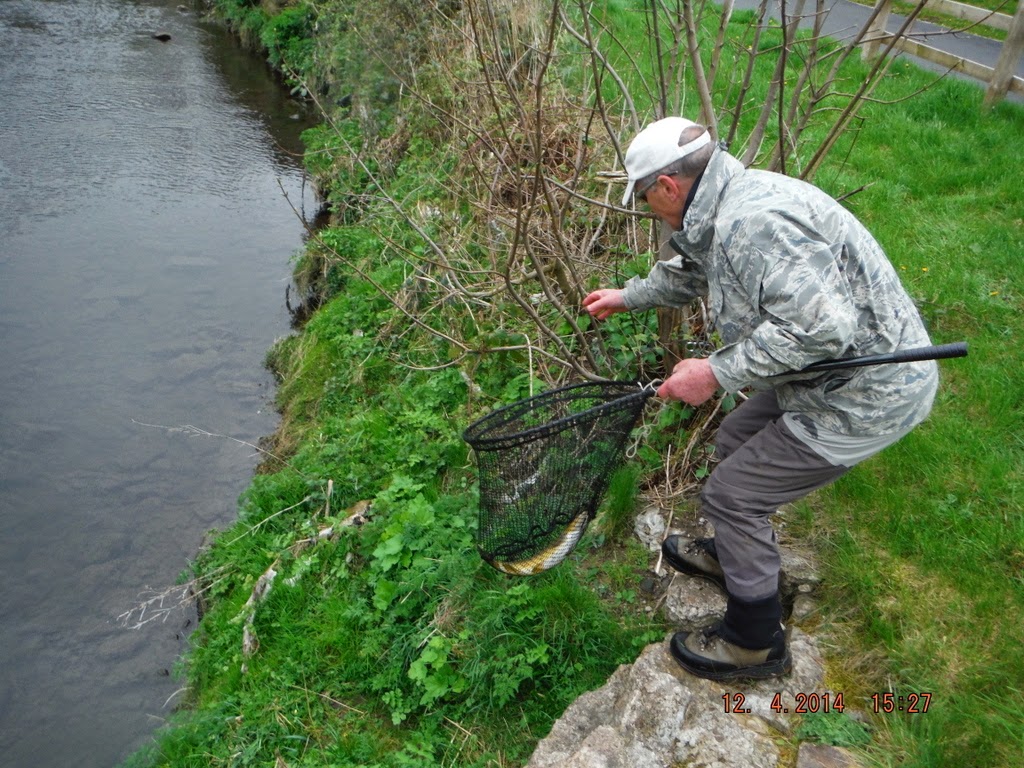 Old man trying not to fall down the bank. 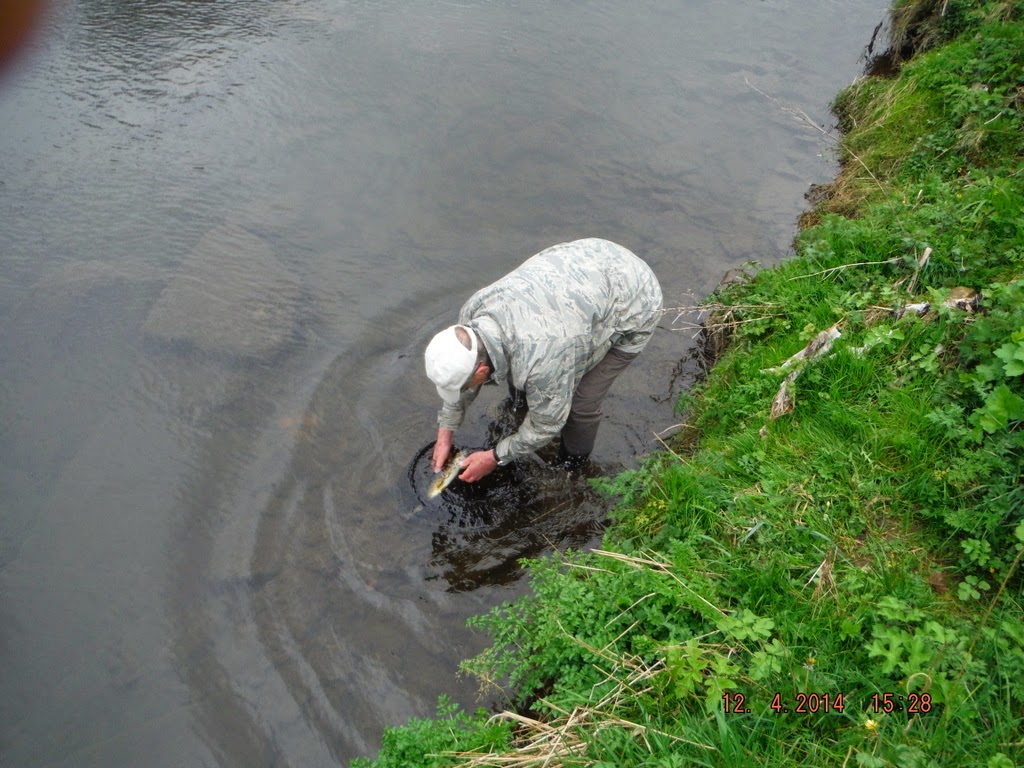 Long way back down to the water.

Then had a chat turned out that AL had seen my blog. Good talking to you AL. I liked the seven foot three weight rod that he had, light as a feather. I have 6' 6" and a 8' in carbon and 7' split cane. I now want a 7' three weight carbon like his with a light weight reel to match.

Posted by Flyfishing the Irwell and other streams at Saturday, April 12, 2014