Monday night we had heavy rain making the rivers and brooks unfishable, well for me that is.

Last year I noticed that there was three hog weed plants at the side of Eagley Brook just above the road bridge at Eagley Mills. I had not seen any plants by the brook higher up stream than theses three, so I chopped them down to stop them seeding.
The plan is now to get a suitable weed killer and spray them. Went online and downloaded a Countryside Management Publication on the control of Hog Weed. The recommended  chemicals are Glyphosate (Can be used near water) and Triclopyr (WHICH IS NOT TO BE USED NEAR WATER).

Glyphosate was of course my choice, you can get it in various brands, I went looking for "Barclay Gallup" and "Roundup Pro Biactive 360" which are both Glyphosate based. My local garden centre had the Roundup, in a concentrated form, which you mix with water and spray the plants whilst they are still small. Its not cheap, but its only money. Also bought a pump up spray gun.
The main safety warning was that it kills all plants not just the Hog Weed.

It goes without saying that the Hog Weed it's self is dangerous if you touch it or get the sap on your skin.

This morning I was down at Eagley Mills checking the water level, it was down enough for me to be able to wade to the Hog Weed plants, which I did and gave them a good wetting. Noticed that there were some other plants a bit further up stream, waded up and sprayed them. Sad to say each time I moved up I notice more plants, I sprayed until I had nothing left, and could still see more plants.
My hope that I had found the top plants on the brook has proved to be unfounded. What to do, I will sleep on it and decide tomorrow.

Hoping the Roch would be down and clear, I went to Heap Bridge in Bury. It was down a bit, but not too clear, started with a goldhead copper john, not expecting much, proved to be right, I did catch one small fish. 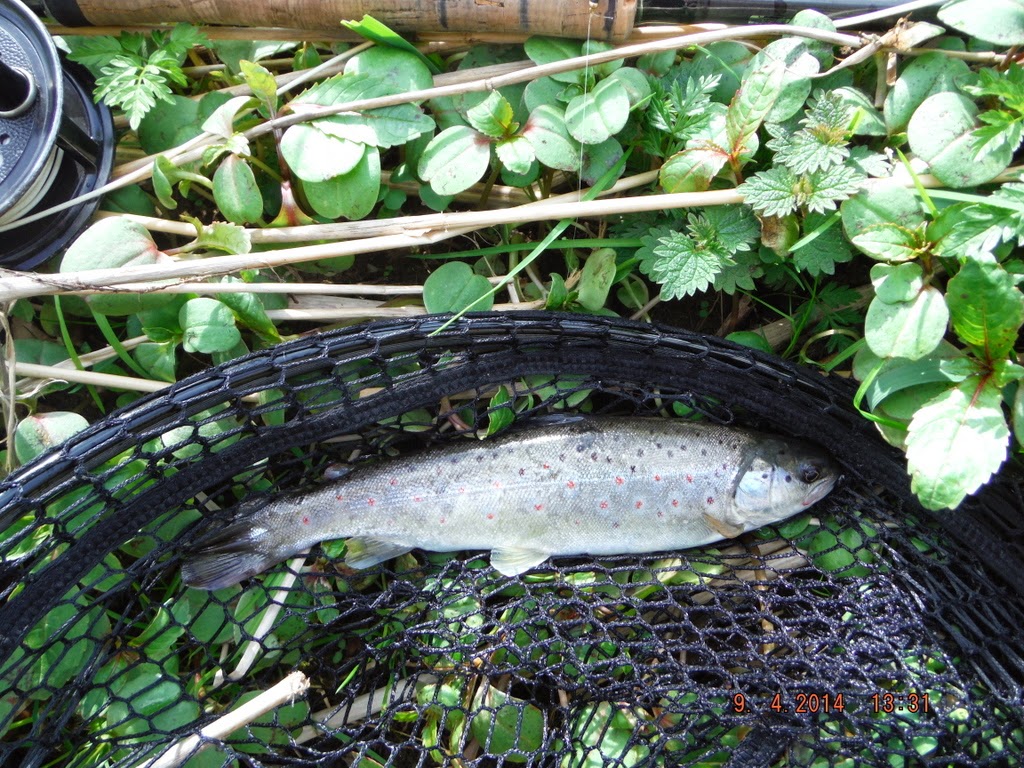 Tried a couple of other nymphs, but nothing to them, where do the fish go when it's a bit high and cloudy. 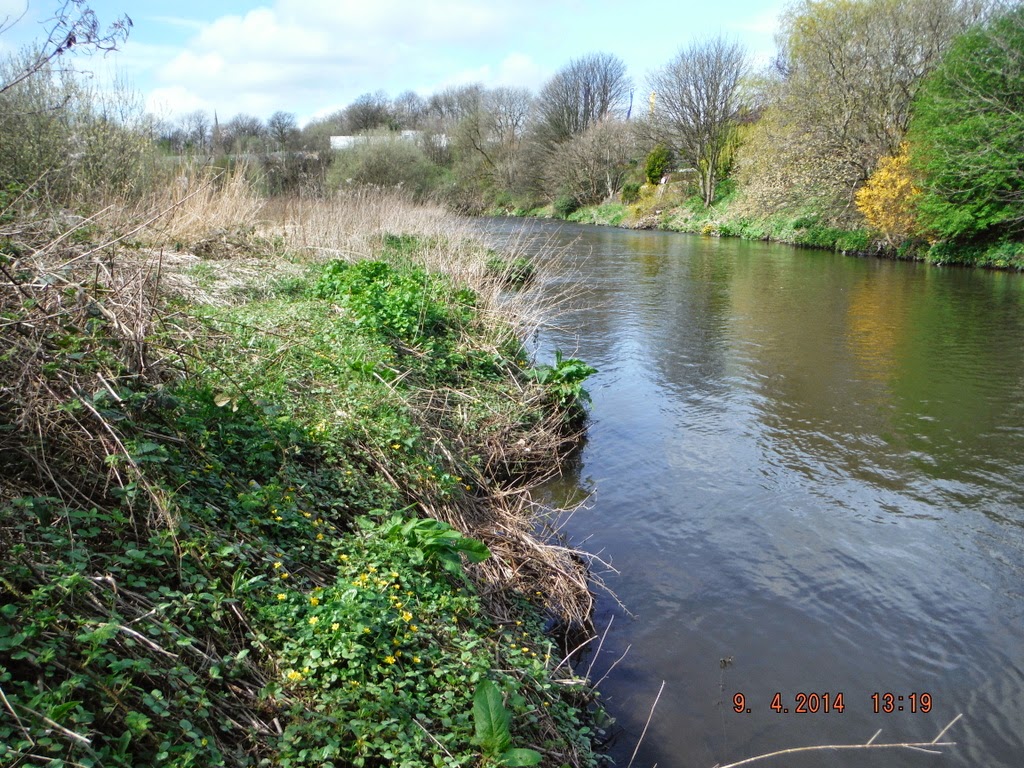 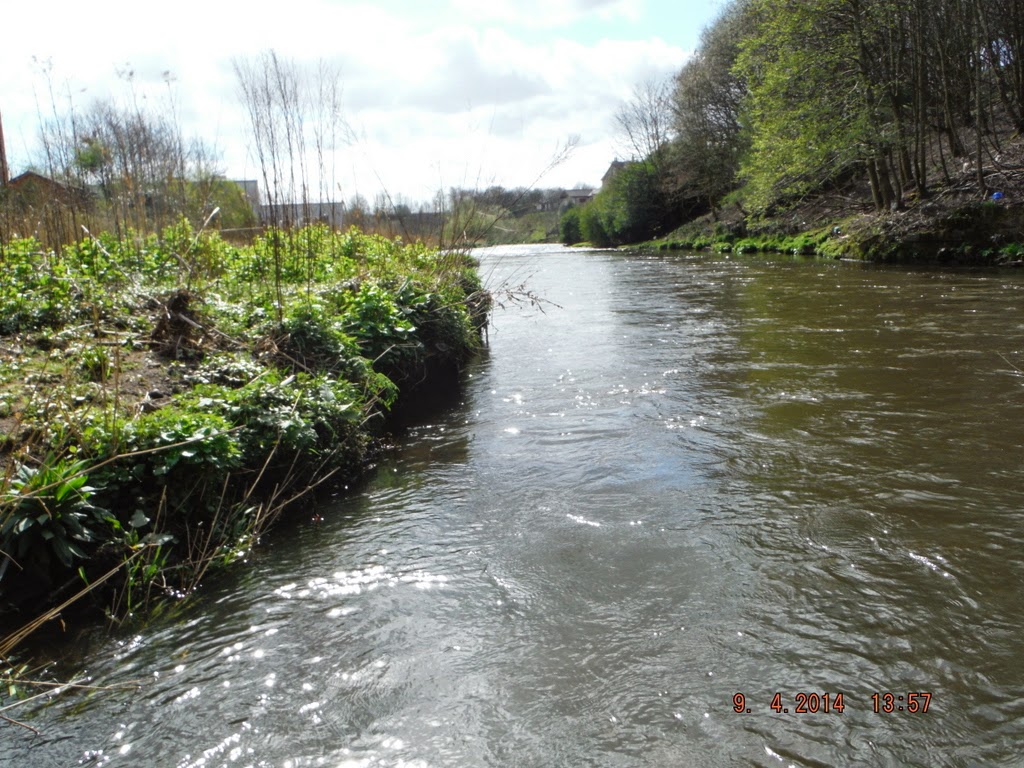 Back to the car and went up river to Heywood, a place that I have not bothered to fish for two years, with good reason. The first and last time I fished there I found lots of dead trout in the river,
I called the Environment Agency and one of their agents came and traced the problem to a stream and a mill at the bottom of what I call Ashworth Valley. Never did find out if any action was taken against anybody.

Not a very long stretch but it does look like it should hold some good fish, not that I caught any. 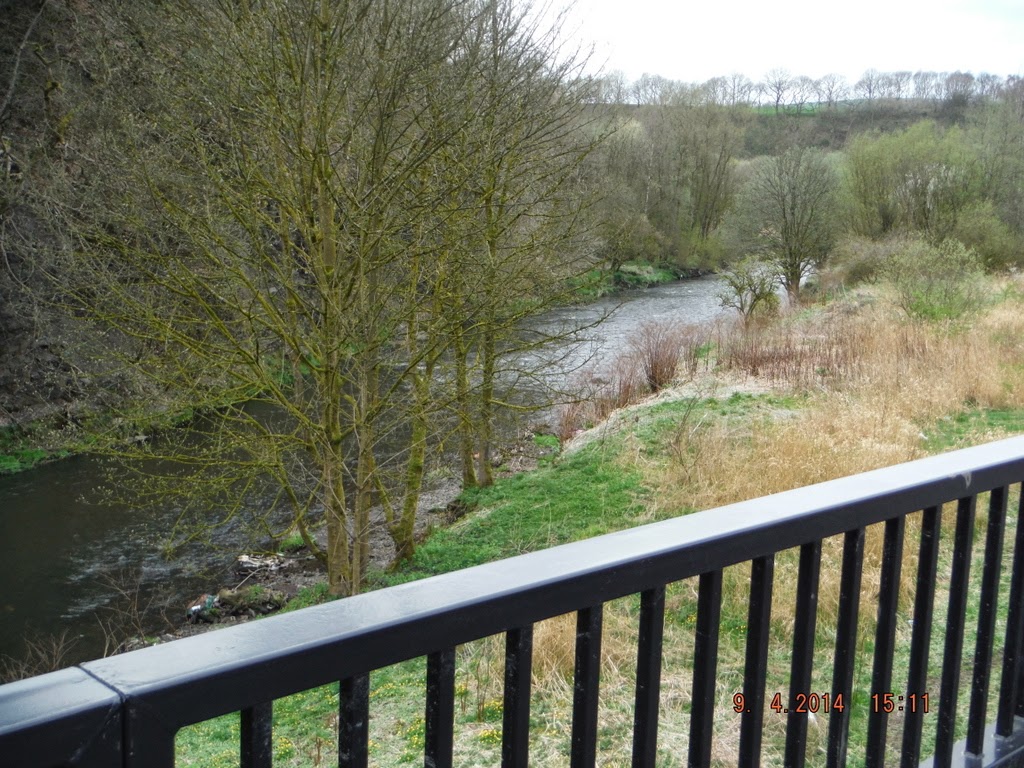 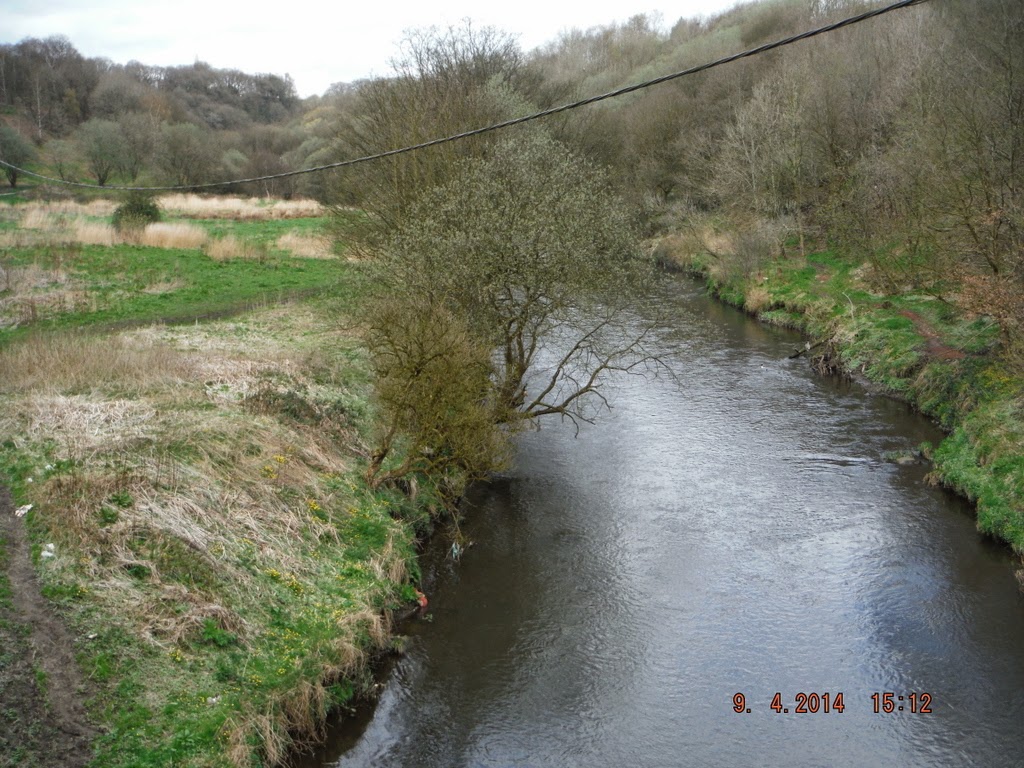 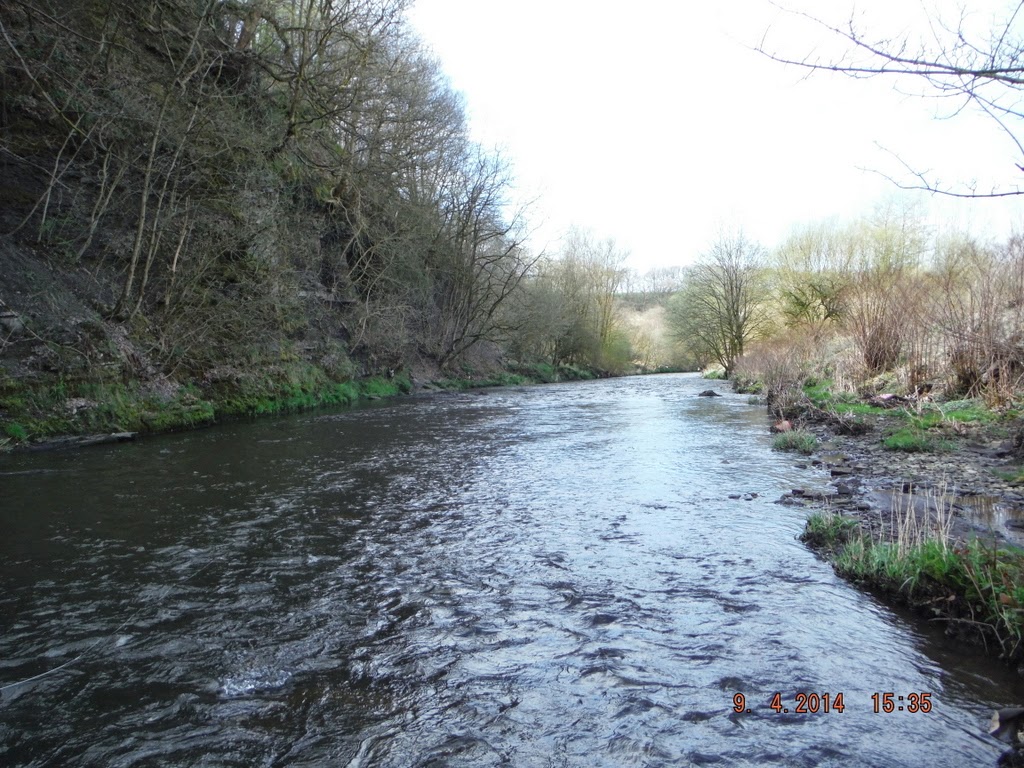 Looks OK as long as you take the photos looking the right way, if not you see other things. 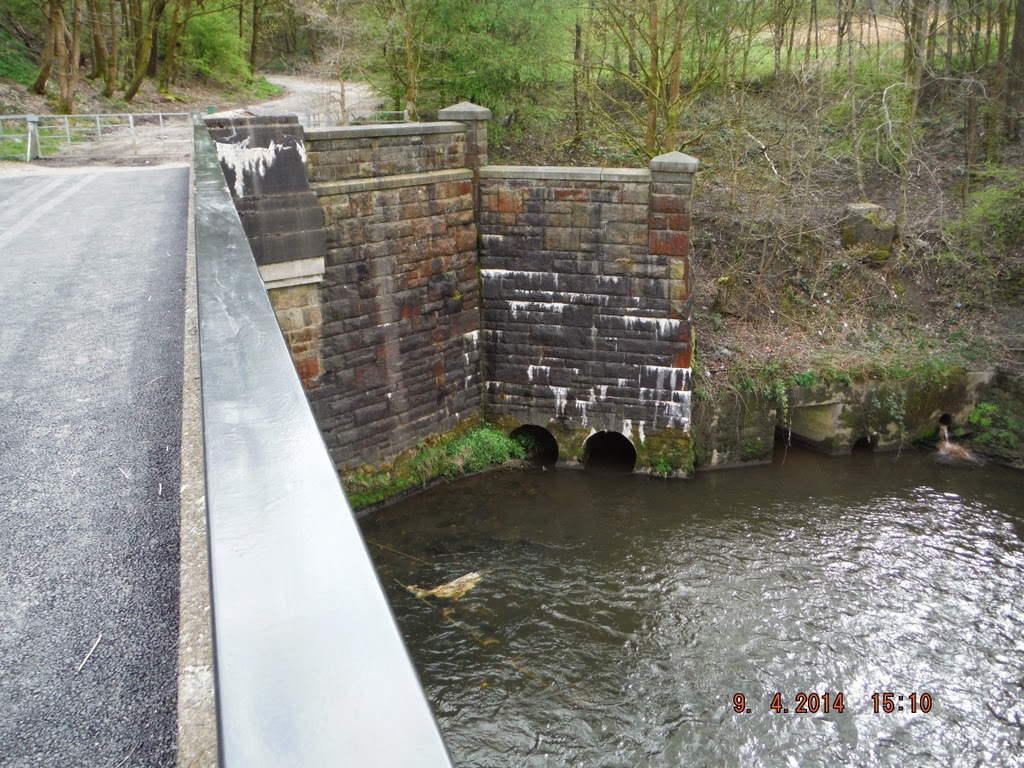 The Bridge is only there to carry the sewer pipe that runs under it and give access to the pumping station in the ground behind me. 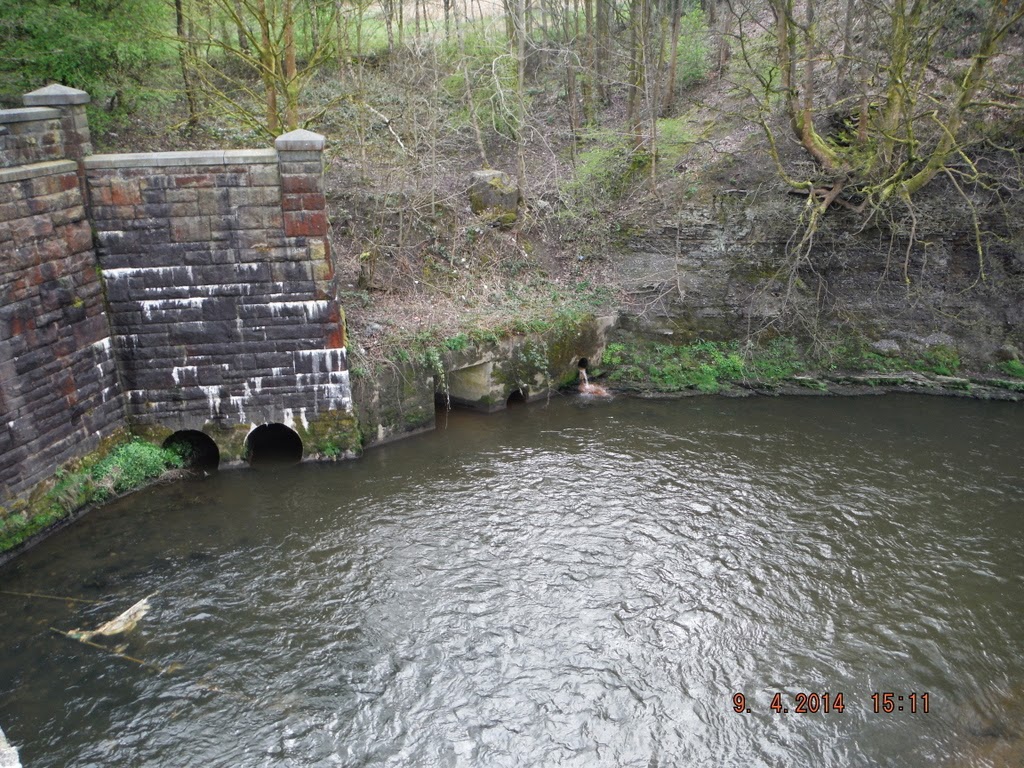 Posted by Flyfishing the Irwell and other streams at Wednesday, April 09, 2014