After at long last catching a fish their on Friday I decided to give it another try.

Four hours fishing for one fish, at least with this one it wasn't just cast and hope. I started fishing with a pheasant tail nymph and doing nothing so I thought, put a copper john on its the one that has been catching the fish.
There had been nothing rising and then one did, about thirty foot away, over the weeds near the far bank. Rather than changing to a dry I cast the nymph a few foot above where he rose. Third cast he took, I kept his nose up so that he could not get into the weed, to be truthful I bullied him to my side of the river. I didn't want Sundays problems when it got stuck in the weed. 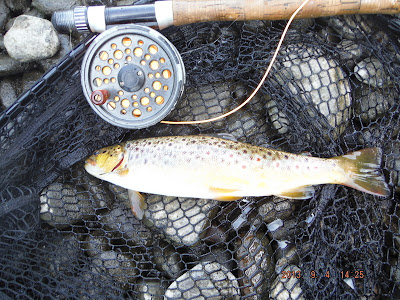 OK not a monster but I was pleased to catch him, though one fish per trip may not be enough to get me to keep going to Ladyshore in the future. I did see one other fish rise but that was it for the afternoon.
Posted by Flyfishing the Irwell and other streams at Wednesday, September 04, 2013