Monday.
The weather forecast was for white cloud and plenty of sun, what we got was complete cloud cover and drizzle. Am I surprised, not at all. At least it wasn't to cold.
Drove to Ewood Bridge using the top road above Ramsbottom, Peel Tower on Holcombe Hill was shrouded in low cloud.
The fishing was poor, only one fish on a Adams dry, there were several fish rising in the pool in which I caught him, but his jumping and splashing, put paid to any chance of catching them by the time he was in the net. 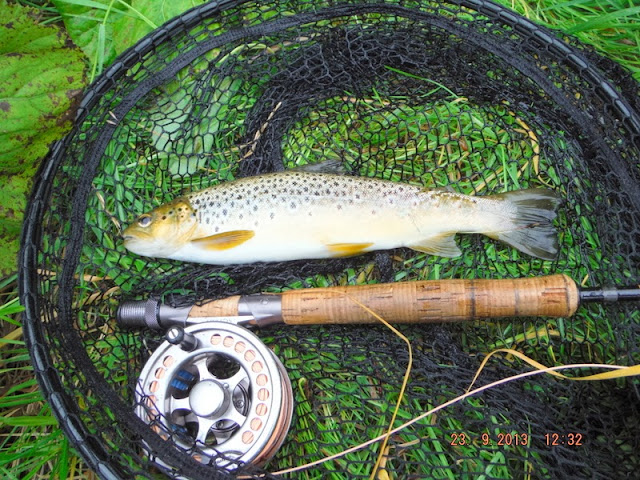 There was a fair rise in progress at the time but it did not last. Two or three fish rising further up stream but no takes to either a Adams or b-wo's even tried a nymph still nothing.

To top of my day  I had a puncture, on a narrow lane with no where to stop, on the way home. So I now need a new tyre.

Tuesday.
Tried the Irwell at Radcliffe today, got nothing to the net and only hook one fish.  Which unhooked is self after its third jump. At least the weather was an improvement on yesterday, warm sunshine almost all day.

Posted by Flyfishing the Irwell and other streams at Monday, September 23, 2013