Went to fish at Eagley Mills, surprised to find it quite low but with some colour.

Tackled up with a 6' 6" 3 weight and fished a blue wing olive, one of a batch that I ordered from a new supplier. The flies looked very good and they had put me in a couple of extras, very kind of them.

Had a rise to my first cast, saw him coming to the fly and struck to early, nothing wrong with the fly just nervous me. Caught four very small fish and decided to move to Bradshaw at Seven Acres.

The brook was running very dirty and no fish rising despite plenty of flies coming off the stream. Tried a Copper John to no avail, until I came upon two chaps trotting maggots.They had had nothing either but said they had seen fish rising now and then. Carried on a bit further down, still nothing, so I packed in and decide to see where the mud was coming from.

I knew that United Utilities were working on the Bradshaw Flyfishers Beat making good a sewage pipe that runs across and in the stream. So I thought that they would be the culprits and went to have a look.
I was very surprised to see what they were doing.
I had thought that it would be quite a small work site, not the case. They had driven steel pilings in the the stream bed and were blocking half of the flow prior to, I believe, concreting around the pipe. Then doing the other half of the pipe in the same way. They said the piling would remain but would be cut down, which I would think will give us a small weir.
Not good if that is turns out to be the case, as the removal of weirs that prevent fish movement is part of the European Directive on improving rivers and streams.

I did not take a photo of the site but I will tomorrow. Watch this space.
Here's the Photos 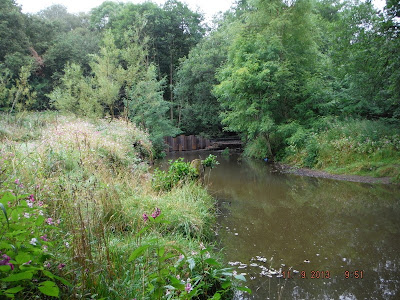 This is looking up stream. 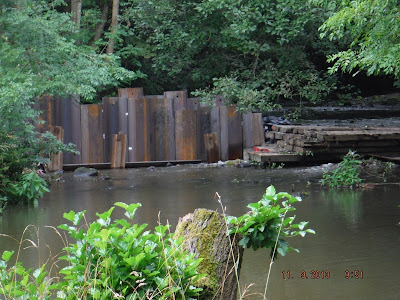 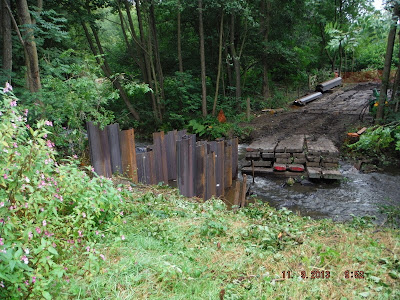 The ramp and piling. 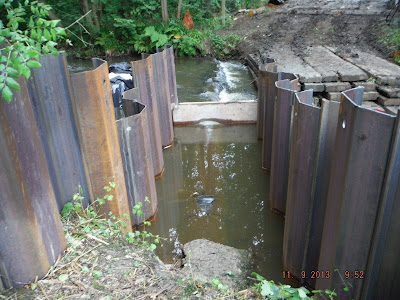 Its not very clear but the pipe is between the piling.

Most of the stream is running under the wooden ramp. The water between the pilings will be pump out and concrete poured around the sewer pipe. Then the same to the other half of the pipe.
Posted by Flyfishing the Irwell and other streams at Tuesday, September 10, 2013