Day started badly, a cormorant and three goosanders were fishing the river as I arrived, they flew off but that doesn't stop them fishing for long.
It was overcast and quite cold, didn't expect there to be flies emerging and I was right, just the odd one
.
Tied on a GH Copper John and started off down river, had to be careful as the river was up from last week but still running pretty clear. I didn't think there had been enough rain to make a difference.

The first hundred and fifty yards runs fast and I had not a touch, then the river slowed a bit but is still moving at fair pace when I got into my first fish. He came for the nymph and missed but two casts later he was hooked. Took off down stream them went to the river bed and stayed there so I had to wade down to him to get some line back on the reel. Changing the direction of pressure made him come up and he was soon in the net. 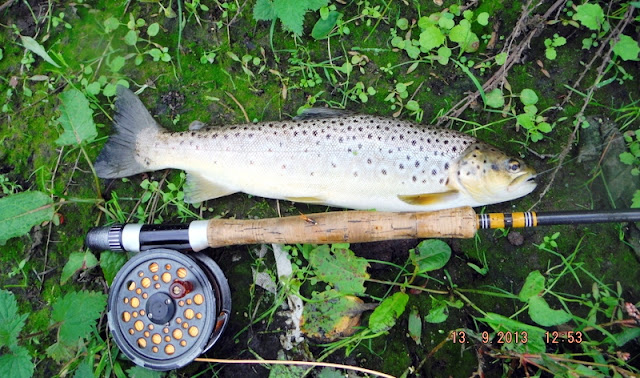 
Was soon into another one took a while to get him close, he saw me before I saw him and as he turned and took off the hook pulled free. Well that's fishing.

Moved down ten yards and was into another, good hard fighter like the first two and a better fish. 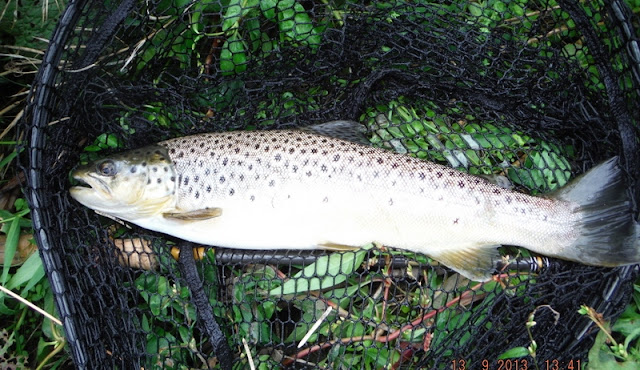 This one went 16 inches.


The next fish broke me off on the strike so I had my lunch, an apple, and tied another GH Copper John.

Moved a bit down stream and was soon into another good fish this one was about 15 inches, not much between the three of then really, still I would be very happy to be catching their ilk any day of the week. 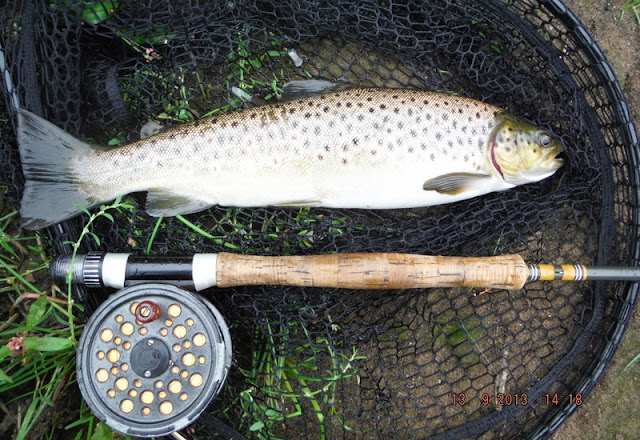 The rain had set in whilst I was playing the last fish but I was not for stopping, had another fish come to the nymph and miss before I decided to move..
I went further down stream to a fast run where I had caught fish before but I only got one fish to try for the nymph and he missed and wouldn't try again.

The way I fish the Irwell is with a floating line and try not to let the nymph go deep, so when the fish strikes  you normally see a good swirl and splash. Two reasons for fishing shallow are that the Irwell has lots of weed at the moment and even where it doesn't the rubbish in the river can cost you lots of tackle.

Didn't see the devil birds again just a Heron and they are OK with me.
Posted by Flyfishing the Irwell and other streams at Friday, September 13, 2013