Could not be bothered to blog Saturday and Sunday as both were poor for fish.

Saturday I stood in Bradshaw Brook in the pouring rain for 4 small trout, at least I know my new wading jacket is water proof.

Sunday I had better weather for a trip to the Roch in Bury, went to the Irwell first but it looked to up and coloured to fish so I did not bother. It's good having two rivers in Bury with sources a long way apart, if one is unfishable it does not mean the other will be the same, which was the case  yesterday. 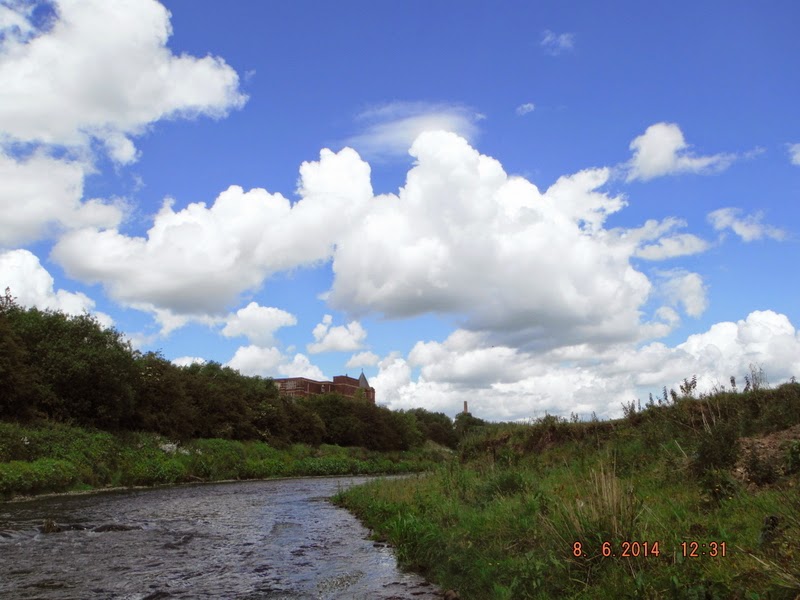 The good thing about England, or is it the bad thing, is the changeable weather. Saturday until tea time was miserable and wet, and yet the evening was clear and sunny, as was Sunday, until tea time when it started to rain.

The Roch looked fine for fishing but as it turned out not for catching. I fished nymph and did have a couple of knocks and did hook two fish, which both came off in quick time. 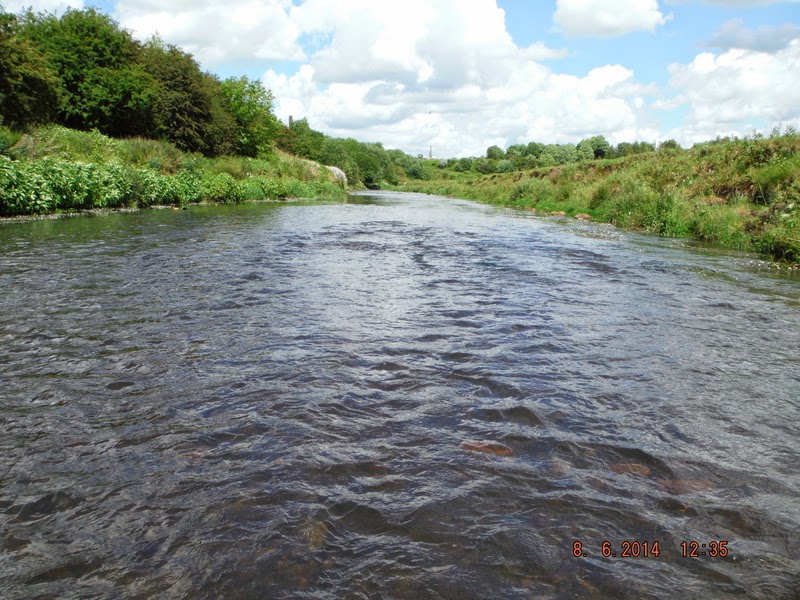 After 4 hours of no fish I changed to dry fly for my trip back to the car, I was nearly there when I  saw a fish rise between two rocks by the far bank, third cast it took, the result below. Not a very big one but very very welcome. 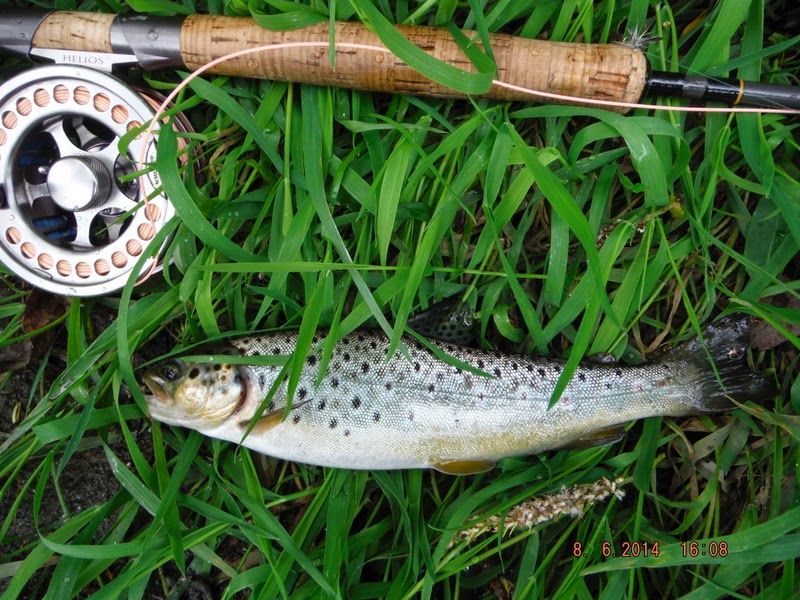 Monday the River Douglas had the pleasure of my company for an evening of dry fly. The weather was changeable as usual but I managed not to get wet, not quite true as all my fishing was done in the river which was deeper than when I last fished it.
I used a 6' 6" rod with an Iron Blue Dun and caught some fine trout. The Douglas never ceases to amaze me with the quality of the trout in, what is, a very small river. As I have mentioned in earlier blogs the problem or is it the pleasure, is the difficulty in getting in and out of the river to get a fly to the fish.
A few examples of the fish caught are below. Not all that I caught and not the biggest (honest). 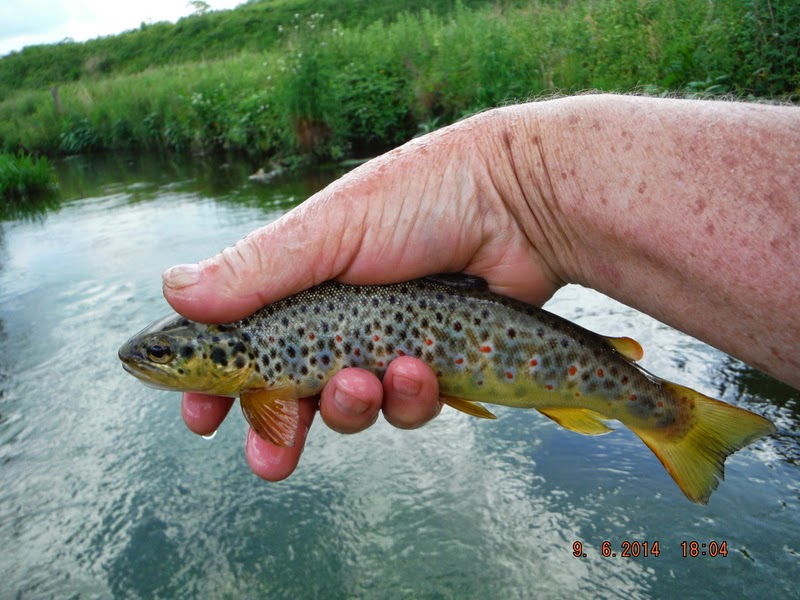 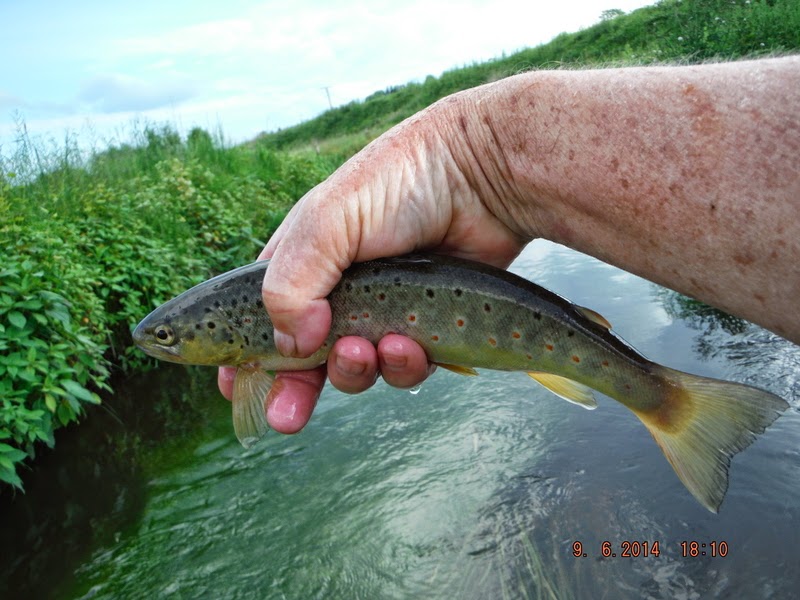 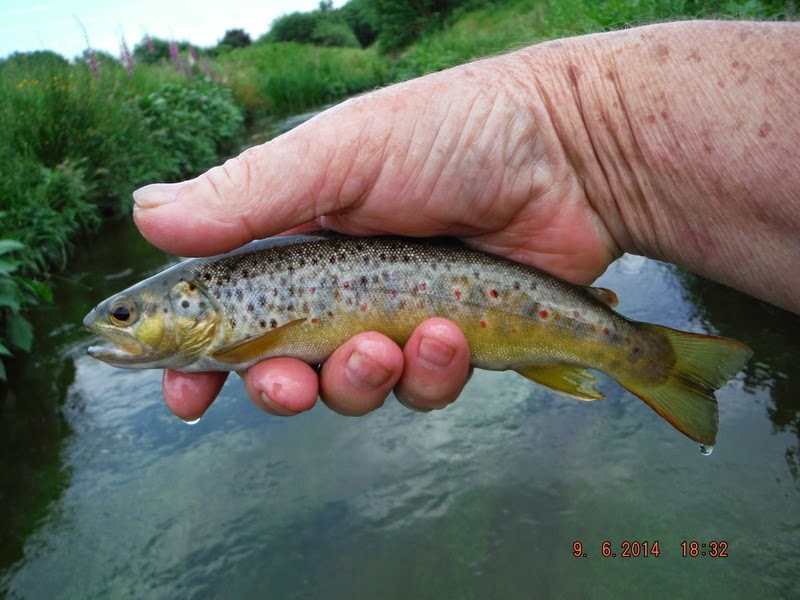 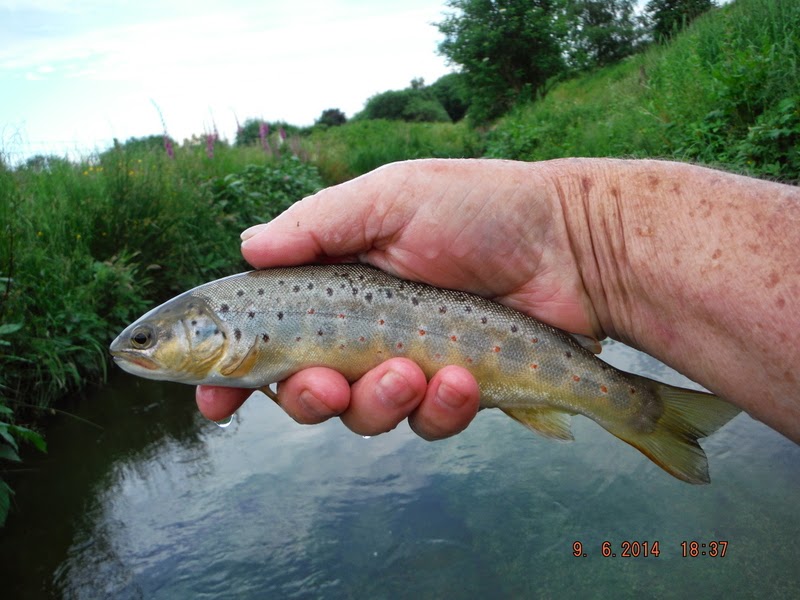 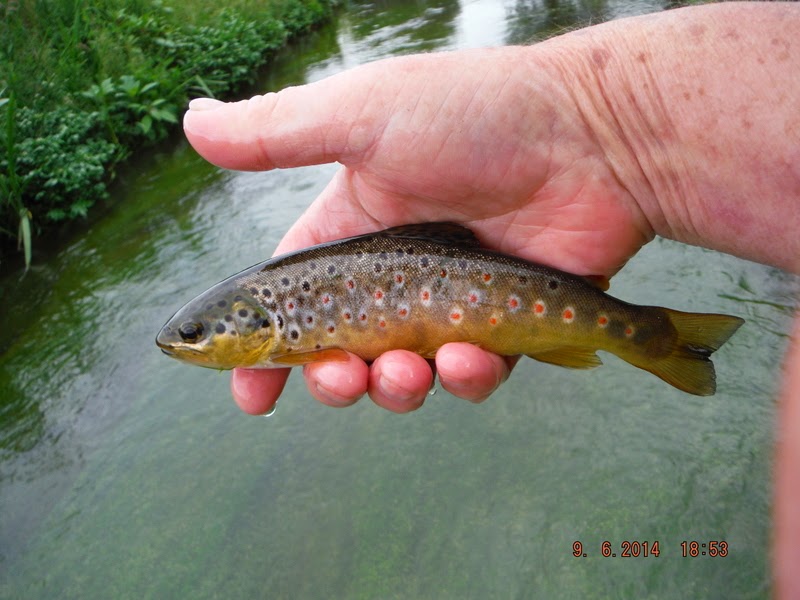 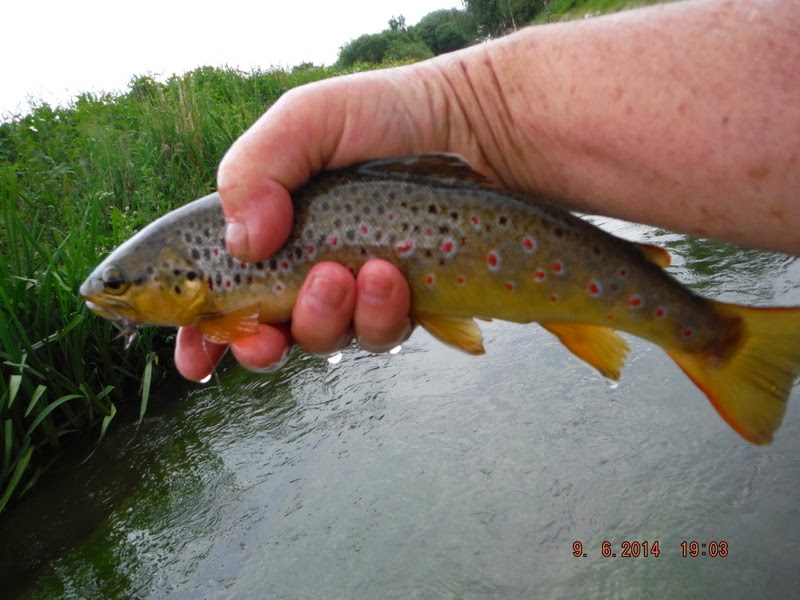 At one point I had a large audience of very interested youngsters who came down to the edge of the river to watch me fish, as usual whilst they were watching I managed to catch not a thing.
I apologized gave them a wave and moved on, I hope they don't think all fishermen are as bad as me. 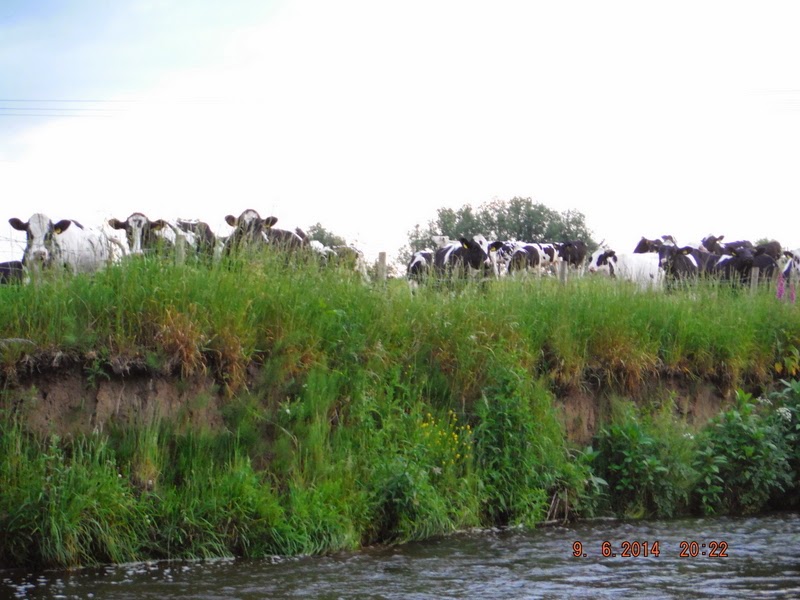 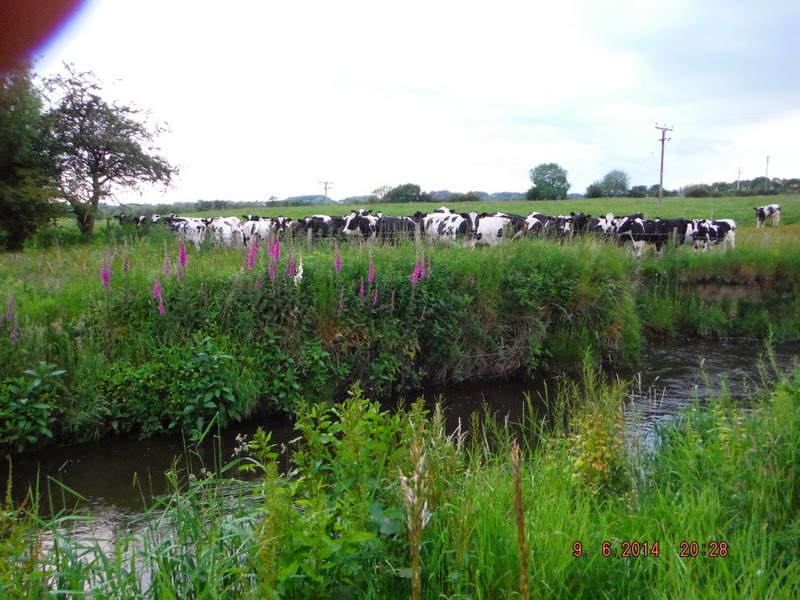 I did not get much response from them, just the occasional  MOO. 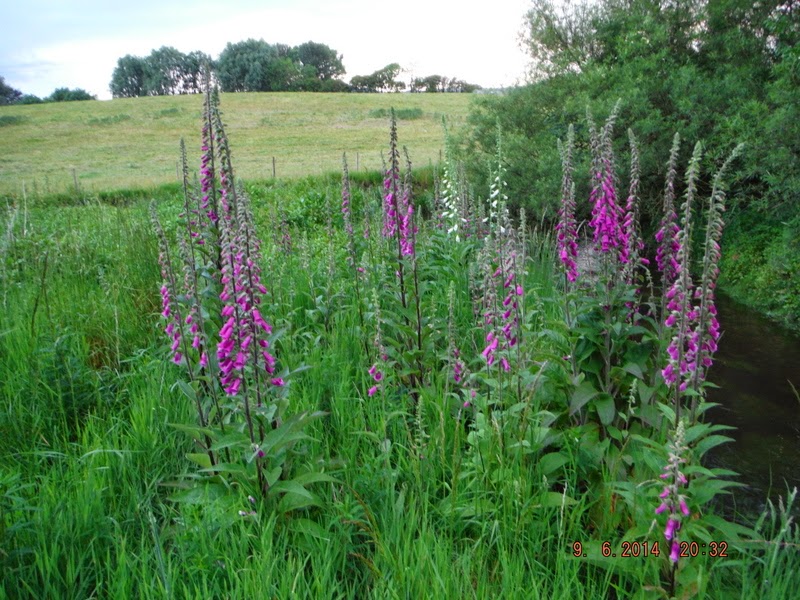 As you can see from the picture below there is very little bank fishing and great care needs to be taken as to where your back cast is going. 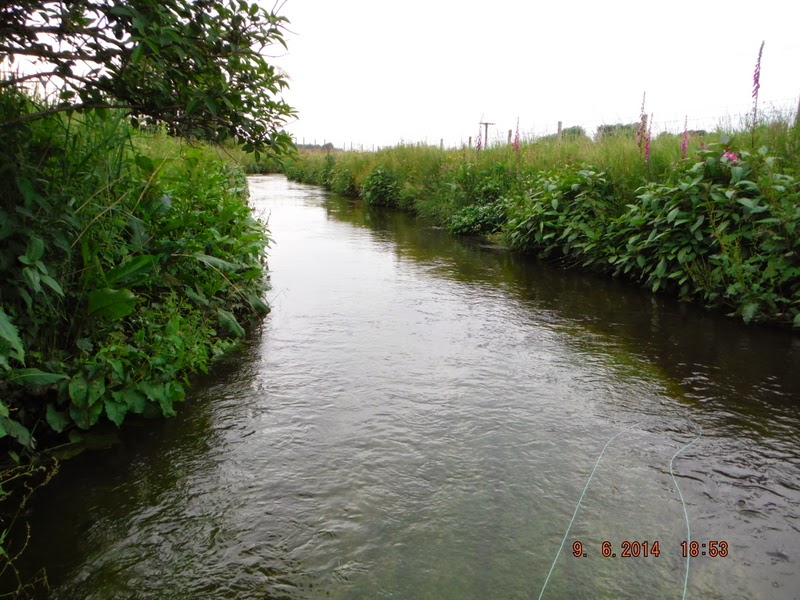 I did manage to start and finish with the same fly, although I did have to replace a tangled tippet.


Posted by Flyfishing the Irwell and other streams at Monday, June 09, 2014