Fly Fishing Film on the Irwell in Salford 17 May 13

Mike Duddy asked me to represent Salford Friendly Anglers fly fishing in Salford so that the Enviroment Agency could film and interview me to help show how the river had improved. Went OK except I did not catch anything.Not surprising as after yesterdays rain the river was running muddy brown.

Olly the Eviroment rep. told me that they had removed the weir at Goshen on the river Roach so after the filming I went for a recce. The weir removal is a great improvement, looks like a proper river now, a clean gravel bed and good access for wading. The river was running near clear, a surprise after seeing the colour of the Irwell in Salford.

So I set up my 8 footer with a pridex and a floating line and into the river I went. Tried a gold head pheasant tail by the footbridge at Gigg. Nothing. Then a couple if fish started to rise, so put on a Greenwells Glory, Ginked it up and bang first fish of the day. But not the last, the best day by far that I have had this year and probably last year as well. Fish into double figures in numbers and all of a good size and fight they certainly did. 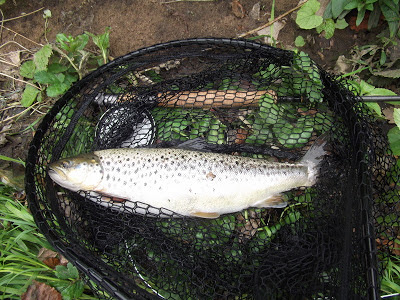 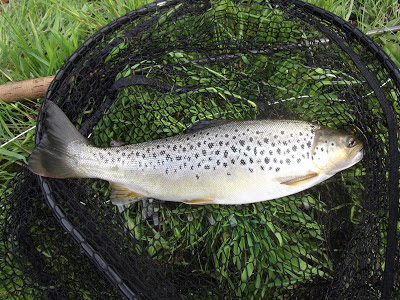 Like the Irwell trout very light in colour, but all were good condition broad shouldered fish and not damaged like some of the Irwell fish that I have caught this year.

I will be fishing the Roach more this year and that's for sure.

The Enviroment Rep told me that the weir at Kearsley on the Irwell is the next to be worked on, not a complete removal, but a break in the middle. Hopefully the improvement to the river above the weir will be as good as the improvement on the Roach. I will let you know when it happens.
Posted by Flyfishing the Irwell and other streams at Friday, May 17, 2013