Not been out lately the weather has been wet, cold and windy. Today I decided to fish no matter what the weather.

The rain that I had been waiting for, to clean the rivers, has done its job. The Irwell was up to normal levels and running pretty clear. So I decided to try Ewood Bridge, good choice as it turned out, though not to begin with.

Started below the bridge with a goldhead pheasant tail nymph, nothing at all at what is usually a good spot for fish, so off I went up river.

Met two chaps photographing a dippers nest trying to catch the young birds fledging, left them at it and carried on up to the motorway bridge.

Fish rising above the weir so changed to a Greenwell's Glory and had three nice fish. Moved on up and carried on catching until I caught the on below. 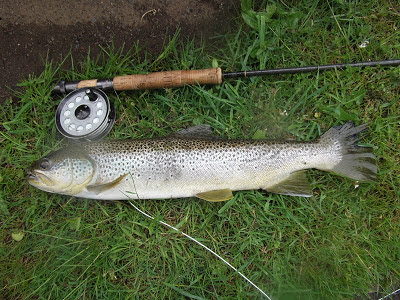 Caught a couple more then moved down below the motorway bridge and caught a few more.

On my way back to the car came upon a "hide" by the river near to a Kingfishers nest. "Twitchers".

(Just had look at the earlier blog I think this fish could be the same as the one I caught before.)

Posted by Flyfishing the Irwell and other streams at Tuesday, May 14, 2013