Monday:   Thought I would have an evening fish for a change.
Went to the river Roach, it was up a bit from the last time, but not much. The rain had done some good though, the brown slimy algae has mostly gone which pleased me no end.
It's been a windy cold day, except for when the sun bothered to shine, which was not often enough for me.

Anyway I dressed accordingly and got in the river, plenty of flies about but not many fish rising for them. Started with a Goldhead Pheasant Nymph, caught a smallish brown, well small for this river, near the car park. Two fish started rising so changed to a Greenwell's, nothing doing. Got out of the river and walked down to the bottom of the beat, what I call the beat anyway.

Started back up, still flies coming down river but no fish rising, waded through four places where I have caught before, nothing moving apart from two black head gulls that were having there fill of flies. Almost back to where I started when I found what looked like six or more fish rising at the head of a pool. Didn't want the Greenwell's changed to a Grey Dun with a flash. Many casts then a take, ten minutes later I netted this one: 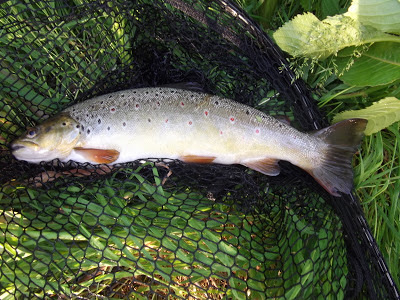 Got him back in the water, of course nothing was rising any more, so I moved back up below the car park for a last try at the risers from earlier. One of them took but I managed to loose him, so I called it a day.


Tuesday:   Spent the morning down where the Croal meets the Irwell to get more pictures before the weir at   Stoneclough gets taken out. The first picture is looking up the Croal from the Irwell. 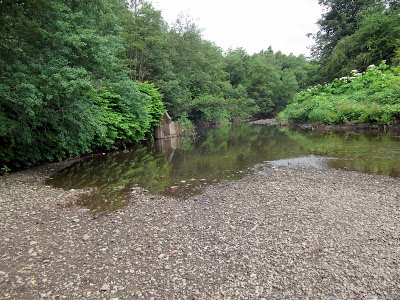 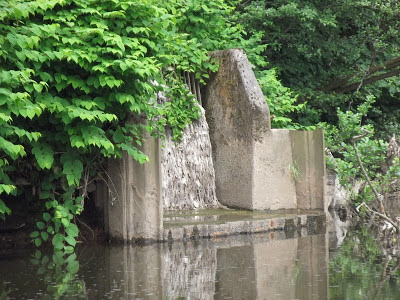 This is what goes into the rivers when the sewers get overloaded, raw sewage. Sent copies of the pictures to Mike Duddy who will be seeing United Utilities (the company who bring our water and take away our waste) next month
.
My afternoon was spent at Ladyshore, caught two browns on Pheasant Tail Nymph, nothing special, but it is better than I usually do down there.

Whilst at both locations I list flora and fauna for the Greater Manchester Record Centre. I then do a report in the evening. Any one can do it just type in RODIS on google and of you go. That's if you live in Greater Manchester of course.

Wednesday:   Fought my way through head high Stinging Nettles, Himalayan Balsam, Brambles and a sticky plant (must find out what it's called)( its Goosegrass. Galium Aparine) that made it very hard work getting to the river Roach at Heap Bridge.
Was it worth it, yes and no, only caught one medium brown, but I do enjoy being in the river. I wasn't looking forward to fighting my way back, so I thought I would wade as far up river as I could, to be nearer the car park. With the river being low I managed to to get all the way to the motorway slip road flyover where the car was parked. Much easier and no more Nettle stings.

Thursday:   Raining other things to do no fishing.

Friday:   Lots of rain today, went to the valley in Bolton to check Eagley Brook. was running nice and high but very dirty.  Tried  up stream and down stream nymph, just ended up with a dirty nymph. Rain came on hard, yes off home, called it a day.

Saturday:   Went to Bury Ground at lunch time. River Irwell was coloured and up 3 or 4 inches. Still fish rising and lots of flies about
.Crossed below the weir and fished down stream Nymph, Goldhead Pheasant Tail.
Had five browns in a fast riffle, best about ten inches, lots of snatches and also lost more than I hooked.
This one was is darker than the light coloured ones I usually catch in the Irwell. 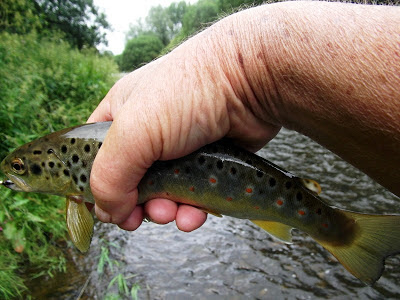 Had one small one in the calmer water then nothing.
Moved back up to the top of the riffle, changed and lengthened my tippet and fished a Goldhead Copper John caught one more fish and missed a few more.

Posted by Flyfishing the Irwell and other streams at Monday, June 24, 2013