Out and About Week Ending 7 July 13

I have been recording flora and fauna for the Greater Manchester Local Record Centre for some time now. This week I decided to give it a blitz and and record more of what I saw, with the help of a couple of books that that I bought on Flowers and on Trees. I have been recording just what I caught and some of the things that  I saw, without trying to identify things that I did not know the name of.

Anyone who lives in Greater Manchester, or comes into it, can take part. Just type RODIS in google and sign up, you don't have to be an expert in anything, just record what you see. It's a bit fiddly but there's plenty of help available. Give it a go.  I took along my fishing tackle of course.

Monday:   Was Kick Sample day at Ewood Bridge, better results than last month, which is to be expected, lots more insects and a few baby bullheads. Had a hours fishing two browns and missed one or two. River still very low but looking a bit cleaner than it was.

Wednesday:   Irwell at Summerseat, it must have rained on Tuesday as the river was up, though still fairly clear. Nothing rising caught one on dry and two with nymph, not much fun. Recorded lots of flora and fauna.

Thursday:   Started on the bottom stretch of Bradshaw Fly beat, lot of colour, never found out why. Had three, one a nice ten inch fish,  then moved to the upper stretch. Caught another two small ones, all on dry.

Friday:   Started at Sion Road Radcliffe, as soon as I got down to the river one rose above the foot bridge. Second cast he took my fly, nice fish about 13 inches, good jumper. 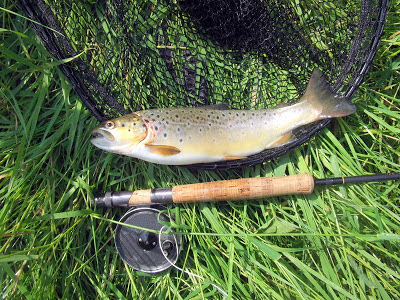 Had one other on nymph further down stream and that was it. The river was down again, I waded across the river where I caught the second one, never even thought about doing that before. Very strange weather this summer, though it was hot and sunny today.
Next I went to Springwater Park one nice brown on dry again. Its so low that I could wade across the confluence of the Roch and Irwell without it going much over my knees. Still a few fish rising but with the shallow water any disturbance and they are gone.

Saturday:   Started at Bury Ground, very hot, still put chest waders on, bad decision. The river was low and nasty, had one small brown on nymph, nothing rising so went to Gigg.

The Roch looked good, plenty of water and nice and clear, much better than the Irwell.
Couple of fish rising in the riffles didn't want what I put to them.
Moved up further to a spot I've had good fish from. Nothing rising but still put a dry to the top of the pool.

Very good fish took my fly then most of my line, he went off down stream until I had just a couple of yards of line left, no backing on my small reel. I started wading down to him when he snagged on something in the shallows and was gone, with my fly and a couple of yards of my tippet. The snag was a the rusty remains of a forty five gallon drum, that's fishing in dirty places for you.

Got out of the water and walked down to where the weir used to be and started up stream looking for rising fish. There weren't many, got a take at last, another good fish by the feel of it, yes I didn't get him to net.
It went off like a train, two jumps and then gone, at least I still had my fly

Some days its best to except it and go home.Fished back up to the car and then did just that.


Posted by Flyfishing the Irwell and other streams at Friday, July 05, 2013