Tuesday:   !6 July. After last weeks poor fishing and low water with no sign of rain, I decided to fish at Seven Acres Country Park. Its close to home so I thought if its crap I don't have far to go. 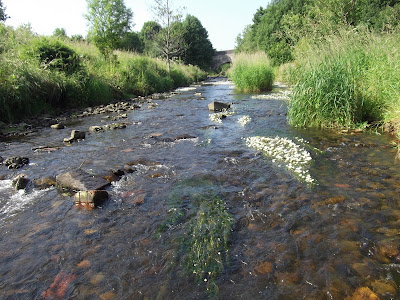 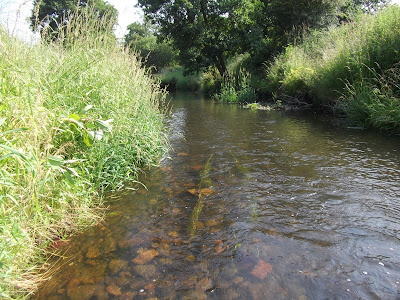 Decided to us my 7' three piece split cane with a four weight floating line on my Young's 3 " Beaudex, the rod has a very soft action and is good for putting a fly down softly on shallow water. 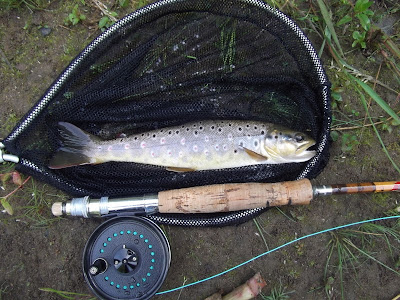 Had a few nearly as good as this one plus loads of smaller ones, most of which where caught in less than six inches of water. I only lost two flies which must be a record for me, the pictures show one of the few places with out to many trees on Seven Acres, but the banks are bad enough at catching flies.

I am pleased with the fish that I caught today, but, after seeing the one on the Salford Friendly site that was caught on the Irwell.(http://salfordfriendlyanglers.blogspot.co.uk/2013/07/an-awesome-trout.html) Perhaps I should get back to the big river, mind you I am not to sure I could land something that big on the tackle that I fish with.

Wednesday:   After yesterday decided to stay local and fished Eagley Brook at Dunscar. Same rig as yesterday and same result. Nothing as big as yesterday, best a 10", but lots of fish again. It was very hot so a took a dip, luckily no damage to me or my kit, and it did cool me down. Not too much in my waders so I just carried on fishing. 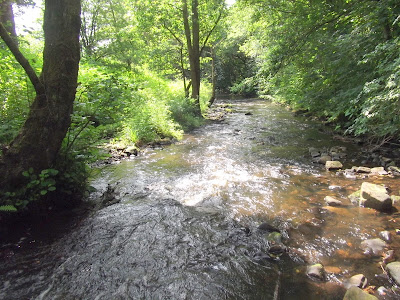 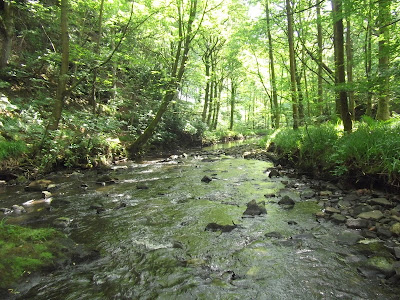 Friday:   Had a good days fishing today plenty of fish and one that took me very much by surprise. 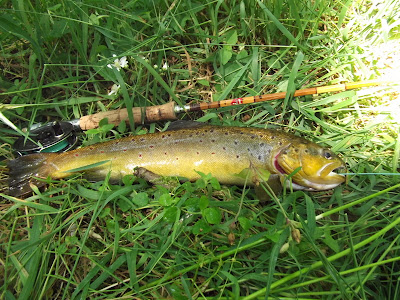 This 19 Inch monster came out of a very small stream, no I am not saying where. Caught with the same tackle and fly as earlier this week.

Saturday:   Back to the Irwell at Bury Ground, should have watched the golf, one small fish from a river that needs rain. I least the weather was a lot cooler.

Sunday:   Eagley Brook in the lower valley, can't understand why it looks in poor condition, further up where I fished on Wednesday it looked fine. Two small trout then home to watch the golf.
Posted by Flyfishing the Irwell and other streams at Tuesday, July 16, 2013