Monday:   Had a couple of hours in the evening on Bradshaw Fly Fishers beat. not much movement, no fish.
Pulled a lot of Balsam out in and around the brook, it's a loosing battle, but I keep pulling. At least we don't have the Giant Hogweed, YET.

Tuesday:   I went to see the work being done by the Environment Agency on the River Medlock in Clayton Vale in Manchester. (see my blog Restoration Revolution). The River looked very poorly we really do need some rain for all the rivers and brooks.

Wednesday:   Fished the River Irwell at Lower Broughton at the Boddington slipway and further up by Peel Park. Caught no fish and saw no sign of them. At Boddington slipway the river looks dead and yet at Peel Park about one mile up stream the river has a long stranded weed (Ranunclulus Batrachium maybe?)   and looks quite health.
Still need that rain and, as I write we have been having some, looked quite promising for a while, but it has stopped again. Never mind the forecast for tonight and tomorrow is for lots more, lets hope its so.

Thursday:  Well the rain came but not enough, still plenty of black clouds about so we may get some more tonight.
Fished Eagley Brook at Eagley Mills. First time down there this year, little bit of colour in the water, plenty of fish rising.
Started with dry fly one small brown then nothing. Fished czech nymph and had 2 small browns and then a two pound CHUB. What a surprise, I did know there are chub in the brook, but did not think I would catch on nymph, but then why not.

Moved to Bradshaw Brook at Firwood Fold. First timer again, had two small browns on a Pheasant tail nymph and then home.

Friday:   More rain today ,not enough to do much good, we still need more.

Started the day at Ewood Bridge on the Irwell, the river was as low as I can remember ever seeing it. Nothing moving until I was passed the motorway bridge and then not much.
Tried nymph and a couple of dries to no avail. Lots of rubbish coming down the river so I could not see what they were taking. Also had to keep sheltering as the showers were quite unpleasant at times
.
Moved down river to Nuttall Park in Ramsbottom nothing rising and did not get a touch again.

Not a good week for fish, never mind still got Saturday and Sunday.
Its Raining as I type so there is hope for tomorrow if it continues.

These photos I took today just to show some of the problems we have on the Irwell. Surprisingly I usually catch some good fish just below this outlet. 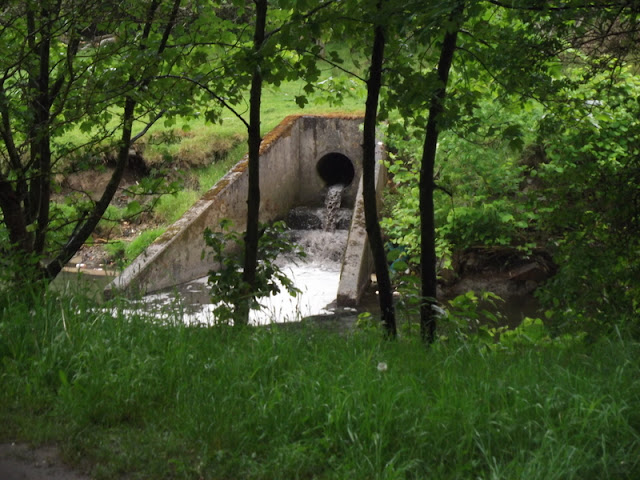 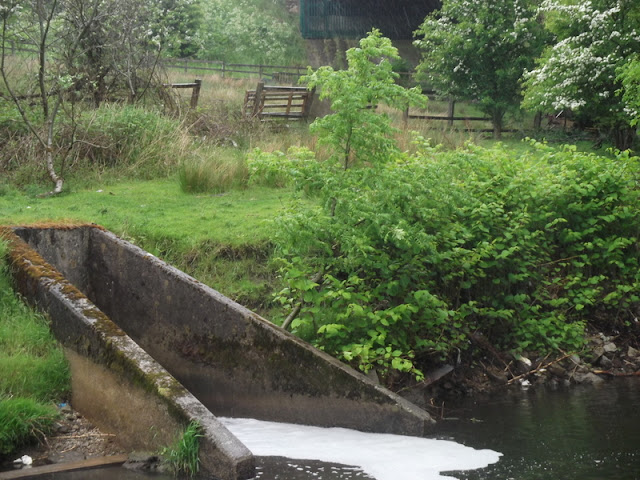 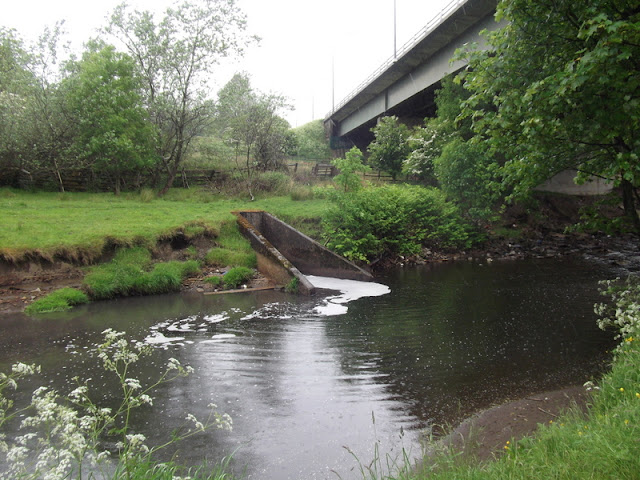 The Bridge is the Motorway.

Saturday:   Went to the Irwell at Bury Ground. Bury Ground used to be an area of mills, factories, a slaughter house(Blacks) and lodges(mill ponds), now it is mostly grass. But for how long, the new Police Headquarters and a office building went up a couple of years ago and last year a new Fire Station. What next?
There are three weirs at the moment, two of which could be removed in the near future. The bottom weir which is just above Bury Bridge, which carries the roads to Bolton and Ramsbottom, and a few other places. 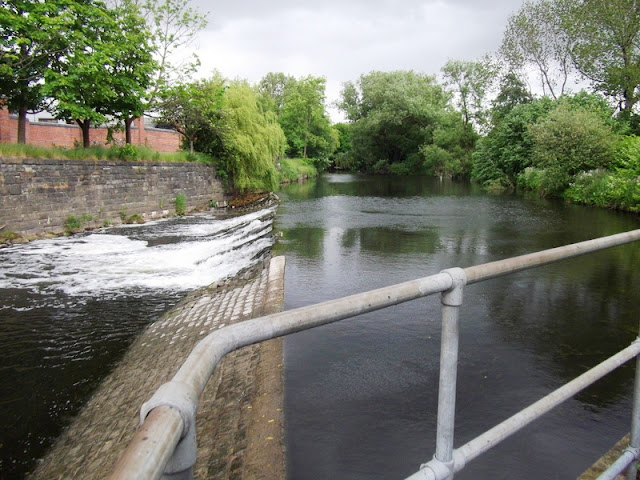 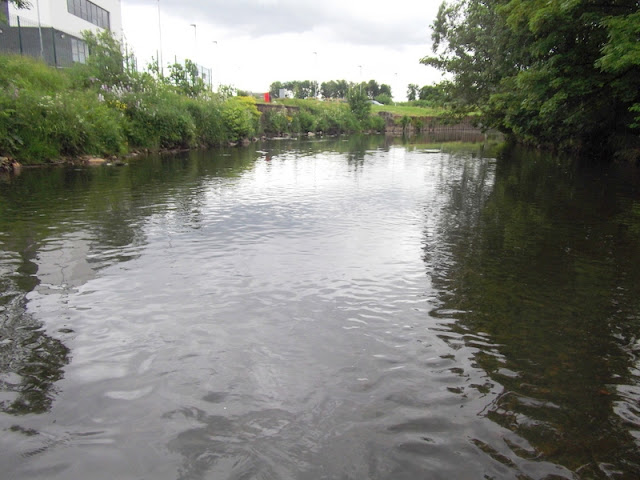 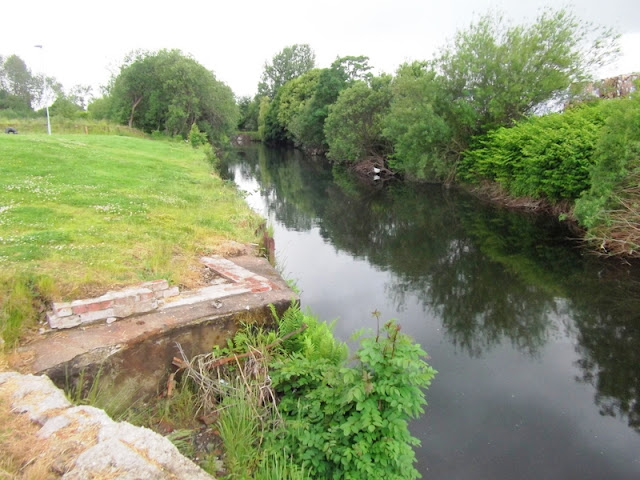 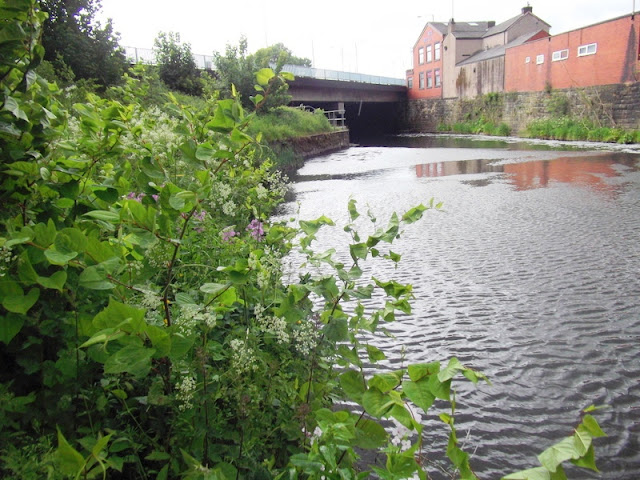 Looks pretty OK in the photos, but its not as good as it looks.

The top weir is in a bit of a mess and needs to be removed pretty soon as the next flood could do the job. 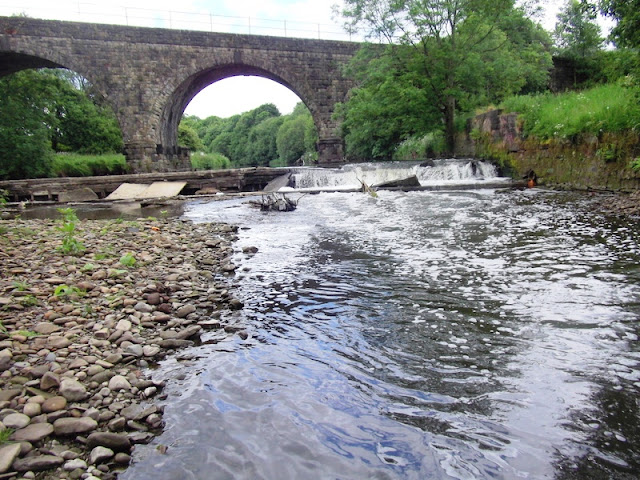 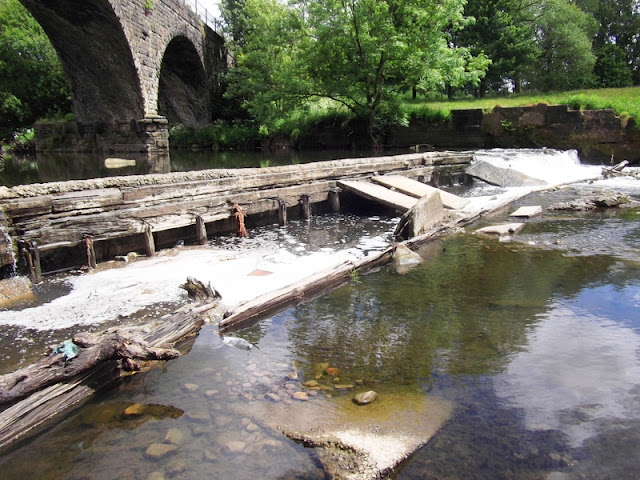 The bridge is an old railway line that used to go Greenmount and I am not sure were else. Its a walk way now.
When the top weir goes it will, in my opinion, be a great improvement and should make the fishing a lot better.
Removing the bottom weir could be good but I am not that sure, will just have to wait and see.

The Middle weir is much larger than the others and has a Environment  Agency measuring station above it, so I don't see that one being removed, pity. 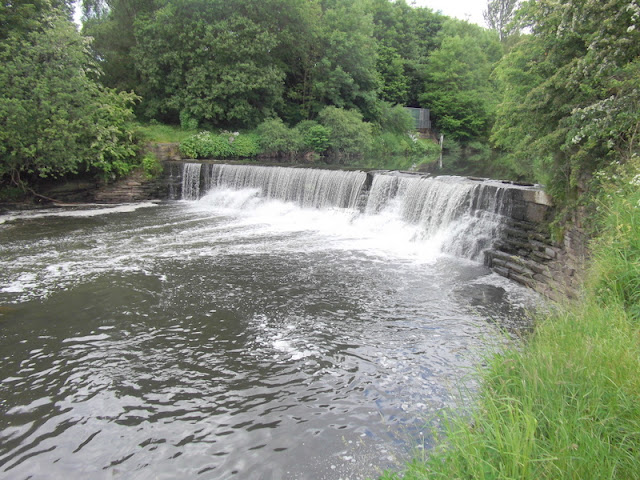 Any way I caught three trout, one below the top weir and two down by pictures two and three of the bottom weir, all on dry fly, Greenwells again, eight foot carbon Young's Pridex .

Sunday:   Started at Springwater Park were the Irwell and Roach meet. Did not look very good to me, the Roach was running brown and the Irwell was not? 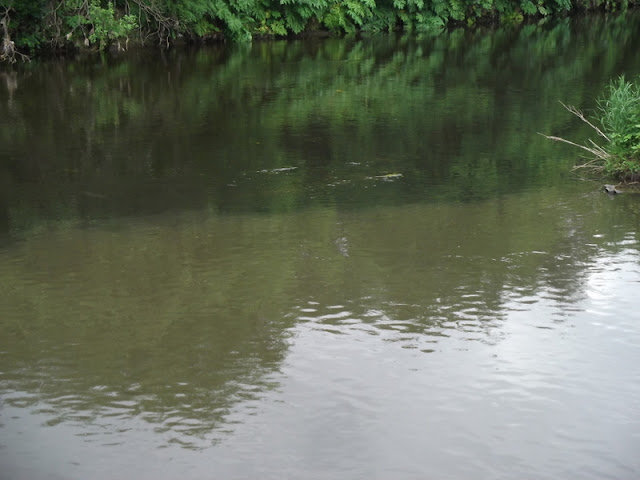 The photo, is near ground, Roach far Irwell, even without the mud they are always of a different colour.
Had a walk about and a few casts with a nymph then off  to Bury Ground again.

Caught a small brown on dry fly for a family who thought the Irwell had no fish, cast at a few that were rising, to what I know not, stood in the river to cool my feet for a bit. Took a photo of a family of swams that had just walked a couple of hundred yards from the one remaining mill pond to the river. 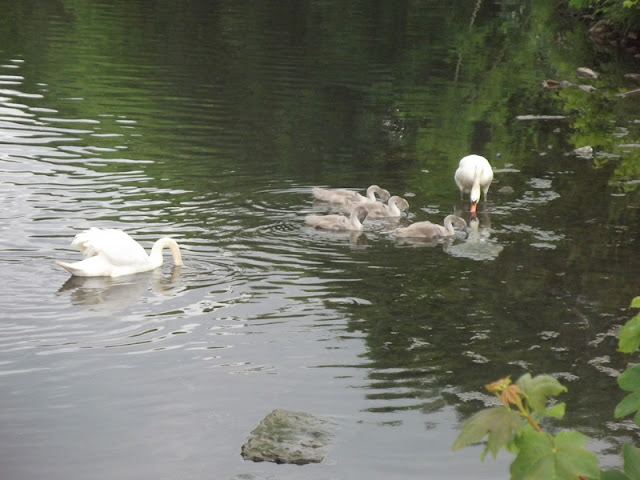 Wondered what the police were doing, must have seen the swans across the road.
Well that's it for this week
Posted by Flyfishing the Irwell and other streams at Wednesday, June 12, 2013