Took the bus to Clifton Green and with the aid of Ordnance Survey and, a passing runner, found my way under the Manchester/Bolton rail line and down to the river. This put me on the left bank, looking up river, were as Saturdays walk in the rain I had crossed the river at the canal aqueduct and finished the walk on the right side.
Started of down river to the aqueduct, which was not to far away, wanted to get some better photos. 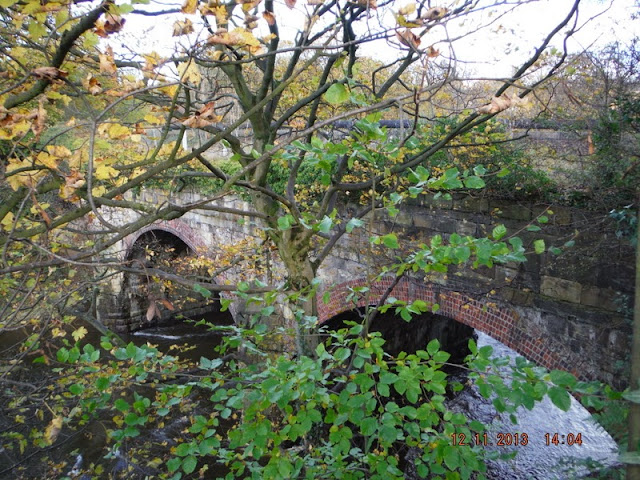 As you can see, I failed, to many trees, still there it is. 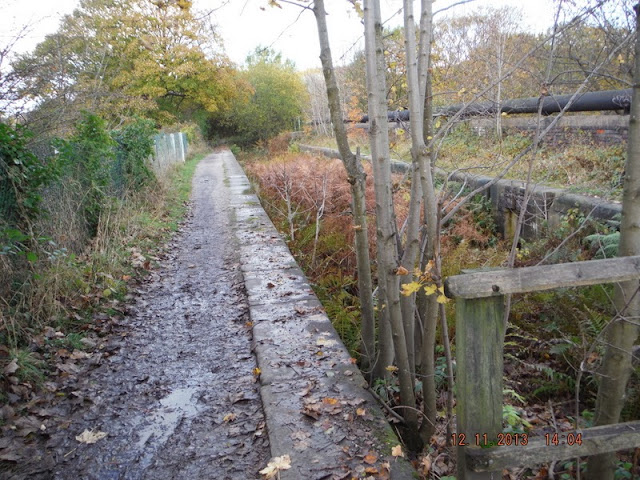 The river is under what you see, no water in the canal so is it still an aqueduct or just a bridge with a channel. 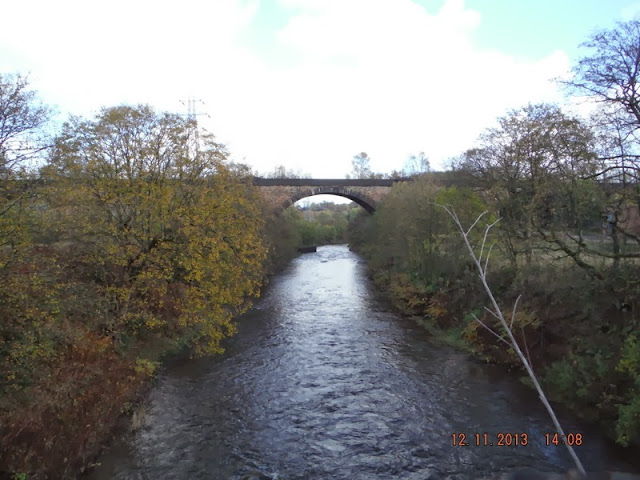 Looking down river from the canal to the disused rail link to Radcliffe.

Took the photos and went back up river on the left bank.. The river runs in a quite deep cutting up to the end of Clifton Country Park. I don't think it could break its banks anywhere around here, which also means there is little chance of me to doing any fishing. I could get down the bank in places, not sure if I could get back up though.. 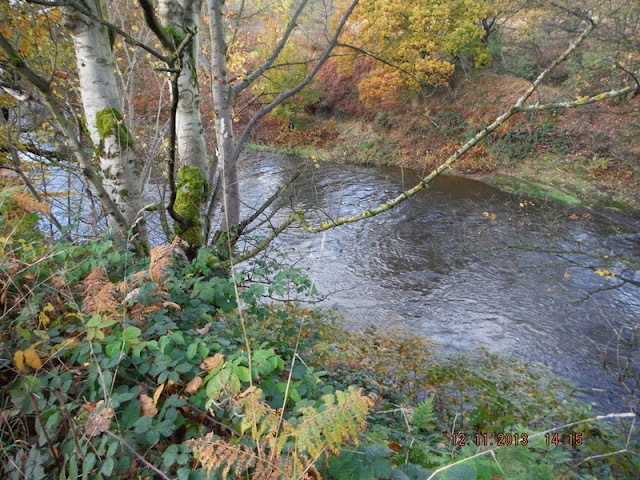 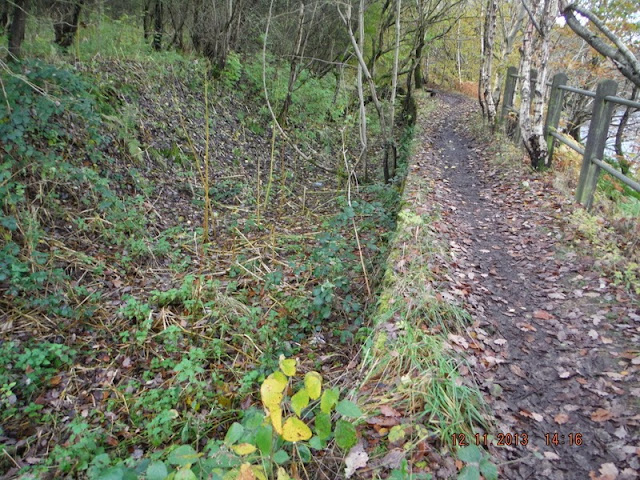 To the left side of the path there is what appears to be a water course, could it be that part of the canal came up this side of the river? 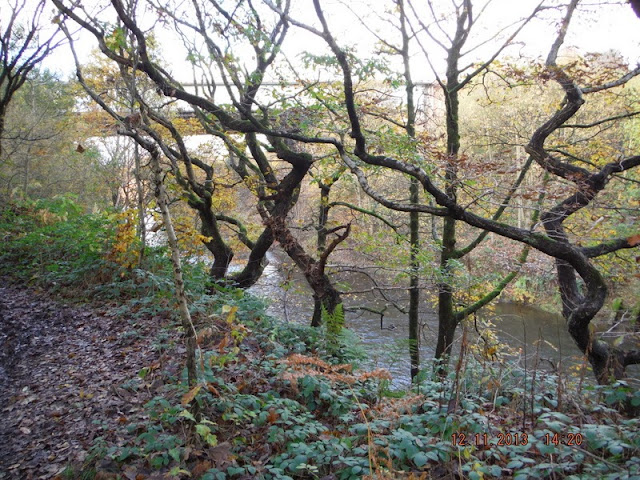 Getting near to the Motorway Bridge. 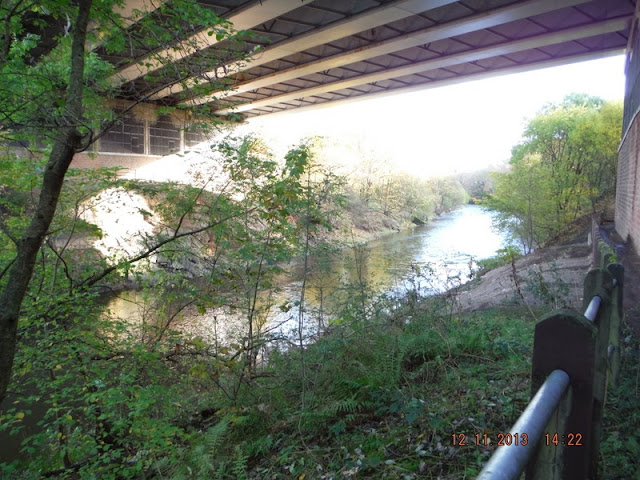 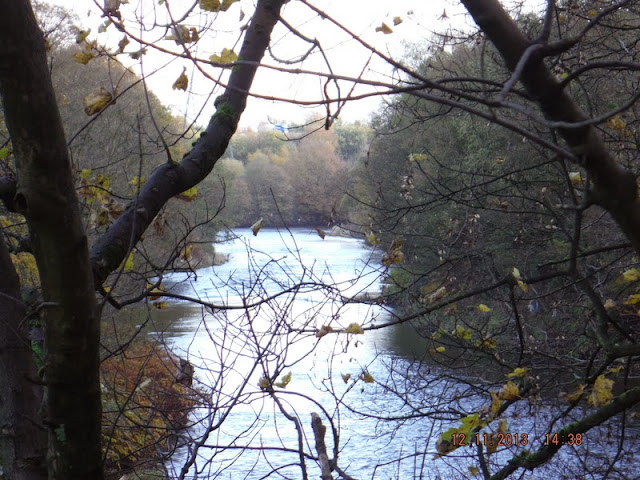 Here the river looks as good as any river can, in the photo. But just up river. 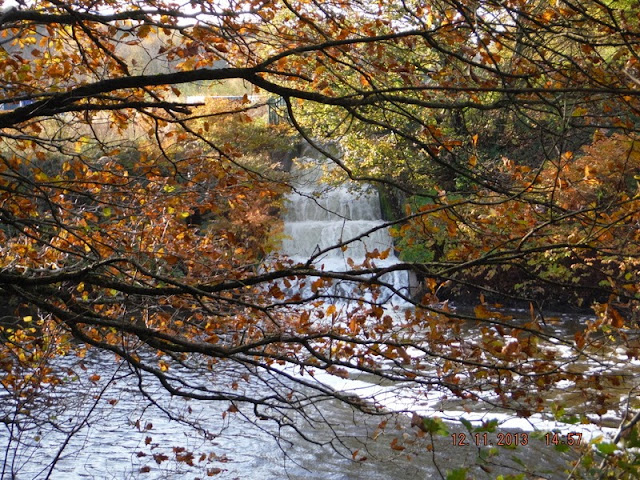 Effluent from the new Ringley Fold Sewage Works, I don't think it ever stops flowing, 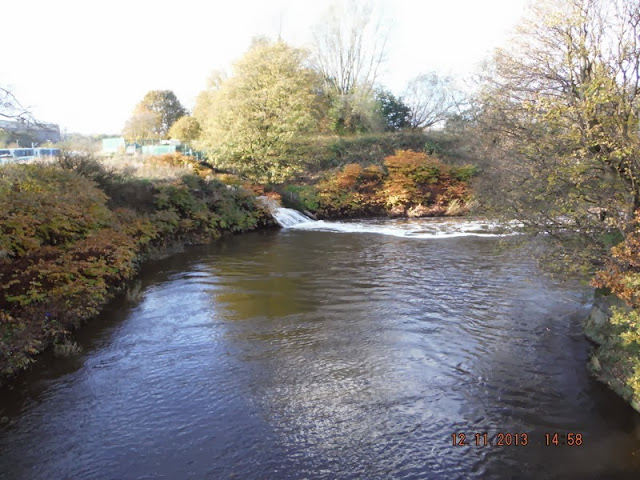 Just to the left of this photo. 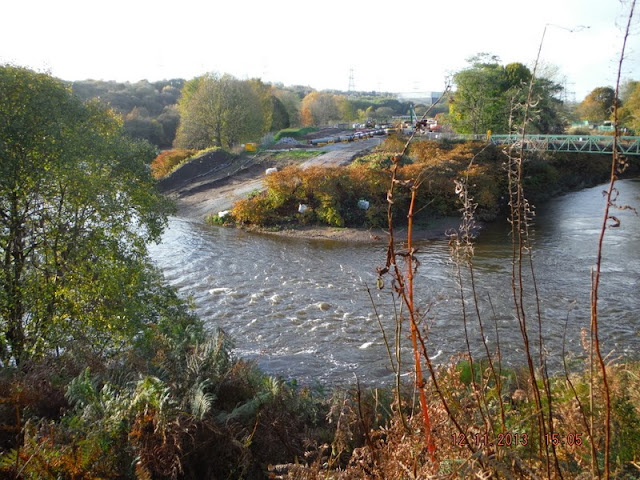 Is the site of the under river sewer pipe that cracked and pump raw sewage into the river.
In an earlier blog I reported about the Salford Friendly Anglers fishing match that was ruined when raw sewage came down river and I blamed United Utilities for releasing the sewage.
Well this was the source of the problem sorry UU. 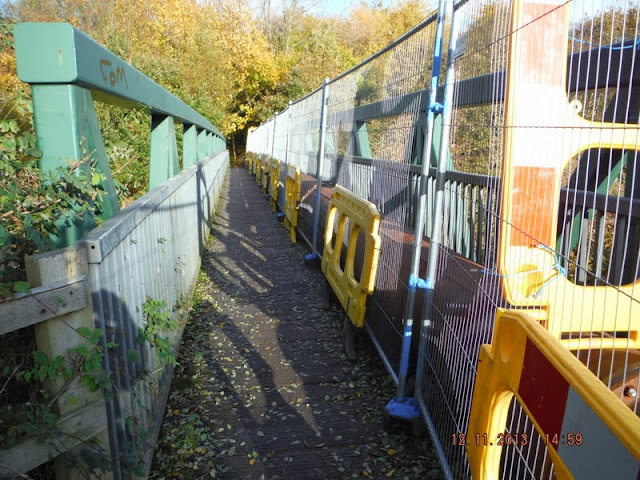 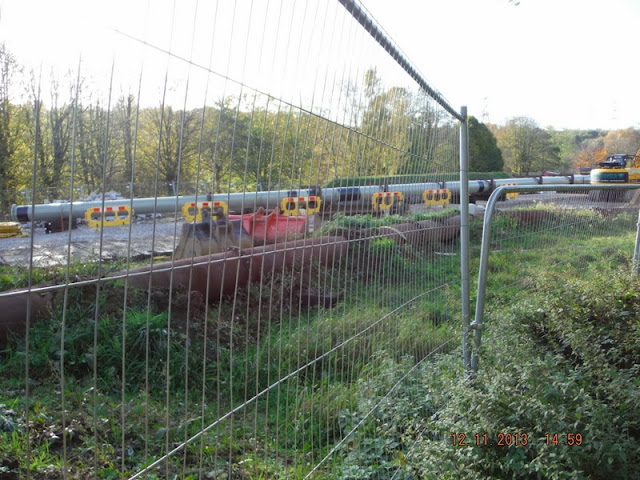 Very big job to fix, as they can not stop the flow of sewage , they had lay a temporary pipe across the footbridge so that they can fix the one under the river. 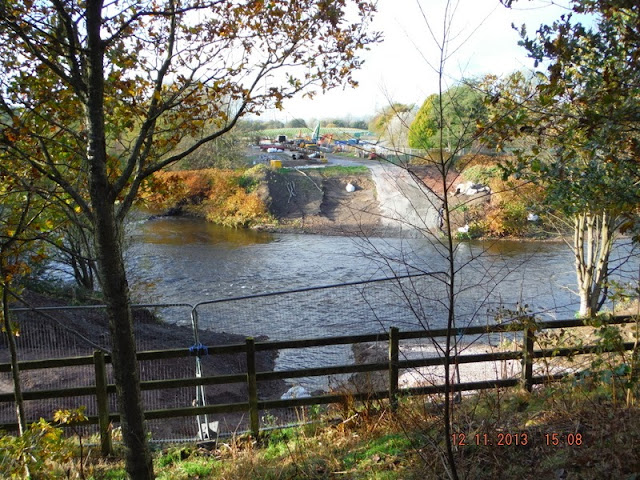 Enough of sewage on up the river. 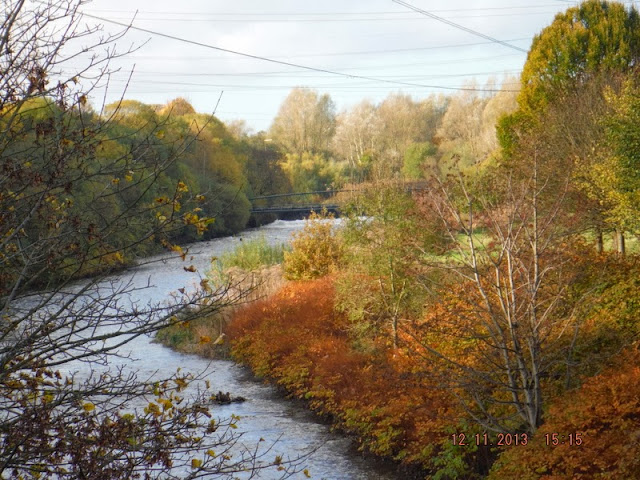 Ringley wier in the distance the other bank is low and I do fish over there at times. 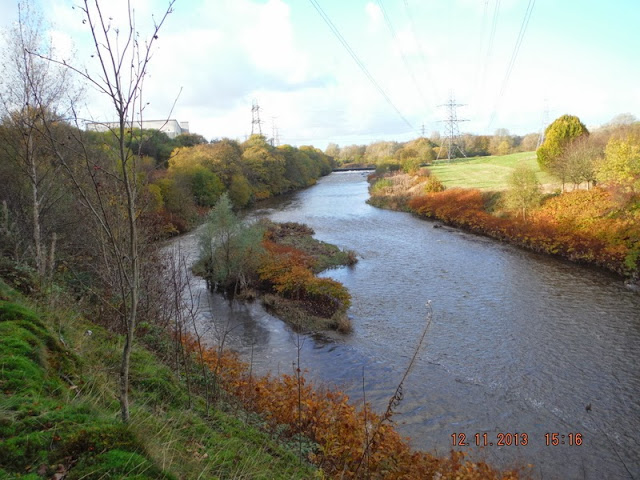 In the summer I wade across from the other bank to fish by the island.
This bank gets very high I will soon have to go behind the power station on the left. 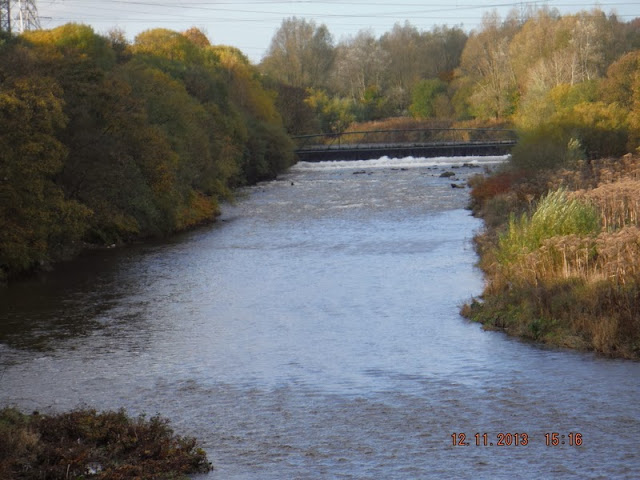 Ringley weir with another pipe running in front of it. 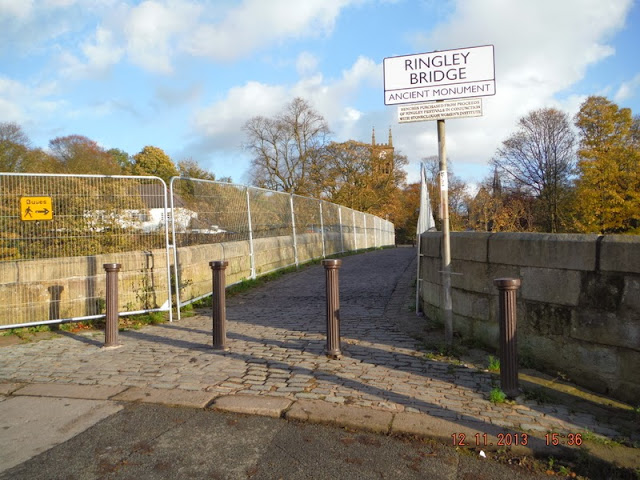 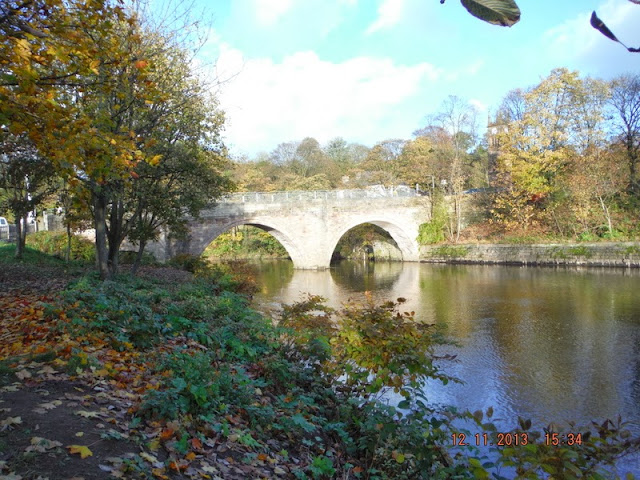 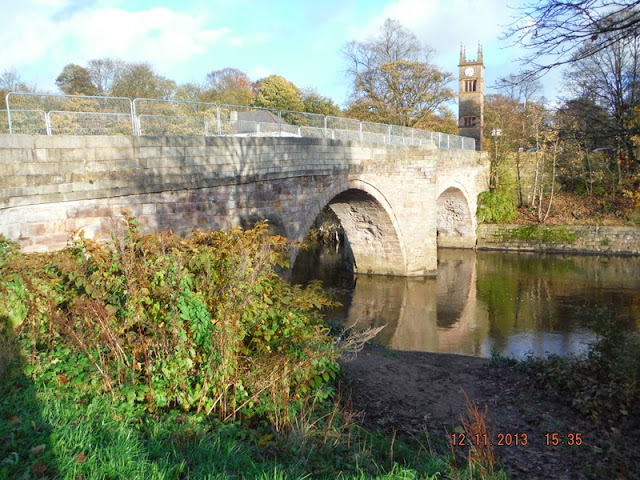 The bridge has been getting lots of use due to the road bridge being closed for 6 months for repairs, I am told the repairs will be done by the end of the month(November). 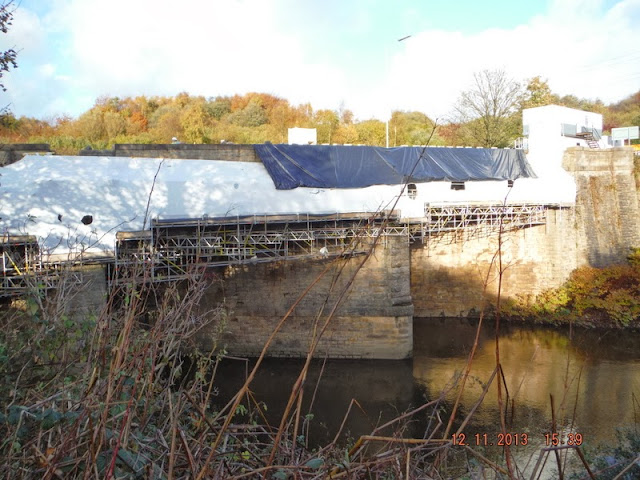 From here I walked along the road to The Grapes just after which you need to go off the road past a car repair shop to find the path to Moses Gate Country Park.
Which I didn't do. The path to Moses Gate is not an easy one, very hilly, and you don't see much of the Irwell, that's my excuse any way.
It brings you out near to where the river Croal joins the Irwell and if the footbridge has been replaced, they are working on it, you can get onto Nob End and follow the Irwell up to Radcliffe. Or for easier walking follow the Bury Canal.
I got the bus back to Bolton instead.

Posted by Flyfishing the Irwell and other streams at Wednesday, November 13, 2013