Tuesday:   Went to fish Eagley Brook at Eagley Mills, someone had beat me to it. So I went to the Valley and had a try there.

The brook was looking a bit sad and nothing was rising, but I still tried dry fly going upstream to the weir. Caught two fish on the way up and one at the bottom of the weir, smallest was nine inches, quite pleased with myself. Had one on nymph on the way down and missed one or two.
As I said the brook looked sad and there was still nothing on the rise, so I went to see if my new camera had arrived at PC World.
I have ordered a waterproof one , after my experience on Sunday, but it had not arrived. So went home for a late lunch.
Just got an email to say the camera has arrived so I am off to get it.

Wednesday:   Went to fish the Irwell at Sion Street in Radcliffe, seems a while since I have been there. The river was quite low and dropping. Set up a 10 foot rod with a Shakespeare Speedex and fished Goldhead Copper John on a floating line. Caught three good fish, one didn't want to be photographed, even with my new camera, and jumped out of my net as soon as I had unhooked him. 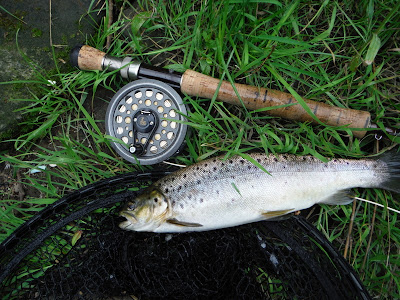 These two seemed to have a bit more colour than my usual Irwell fish. 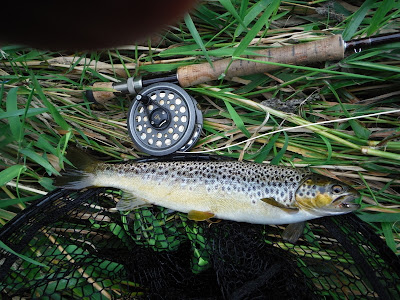 Its not the prettiest spot that I fish. Looks better in the photos than in real life. 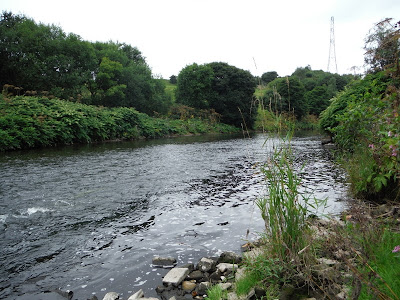 This is looking down stream about 100 yards below the foot bridge. 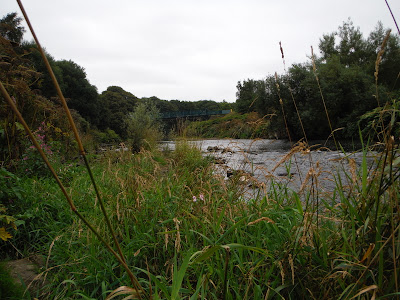 Looking up towards the foot bridge. 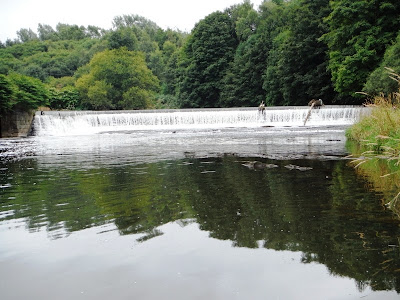 The weir is the top end of the area that I fish.

Then went to Springwater Park, another spot that needed a visit.
Had a long chat to a chap called Mickey who was teaching his grand son to fly fishing, he told me he had joined Salford Friendly Anglers, I recommend any one reading this to join, it don't cost anything and its aims are all good.  http://www.salfordfriendlyanglers.co.uk/ Go on have look you will be glad you did.

Fished the same tackle as Sion and had one fish, not the biggest fish but I put it on so that Micky can see it. 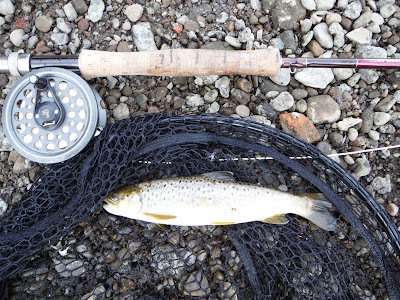 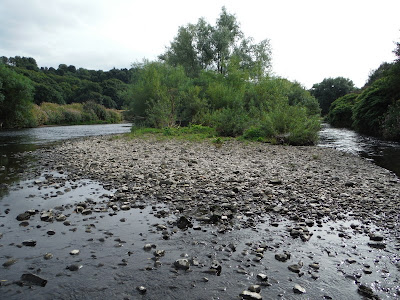 The Island in the river just below where the Roch joins. 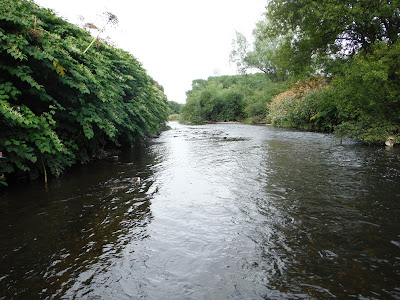 View up one side of the island.

As with Sion St there were no fish rising so didn't stay too long.

Friday:   Yes I know I said last week I would give Ladyshore a miss, but it really does look good, so off I went again today. Have a look at these pictures see what you think. 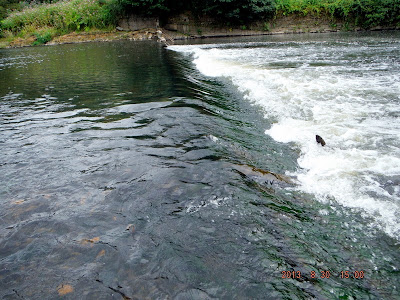 This is the weir that broke in last years flood 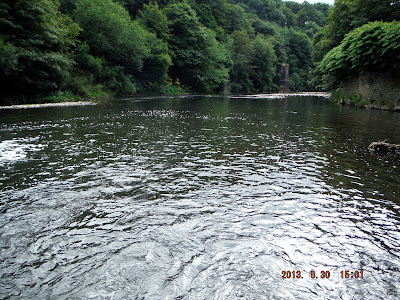 Looking down river from the weir 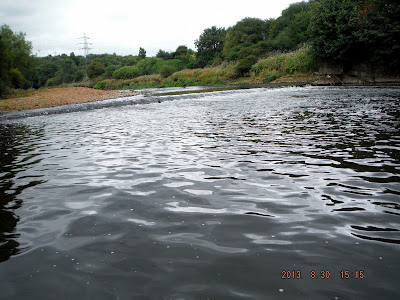 Looking back up at the weir 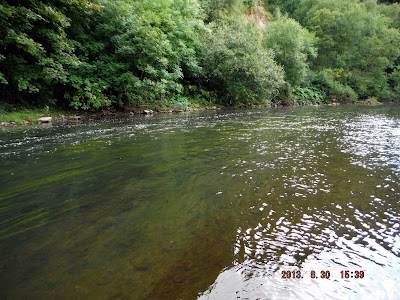 200 yards down from the weir where I caught the fish 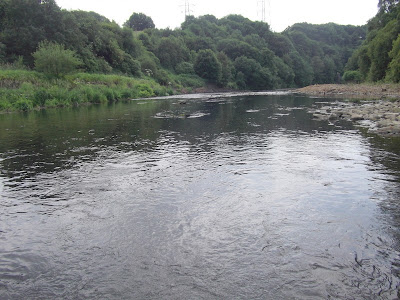 Above the weir looking down river 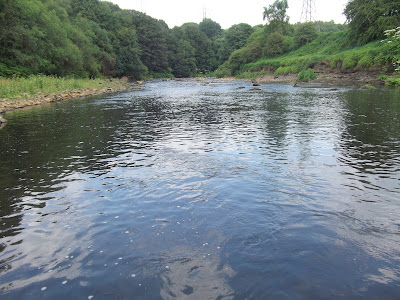 Same place as above but looking up river

Well, tell me does that look like a place to catch fish, I think it does. You may have noticed I actually caught one today. 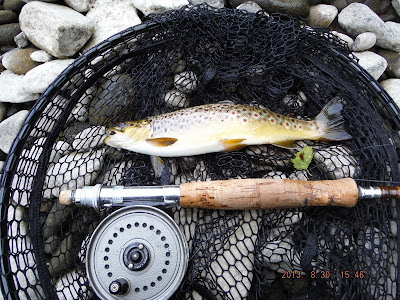 Not a monster but the first from Ladyshore for quite some time caught on a goldhead copper john, 8 foot cane rod,sinking line on a very old Young's Beaudex reel. I thought I had lost him when he went into weed, gave him some slack and he worked his way free.

Was reading an article  in the Online Fly Fishing Magazine about fishing streamers, which I have never tried, it sounded good so I ordered some Wooly Buggers and Muddlers from Troutflies will have a try out next time I fish the Irwell.

Sunday:   Went to Ewood Bridge for my monthly kick sample, figures much the same as last month. The river is very low and the alga is back, very cold with no sign of fish moving. Where do they go when the river is low, or is it that they see us well before we see them.

Tried a Wooly Bugger in the deeper pools, not that there were many of them, didn't get a touch. Tried a copper john the same, no action. Packed in and went home for a warm.

Couple of shots of the river about a mile up from Ewood Bridge, as you can see the banks are unstable and change every time there is any decent rain. This winter will produce lots of changes, hopefully some for the better. 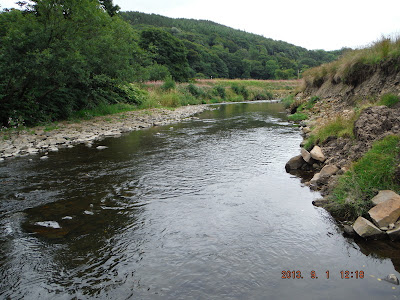 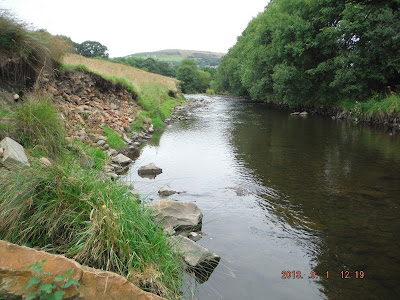 Posted by Flyfishing the Irwell and other streams at Tuesday, August 27, 2013