Monday:  No fishing, went to my first Bradshaw Fly Fishers meeting. One of the members had caught a trout that I would not have believed had he not got a photo to prove it 4 Pounds a think he said, "oh my memory." But what a fish for such a small brook.

Tuesday:   Went to Stoneclough on the Irwell, hadn't fished there before, turned out that I hadn't missed much . I might try again when we have a bit more water. I waded up to the weir, just for a look. 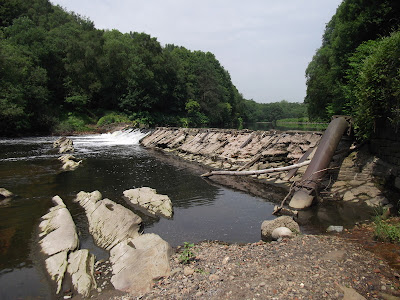 That evening I went to Salford Friendly Anglers monthly meeting  in Irlam. Very good turn out. Mike Duddy told me that the weir is due to be removed on 10 July. I was surprised as I thought it was the one further down stream that was to go.
Mind you its not surprising really as it is in very poor shape. I don't know the area above the weir that well but I do know that the River Croal joins the Irwell not that far above the weir, so the removal will change part of the Croal as well as the Irwell. I will try to get some more photos before and after it is taken out.
I hope the removal brings the improvement to fishing that other removals have done.

Any way after Stoneclough I had a hour at Gigg, nearly went through every type of my dry flies before I got a take, well worth the trouble though. Grey Dun. Very nice fifteen inch Brown who did not want to visit my net, I thanked him and slipped him back in and called it a day.

Wednesday: Had to cut all my grass so decided I would fish local, in the afternoon, for a change.
Went to Eagley Brook in the lower valley, quite a few fish rising but only in very shallow flat water, making it almost impossible to get anywhere near them. So I fished dry fly up into the riffles. Had three small browns and lost as many.
Had not fished Seven Acres on Bradshaw Brook for quite a while so went for a look. Had two nice browns and one small one above the  road bridge, again in the riffles, same method. Above the bridge is not very nice at the moment, four mattresses a micro wave oven and a large scooter, not motorised, have been dump in the brook.
Moved down stream, caught one small fish, the stream looks very  healthy.  Water crowsfoot in abundence and in flower, makes it harder to fish but it has got to be good for the fish and.the brook.


Thursday:   Went to fish the River Croal at Moses Gate Farnworth. Had two small browns and a lot of hard walking.
I wanted to get down to 'Nob End' (honest it is really called that) were the Croal meets the Irwell and get the photos I mentioned on Tuesday. When I got there I could not get down to the river, the bank was too steep for an old man like me, best I could get was this 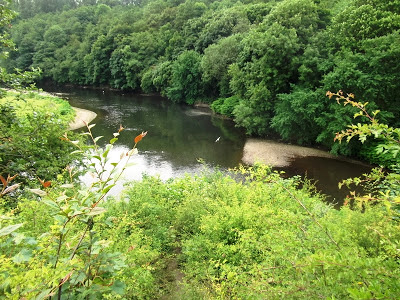 The Irwell going left and the Croal coming in from the right, yes OK not very good I know.

Every river and brook around here has weirs some quite small but not all, this one is about a mile up from the picture above and there is another one about a mile further up again. 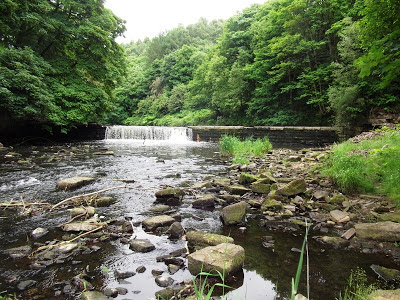 Not sure if I will be fishing tomorrow as I have a delivery coming, if it's in the morning I will get out somewhere.

Friday:   Delivery came in the afternoon, so still had time for two hours at the Bradshaw fly top beat.
Three browns on a Adams dry, 6' 6" rod, one was a nice fish the others were quite small.

I seem to be loosing more than I net, part striking to early as you can see them coming up and also they are out of the water a lot with it being so shallow.

Tomorrow I am thinking of River Douglas just off the A6, if the weather ain't to bad, forecast is rain, which we badly need,

Saturday:   Yes it was the River Douglas. Weather, warm cold rain sunshine windy. sometimes all at once.
Went down for a look first, looked ok so geared up for wading. Started up stream from foot bridge, dry fly had three browns best below. 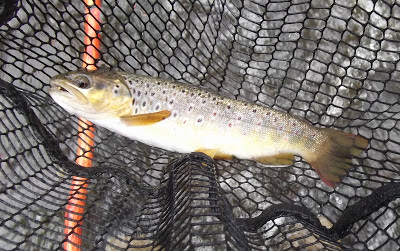 Changed to Goldhead Pheasant Tail Nymph and started down stream caught lots of nice condition browns, in fact I lost count of how many, but it was lots. Couple of the better ones, the best was 12 inches not massive but its only a small river up the top where I was fishing. 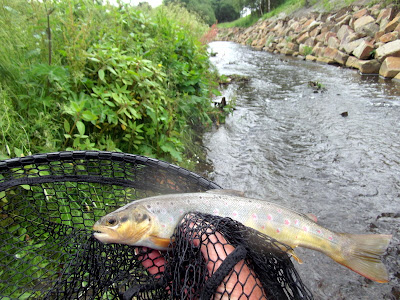 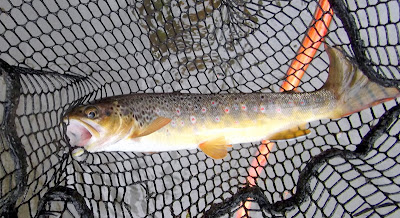 I hit what I thought was going to be the daddy trout of the river, until it came close and I saw this. 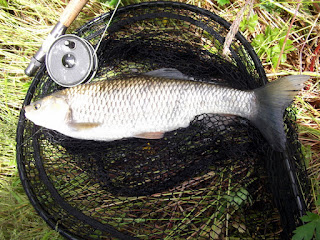 I did not expect to be catching Chub, especially on a nymph, but was well pleased to see it. Kept in the fast current and head down fought more like a brown than a Chub.

Not an easy river to fish fly unless you get into the water the banks are quite high and the vegetation very overgrown. 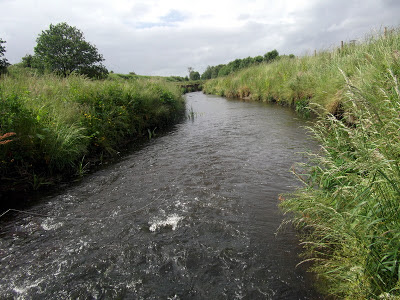 This is typical of the area that I fished, had to be careful as there are some deep bits and also some mud. Very little rubbish which was pleasing and unusual for rivers around here.

As I was finishing met another chap who was trotting from the bank, he said he was doing as well as I was, and had fifteen trout, not as brain dead as me, he could keep count.

The forecast for tonight and tomorrow is lots of rain so I will wait until the morning to decide where or whether  I fish, you will be the first to know.
Mike Duddy of Salford Friendly told me ages ago that the Douglas was full of fish, just wish I had got there a bit sooner, thanks Mike.

Sunday:   Well the rain that I have being asking for arrived during the night, and it is still here now. When the rain sets-in in Bolton it RAINS. Admin and reading this morning see what it is like this afternoon, ever hopeful.
Stopped raining so went to see what effect it had had on Bradshaw Brook, not much. A few fish rising could not see to what.
Went to Eagley Brook at Eagley Mills, was running a little higher and with some colour. Had a few goes with a nymph,caught one very small brown. Walked down to another chap (Dave Reay) who was also fishing nymph, seemed to be doing better than I had been Had a long chat about where to fish in the area.

Walked down stream for a look did not fancy it and I was getting cold so walked back and went home.
Had a look at the river levels on line, the rain has brought the Irwell up a bit, more rain tonight and tomorrow should do more. Sorry that's rubbish, little rain tonight and none tomorrow.
That's it for this week.


Posted by Flyfishing the Irwell and other streams at Wednesday, June 19, 2013