Had a hour on Eagley Brook in the Valley, been a while since I last fished there. Fished 3 spiders up stream and down stream and caught a couple of small ones. 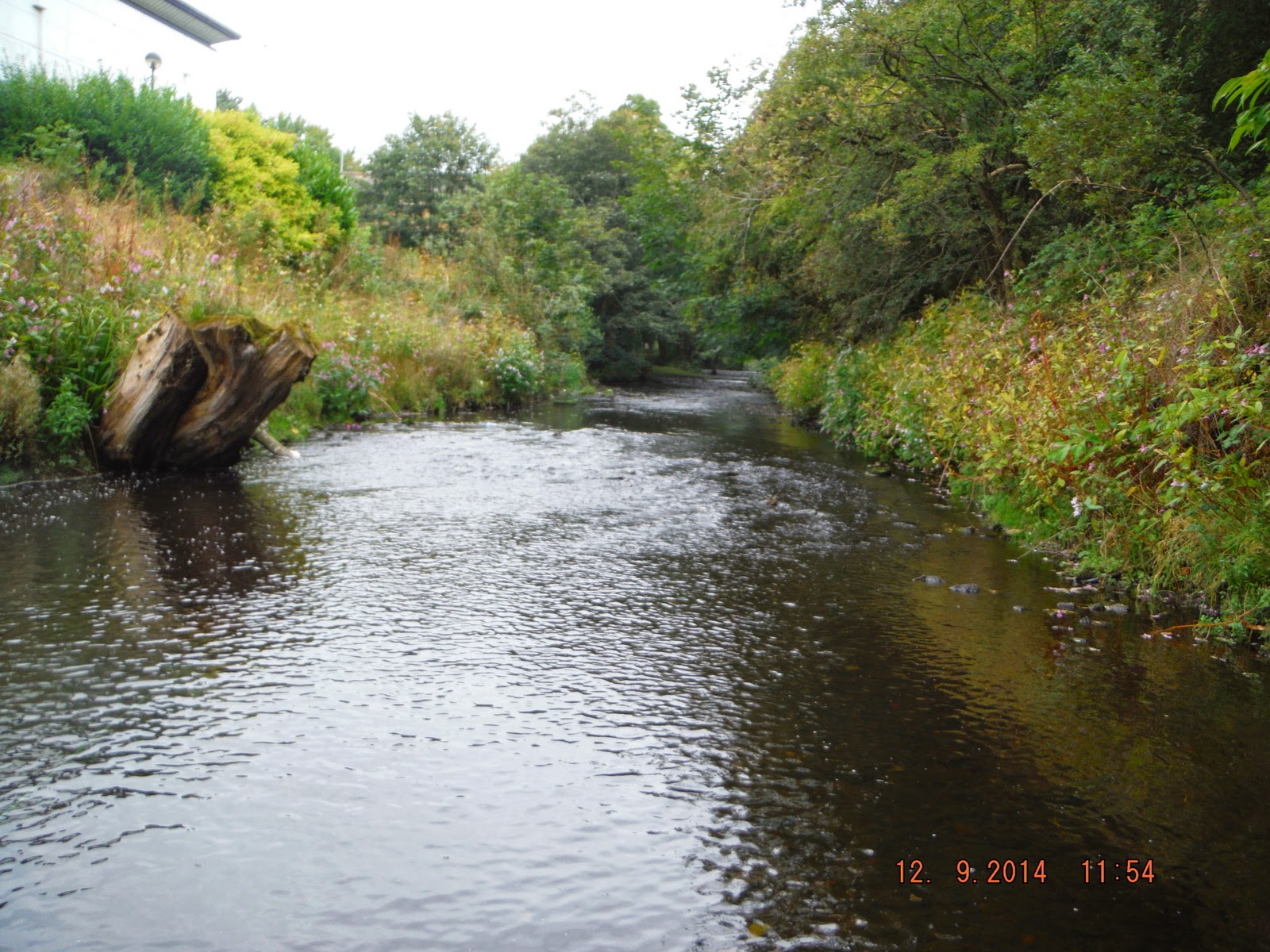 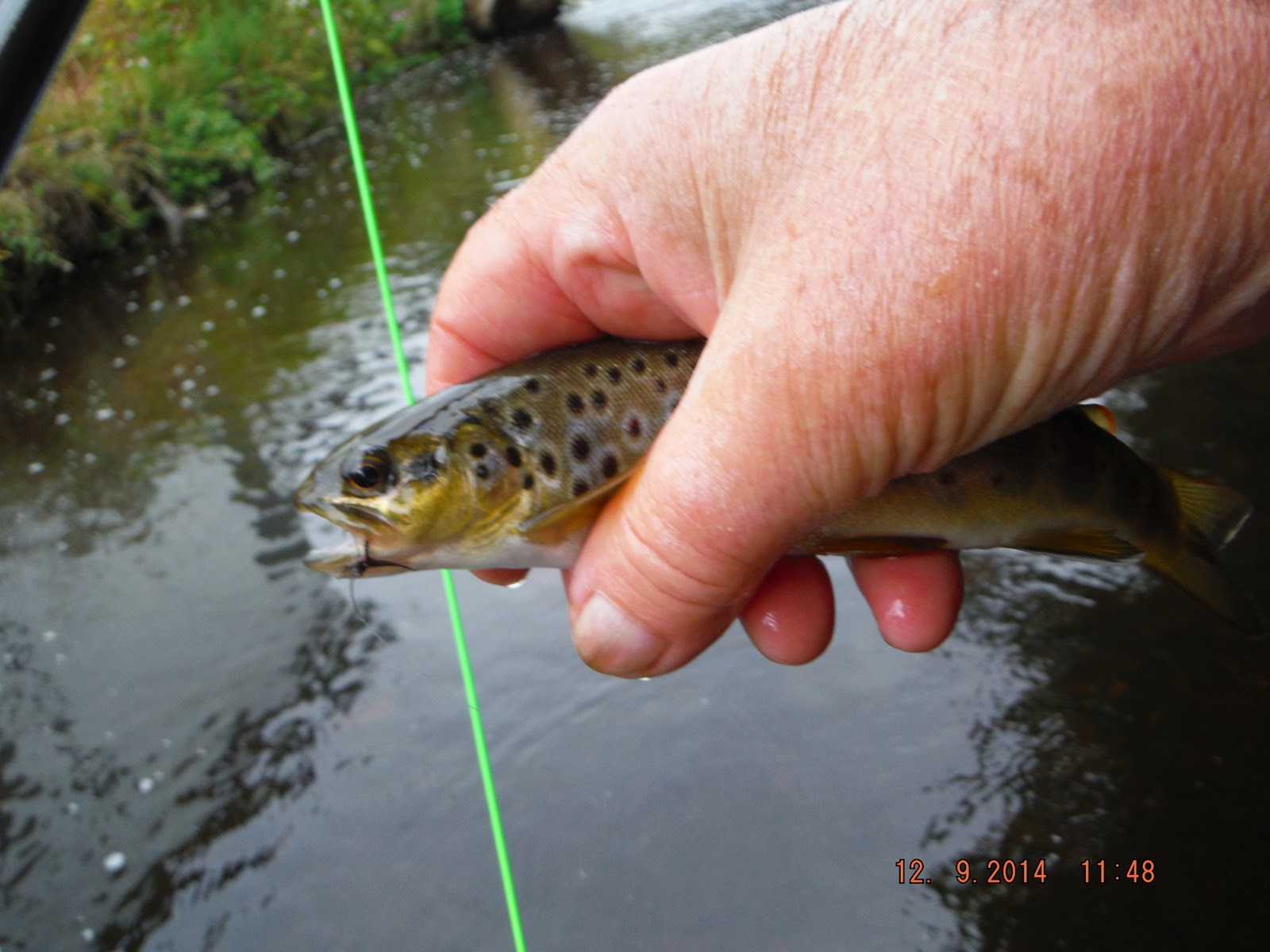 This one came from the pool above, just by the tree stump. 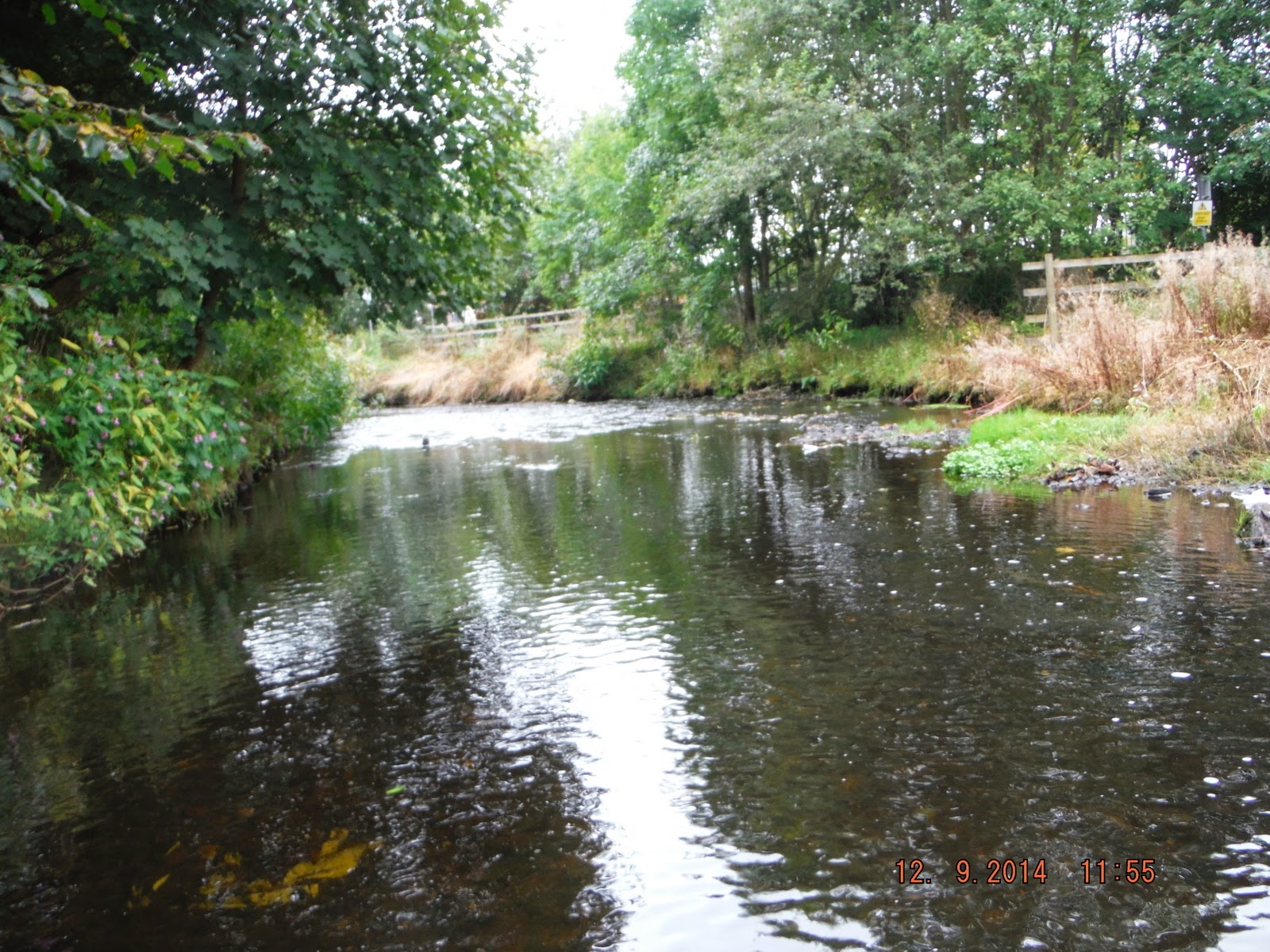 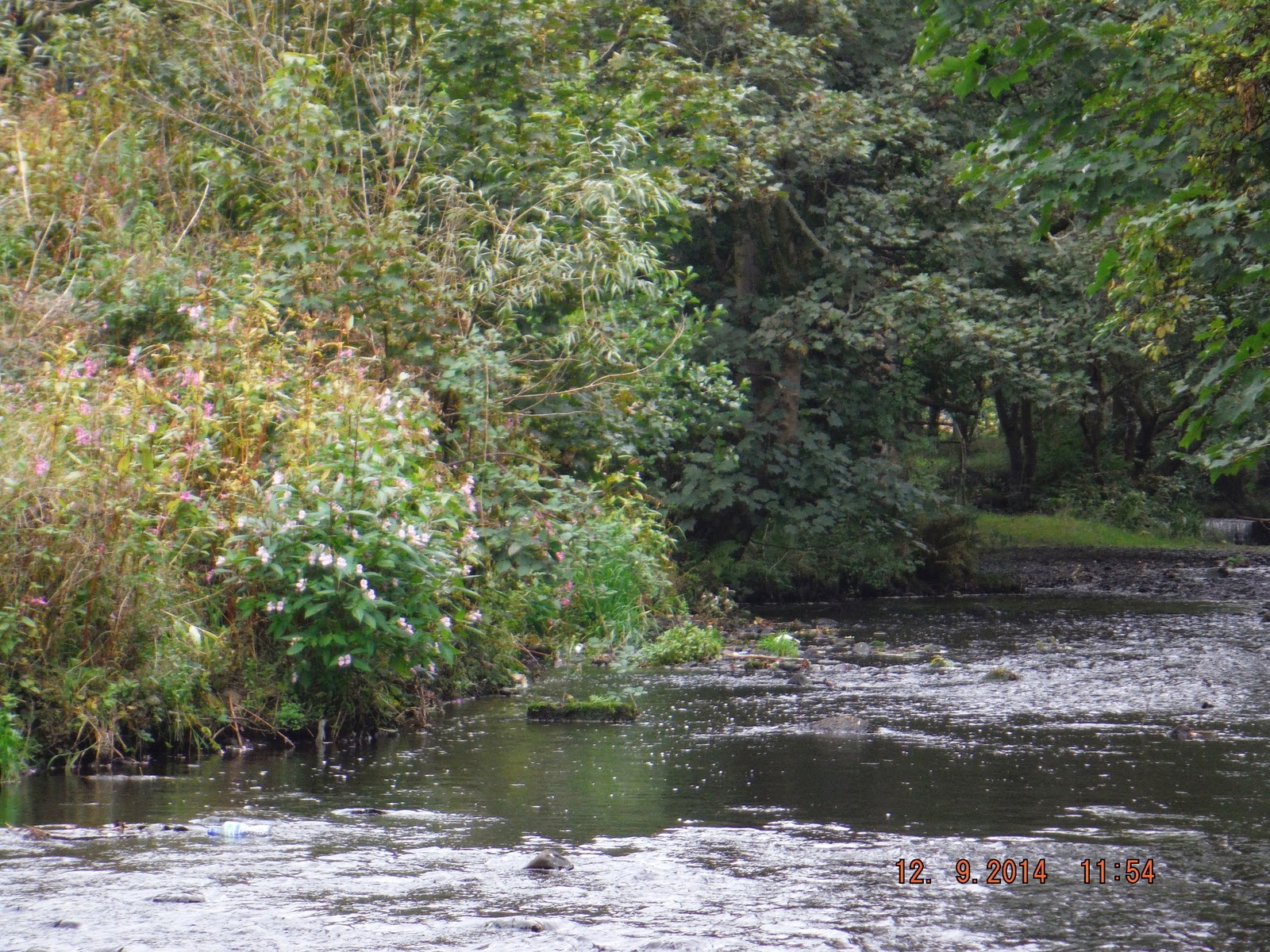 Fishing the pool under the road bridge when I put all 3 spiders in a tree higher than I could retrieve
them from, they are still there. I will go back and retrieve them, can't leave line and hooks where birds could get caught up.
It was time for what I was in the valley for anyway which was to see the film "A Most Wanted Man" very good.


Saturdays Bury Ground parking is a no problem and I was due a day there. Two men fishing maggots by the car park, had a quick word, they were only catching minnows.
Went up to the main weir and waded in, started with a pink gold head nymph, nothing doing in the weir pool. Caught one small one and lost another in a riffle just down from the weir pool. Moved down to the main  riffle hooked and lost two before I netted a small one.

As I got to the top end of the long glide I hook a good fish which left me after the fourth jump, I was not pleased.

As a booby prize I netted this one, better than nothing. 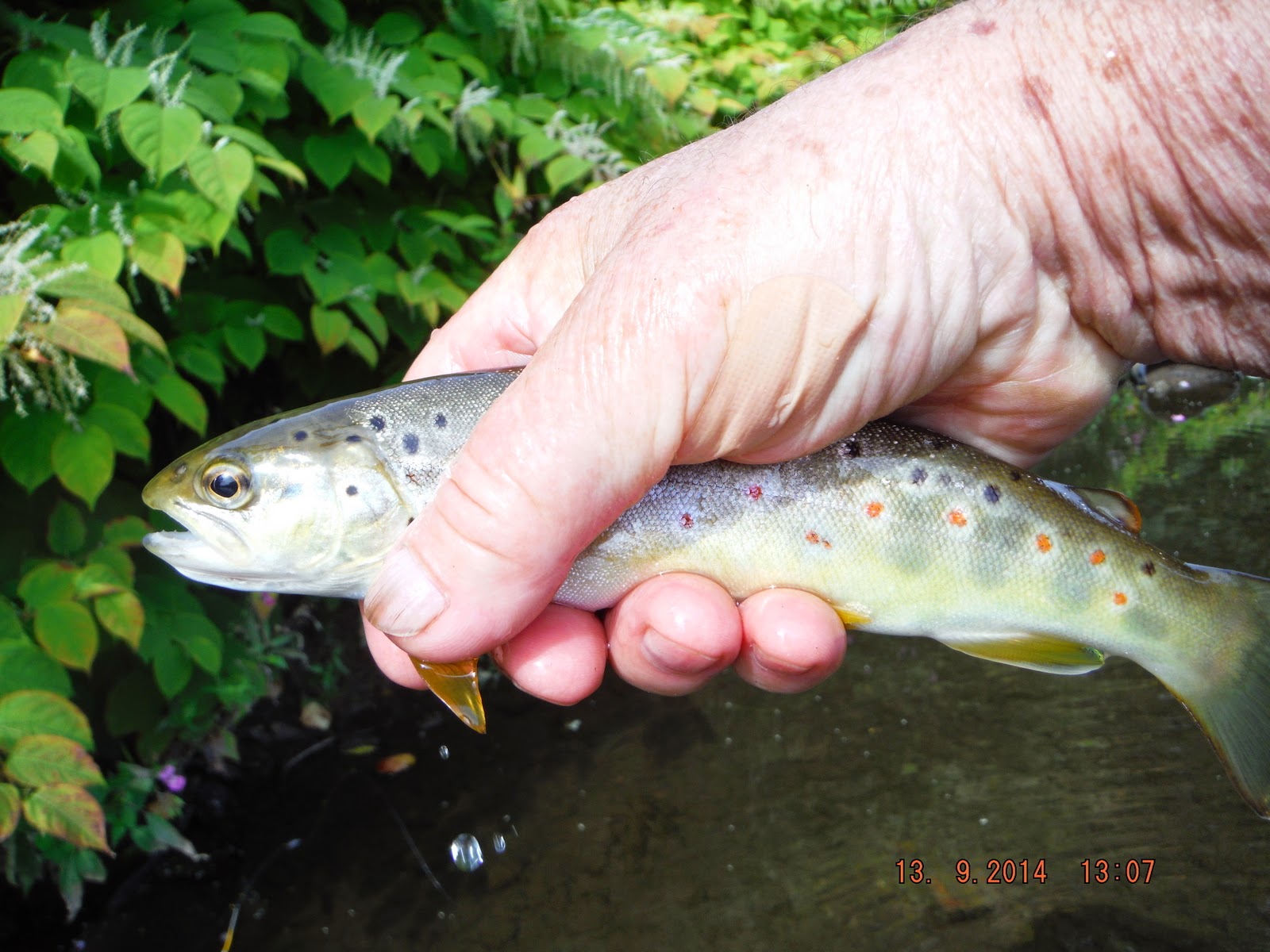 The Long Glide  looking down stream. 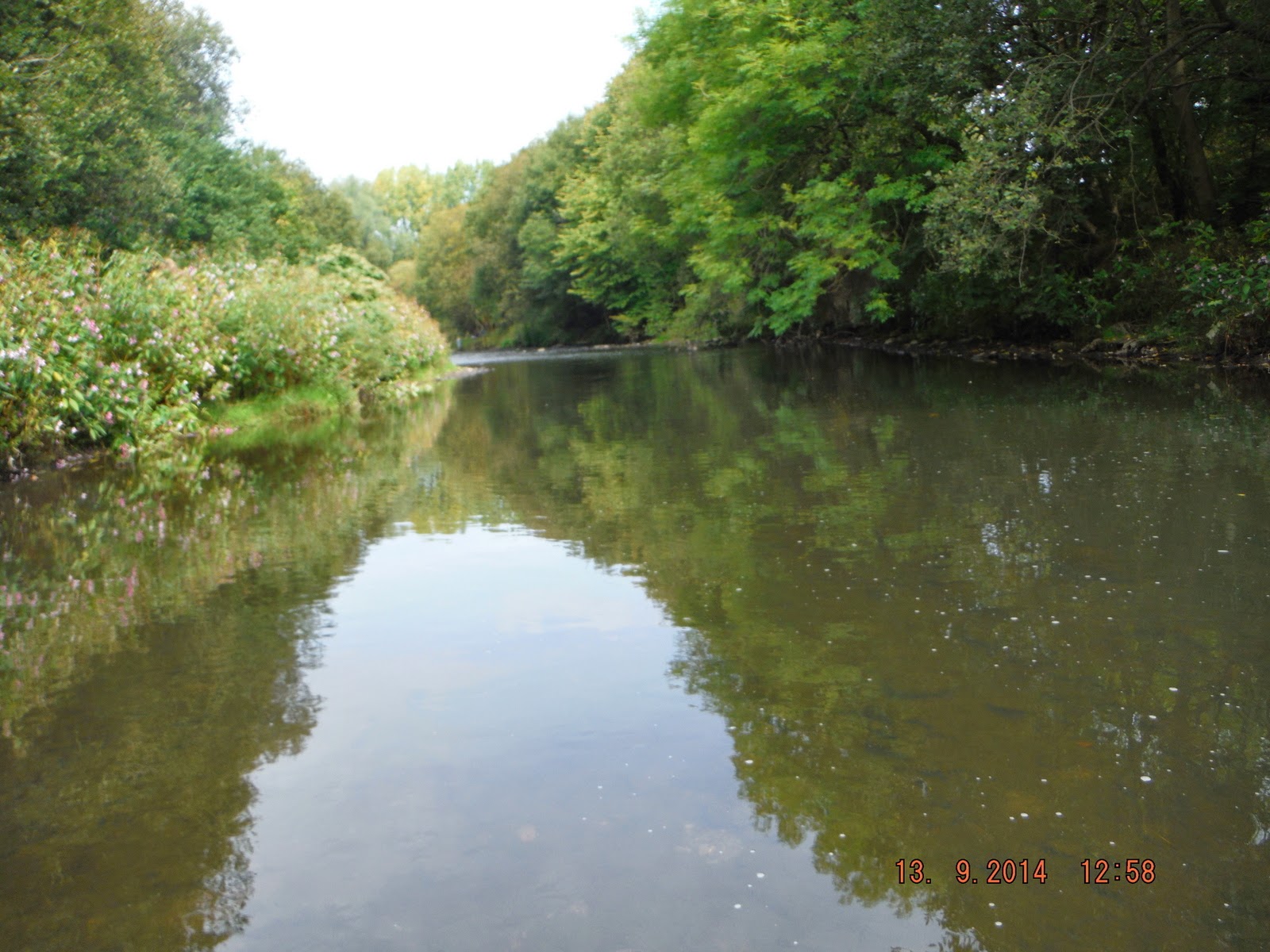 Decided to go up river to the top weir so waded up to the middle weir where there was another chap fly fishing below the weir pool. His wife and two children where on the bank watching.
Told him how I had done and where I was going, not sure he understood, think they where foreigners.

The top weir is part broken, needs to be taken out altogether. Above it is a super market trolley grave yard, some below it as well. they come of the old railway bridge that is now a foot path over the river.

That's just about all of the river coming through the gap in the weir doesn't look like a lot of water but that's  all there is. 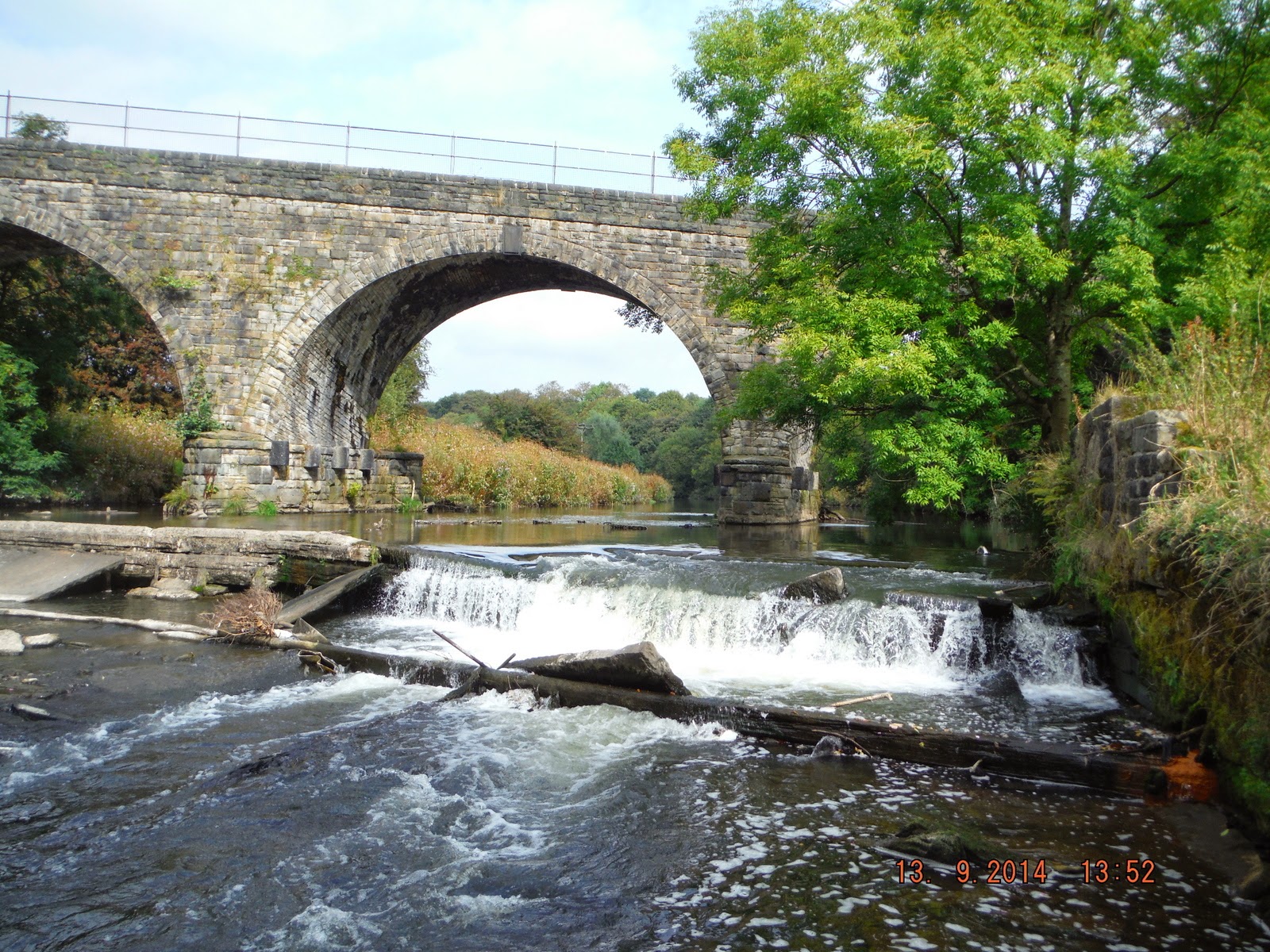 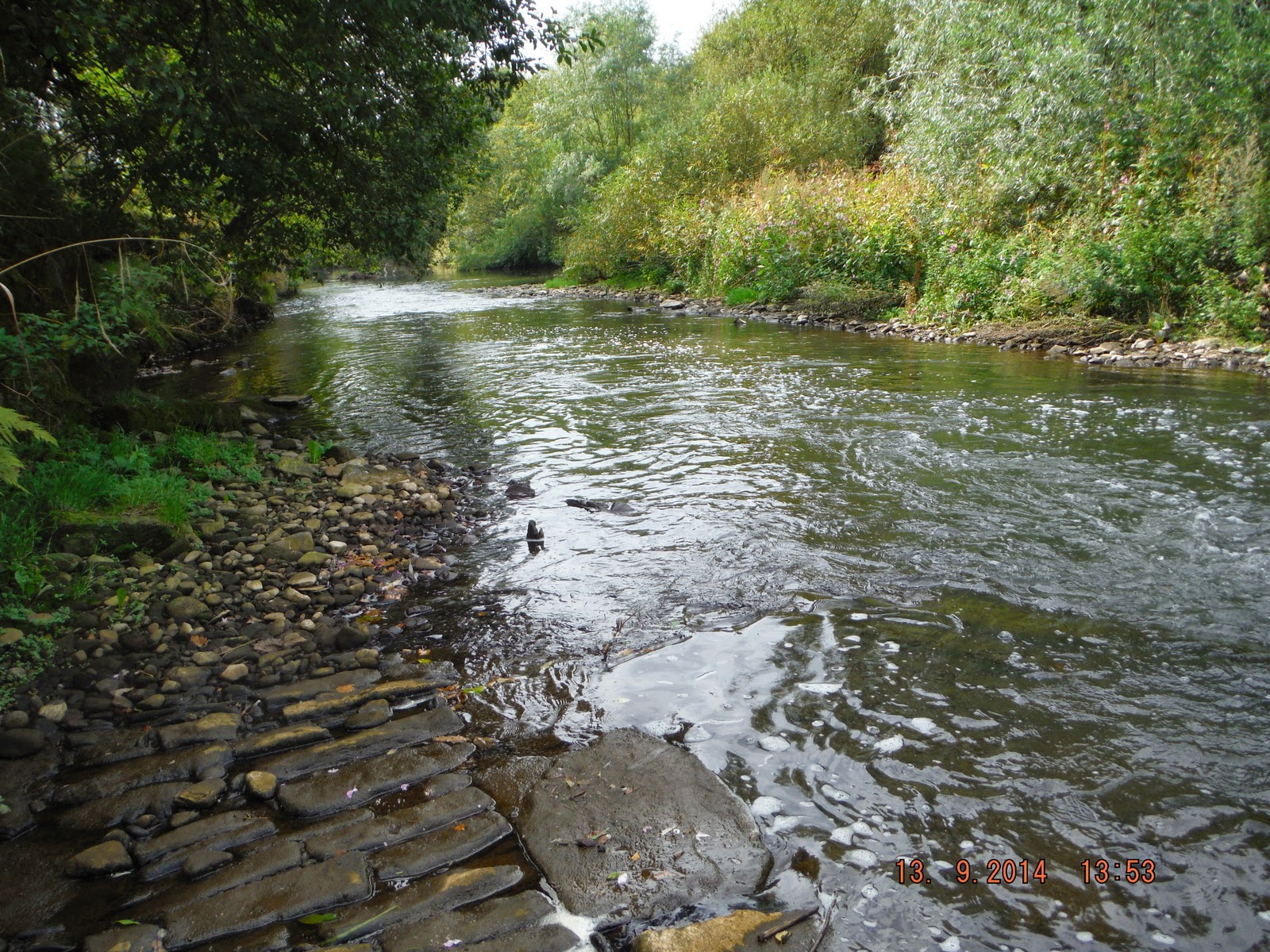 Looking down from the weir.
I fished this bit and caught the smallest trout in the river don't know how it got the nymph into it's mouth.

Then I waded across and climb over the weir into the top pool, not very deep but plenty mud, trolleys a wheelchair and lots of other rubbish. 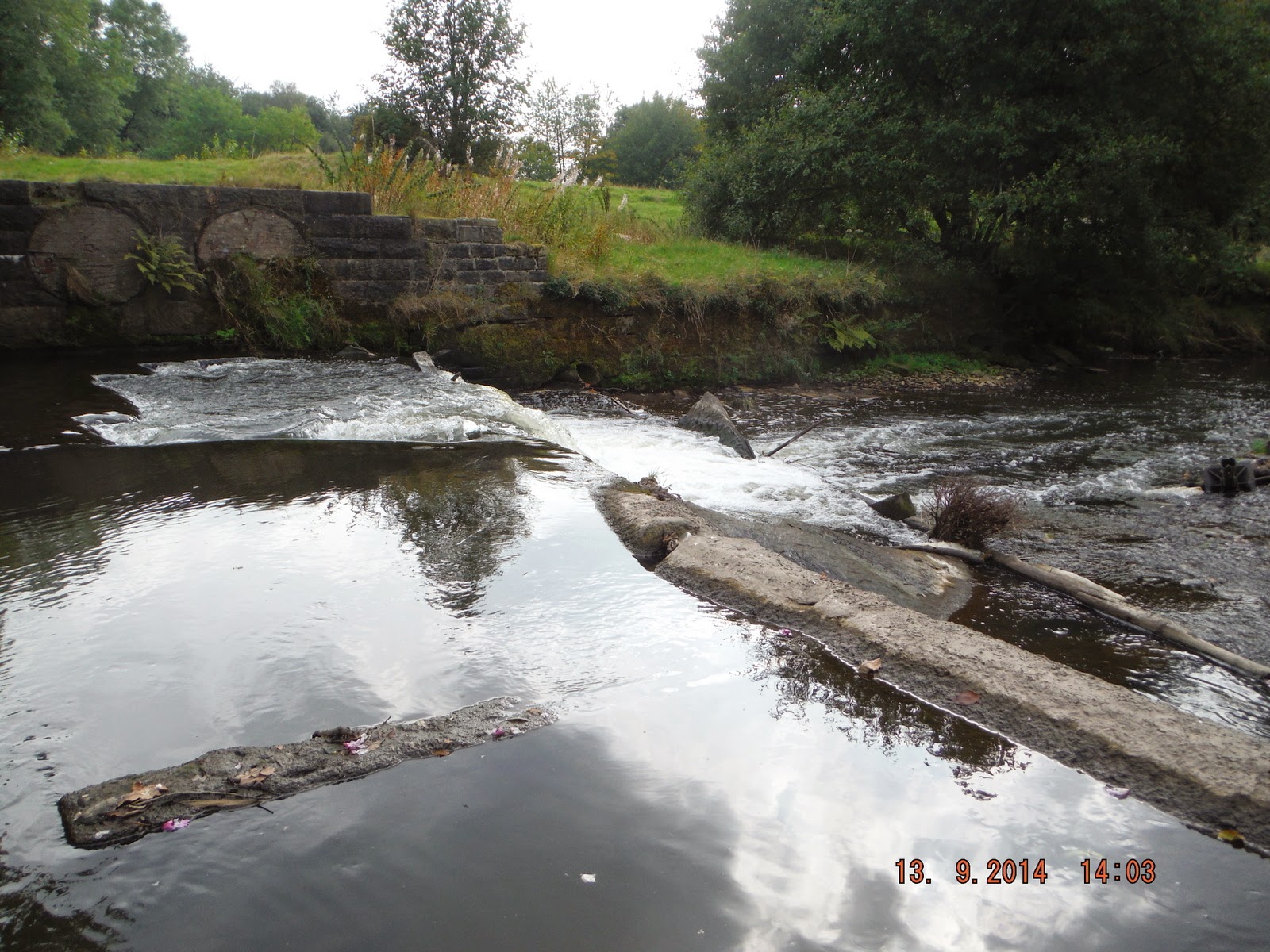 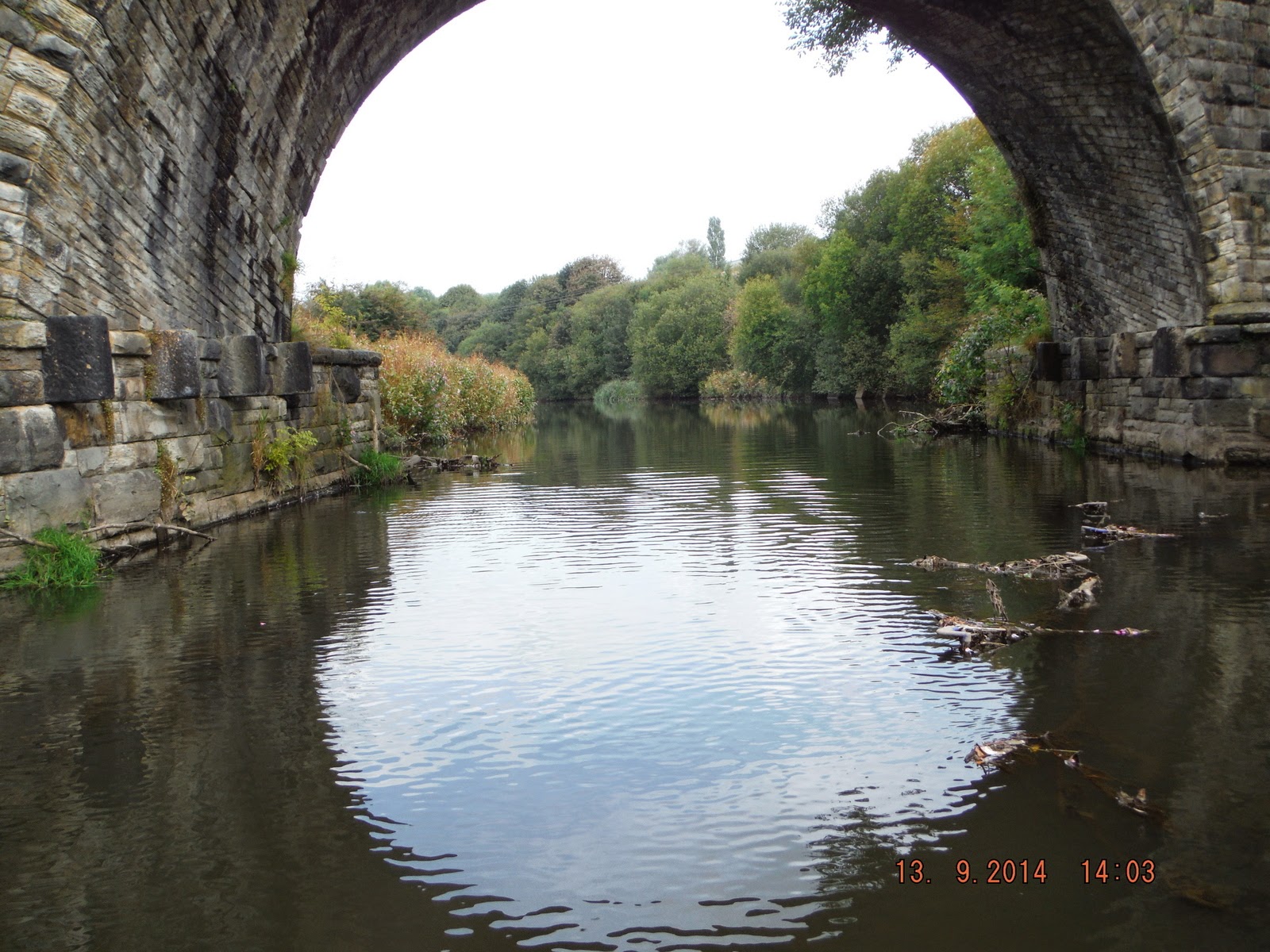 They knew to build bridges in the old days, not much chances of this one falling down. 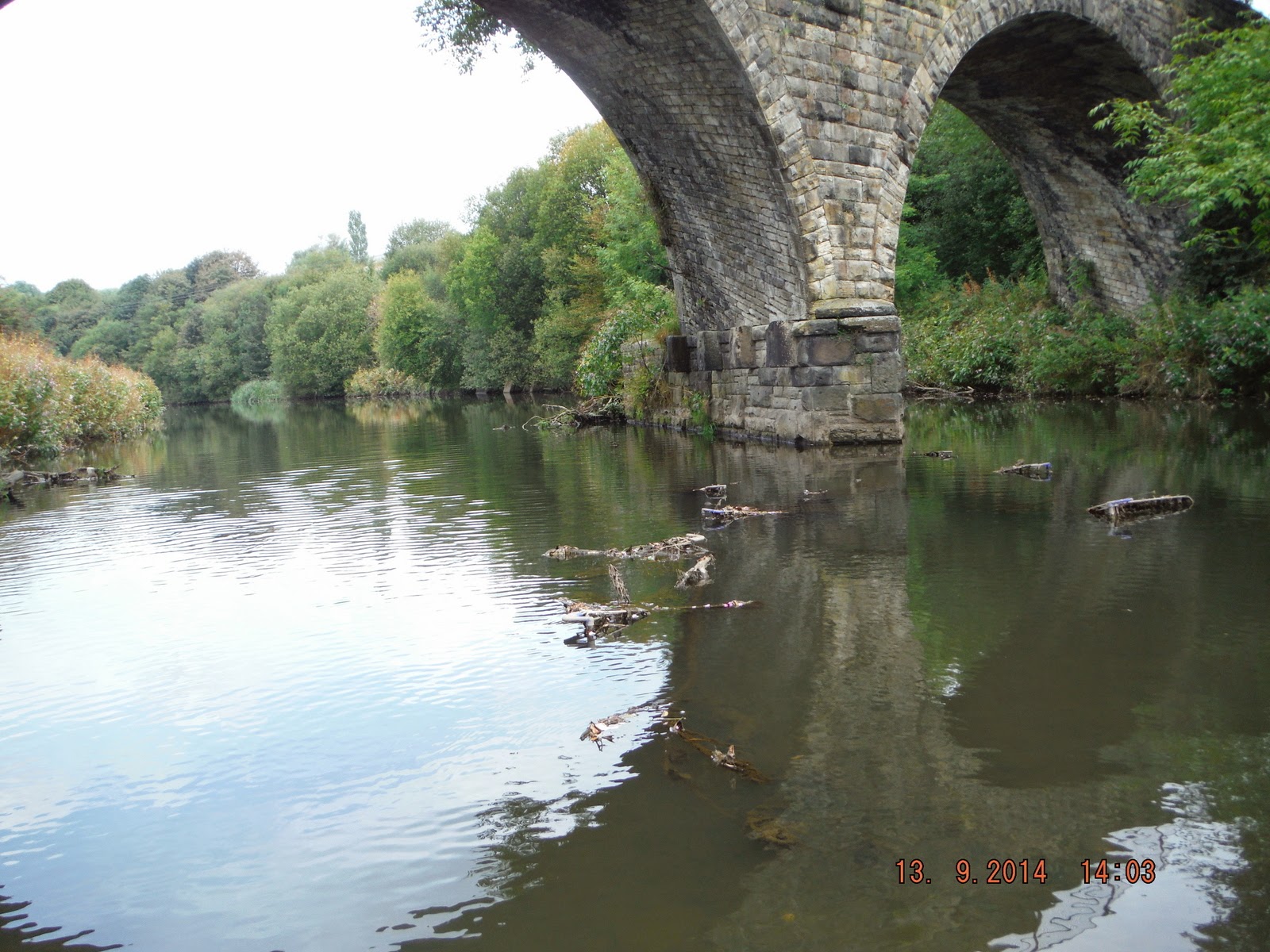 
Moved down below the weir and changed to a Olive, fish were rising down by the sunken tree. 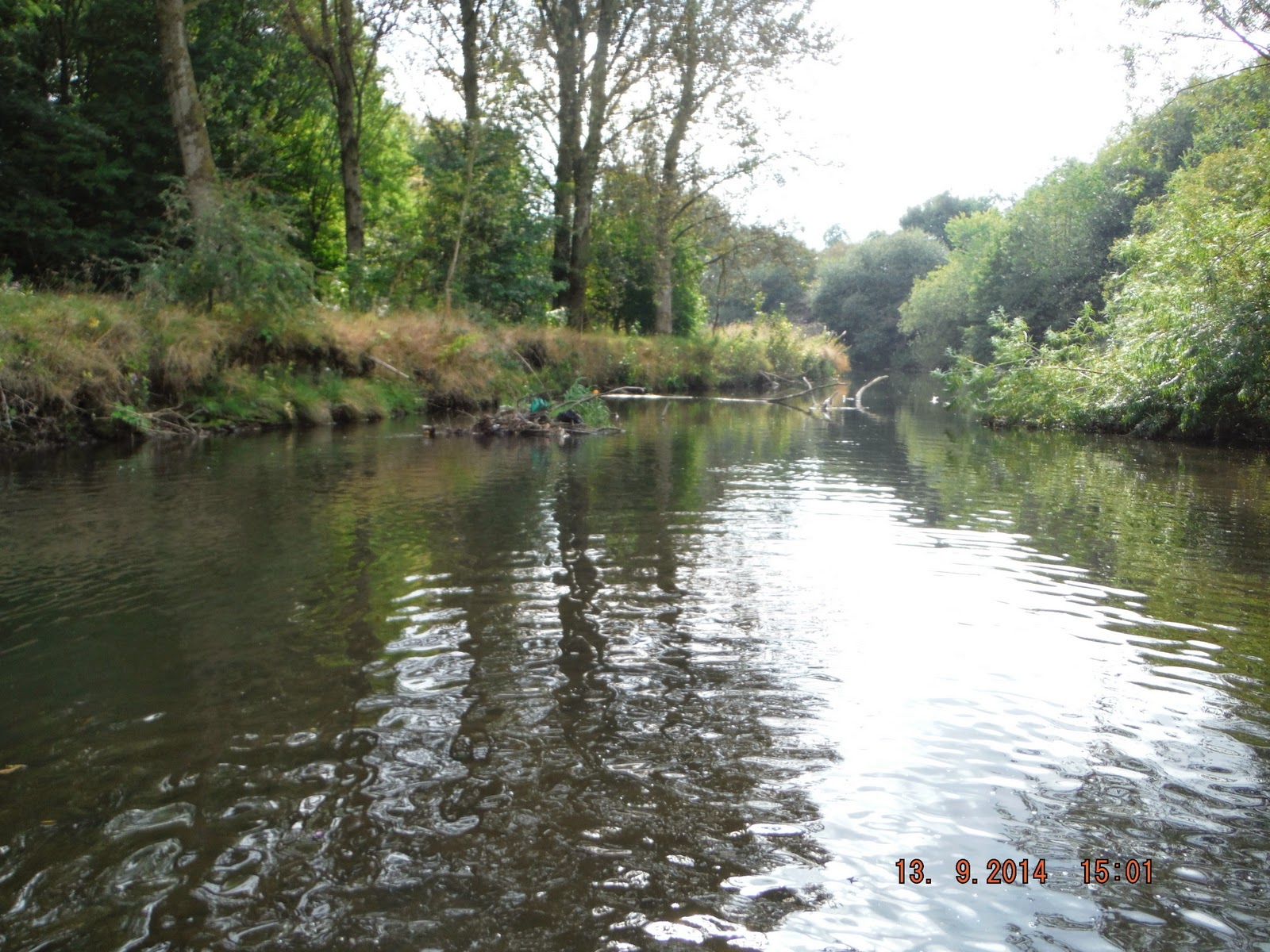 After two or three came up for a look without my being able to hook one, I landed this. 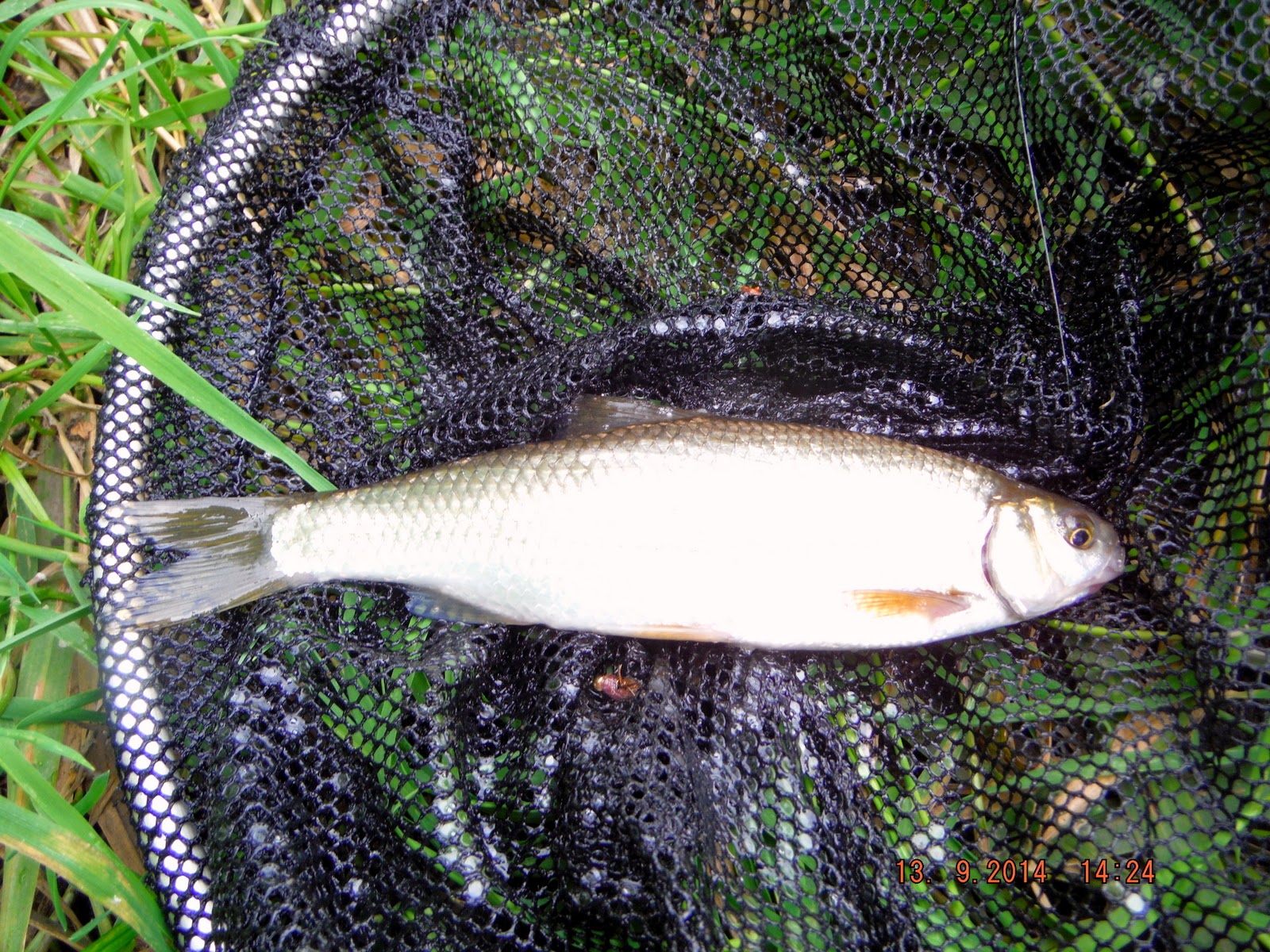 Small Chub, I think, the next was definitely a Chub. 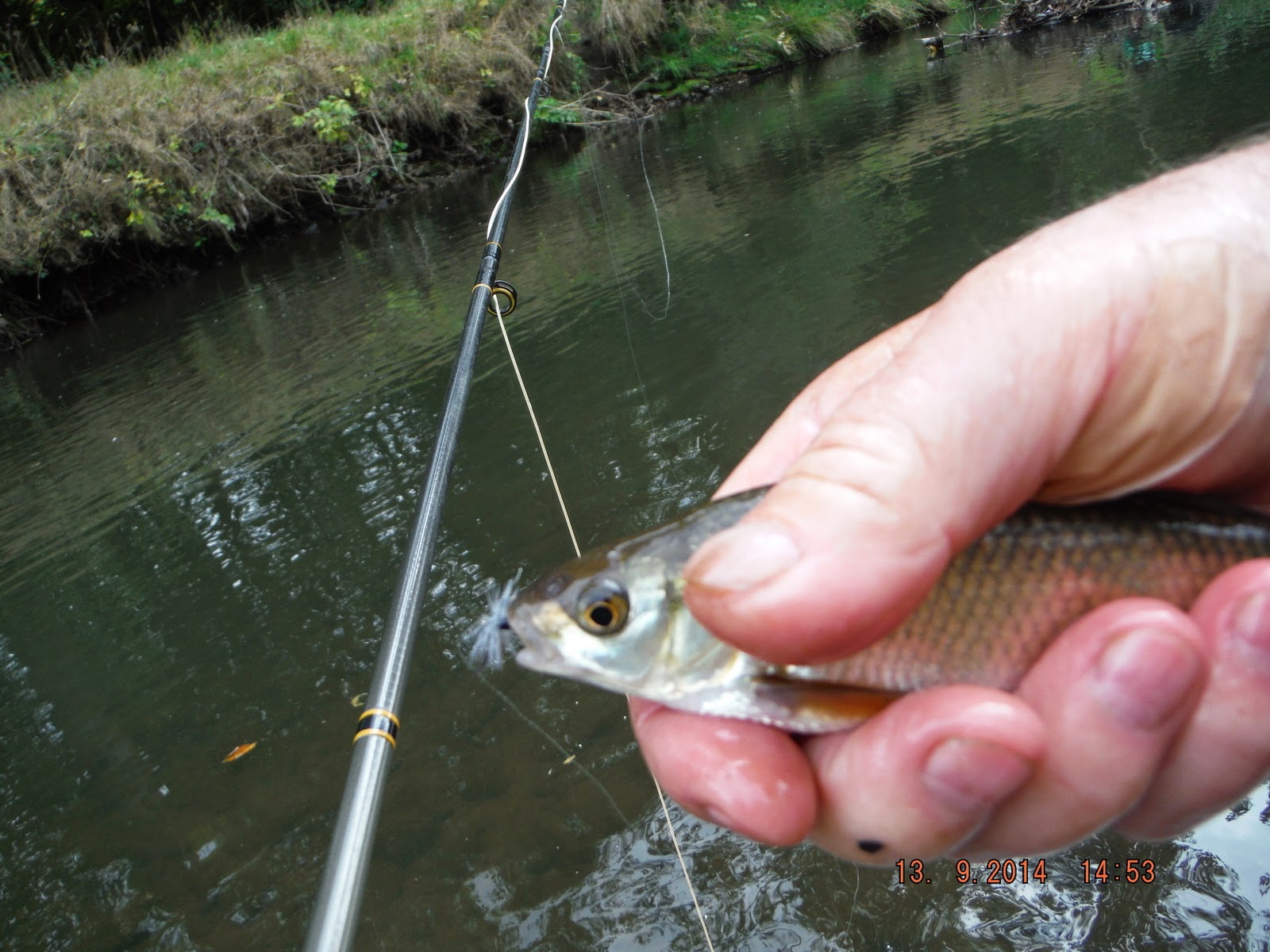 With the Olive still in places. They don't fight like trout but at least I was catching.

Caught a couple more before it went quiet then back up river wadded across and back down to the car. 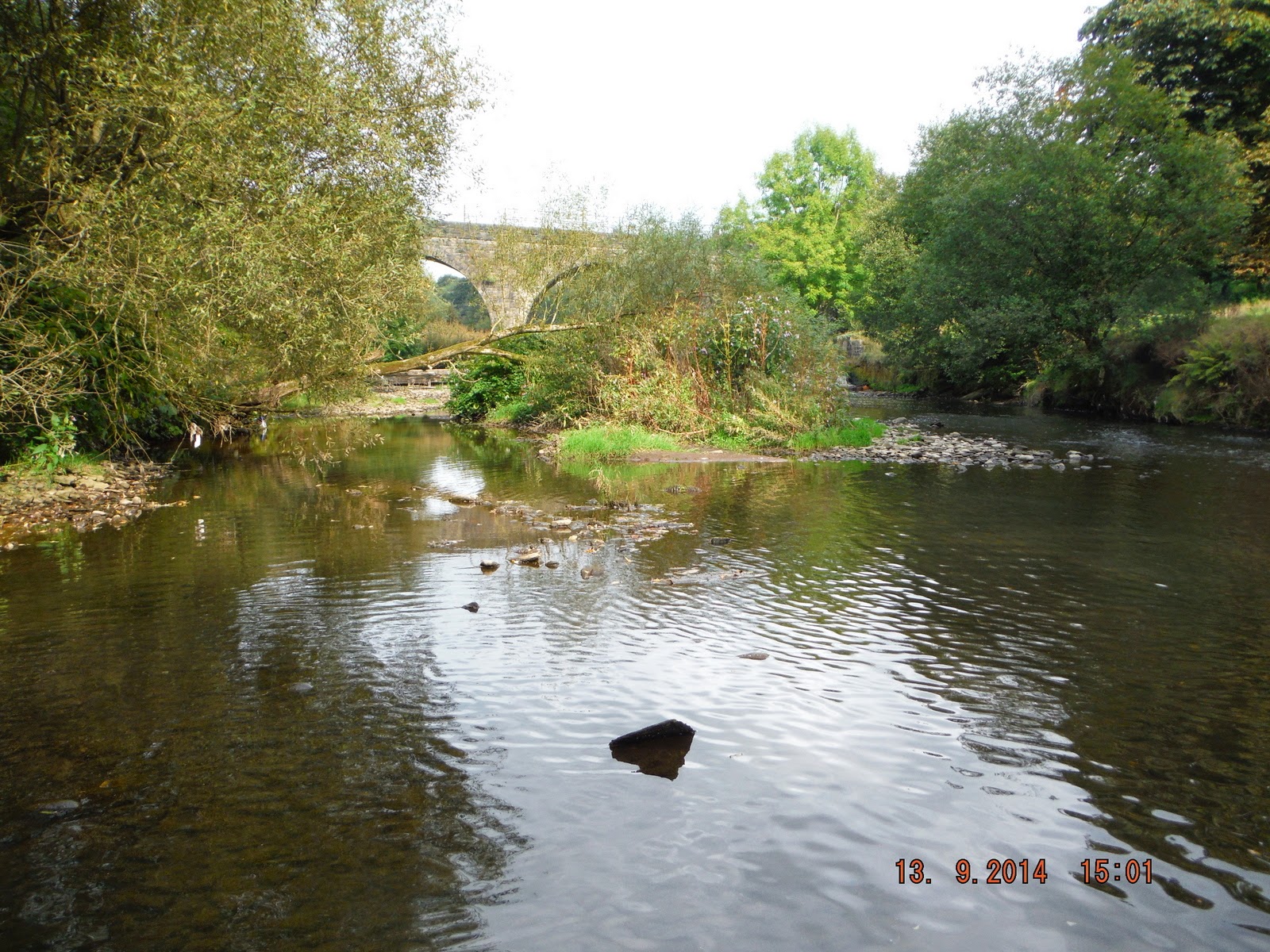 The family had gone from the middle weir but there was a a man of my age by the river near the car park. We talked about how the river had been cleaned up and from when we were young and how the wild life had improved, to prove it two Kingfishers flew up and then down the river as we talked.

I mentioned that I was born not far away and mentioned the street, he looked at me and said what is your name. I told him and he told me his, we had not met for more than 50 years when we were best pals at school and when we started work. The last time we had seen each other was just before I joined the army in 1961.

I told him that I had mentioned him only last week when I was with my sister talking about our younger days, what were the chances of us meeting again so soon after I had been talking about him.

Posted by Flyfishing the Irwell and other streams at Saturday, September 13, 2014