Went back to the river Roach, spelt Roch on ordnance survey, don't know how they came to calling it that has always been the Roach since I was a child and every one that I ask always say Roach.

Anyway call it what you will, fished it further up stream from Fridays stretch. Only caught two fish, but the best one was some fish and also the biggest brown trout that I have ever caught. 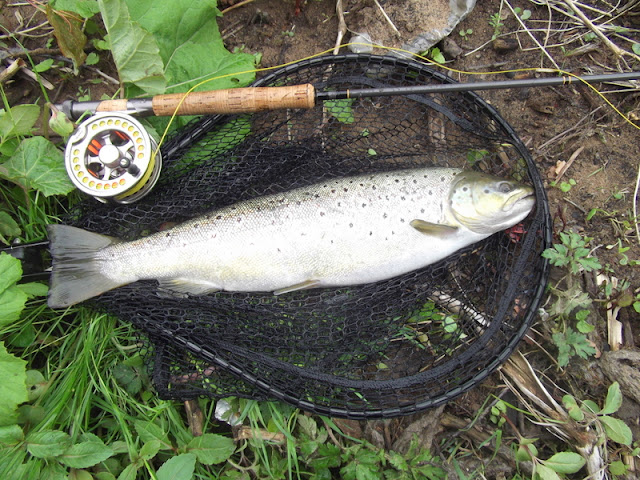 Twenty one inches of, I am not coming to the net no matter what you do, I don't know how long it took to get him near the net, but it was not quick.
As soon as he saw me and the net off he went to the other side of the river, got him back and into the net but as I started to lift him he jumped out of the net and went twenty yards down stream.

You would think after that he would have needed time to recover, but he was away as soon as I put him back in the water.

Like the Irwell trout the roach fish are very light in colour and most do not have a lot of spots, still beautiful fish though.
Nearly forgot, caught him on dry fly Greenwells Glory.

Today (Monday) had one hour and a half on the Irwell at Brookbottoms. Two fish, one was a good thirteen inch fish, on a goldhead pheasant tail nymph.

Then went back to the car to change reels as the line was not working my eight foot glass Pateke Morton 6 weight. Put on a Youngs Beaudex with sinking line and a pheasant tail nymph with out a goldhead and caught two more further down stream.

Well that's it for today, see what the weather does tomorrow before I decide were to fish, by the way the Irwell was running clear as we had next to no rain over the weekend.

Posted by Flyfishing the Irwell and other streams at Monday, May 20, 2013