The brook again but not the same places as on Friday, I started a lot further down stream this time. I forced my way into a place that I have not fished for a long time. I say forced because that's what I had to do, the Japanese Knot Weed and the Balsam are only part of the problem. Stinging Nettles and Brambles along with Willow and Sycamore saplings all had to be pushed through before I could get down the brook some 100 yards before starting back up. 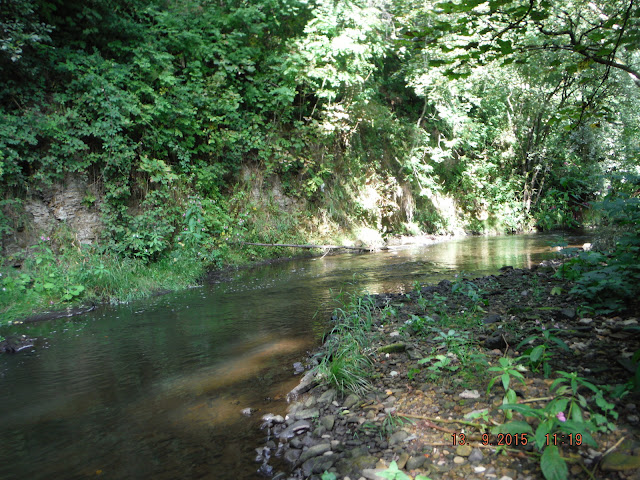 It looked like I should be into some fish and the first one came from this stretch. 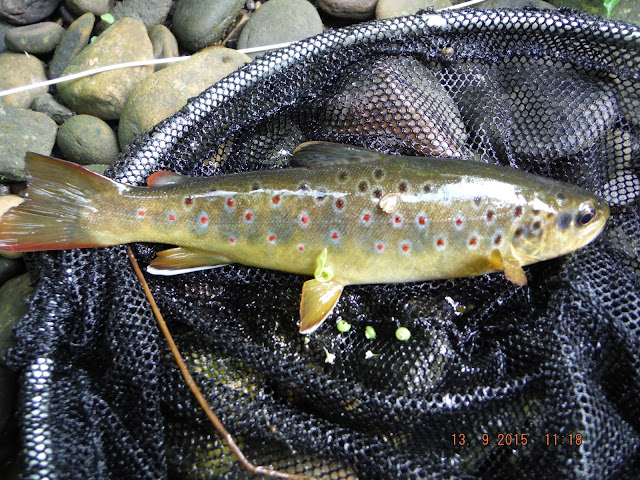 Nice fish to start caught on a Adams, in fact the same fly that I used on Friday. Thought I was in for a good day, but it turned out that it was the only fish for some time.

Carried on up stream until I got to what is usually good beat for fish but still nothing, changing to a Olive and then to a Greenwell's on the way.
The next bit of the brook I have never fished before as I have always treated it as private land, there was usually signs of work being carried out there and some kind of workshop back from the brook. It had become very overgrown since the last time I was there, the Japanese Knot Weed had taken over most of the banks of the brook along with lots of Himalayan Balsam. I decided to give it a go, glad I did. 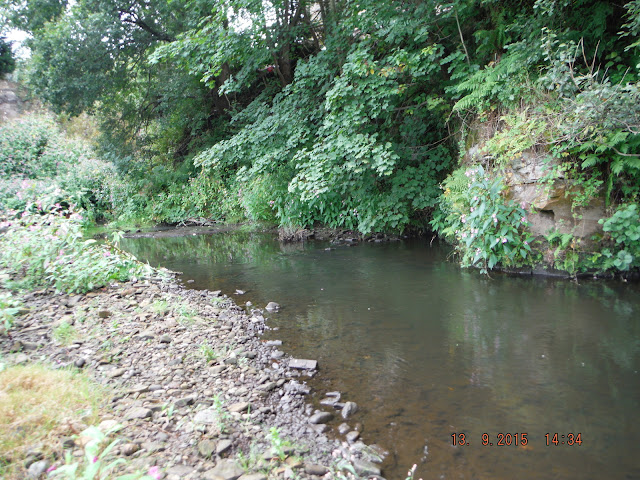 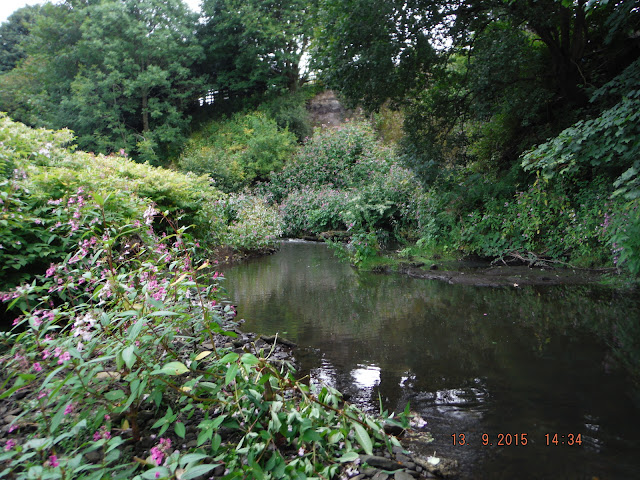 The first bit look ok and was quite deep, but to my surprise it produced nothing.  Round the corner I came to a weir. 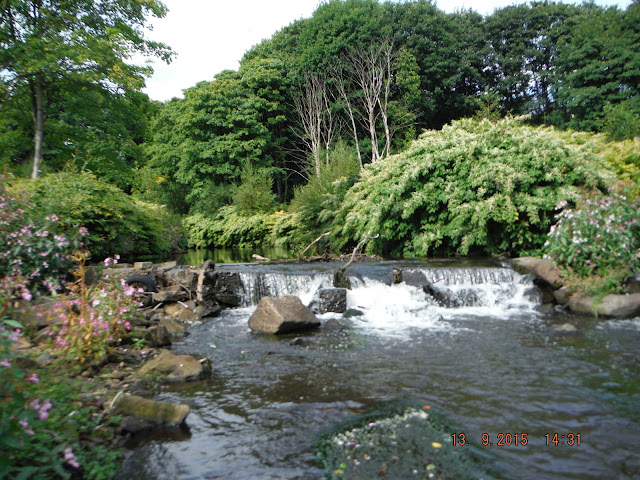 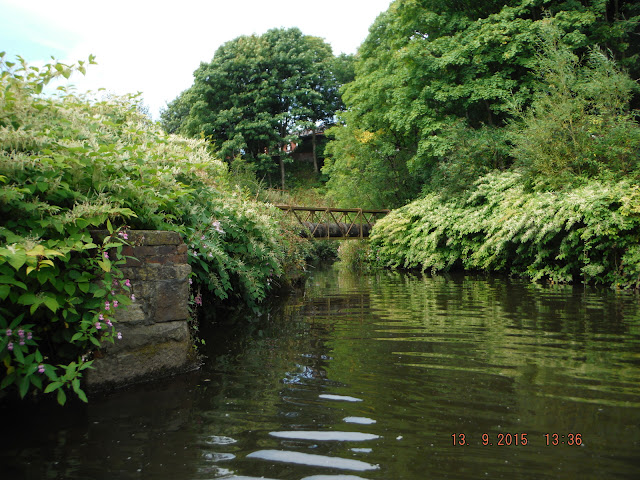 Above the weir is not my favourite type of water, sluggish with a muddy bottom. Anyway I waded in and as I did a fish topped, I cast to it and caught the one below. 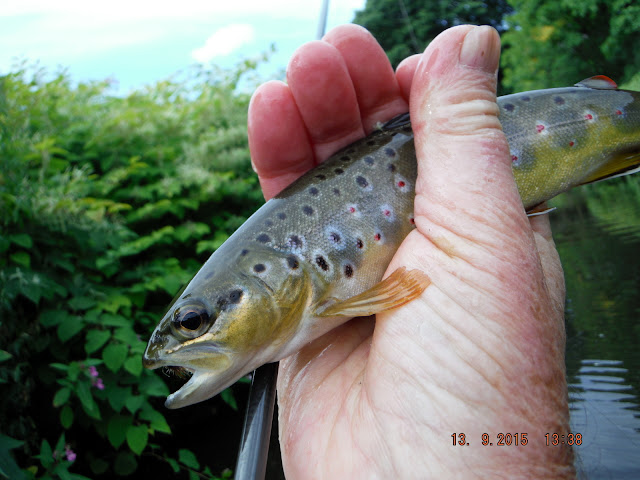 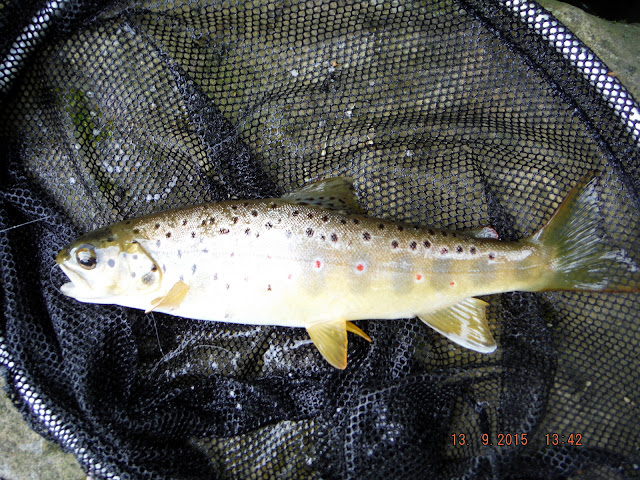 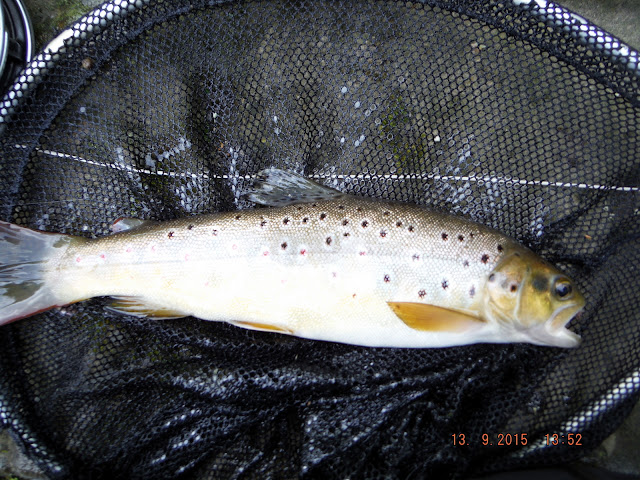 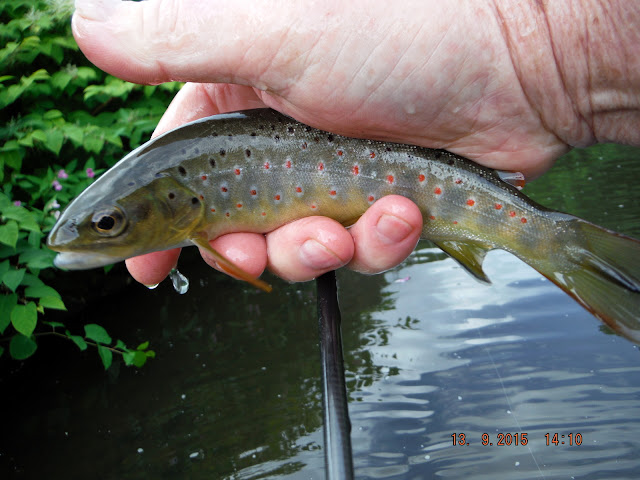 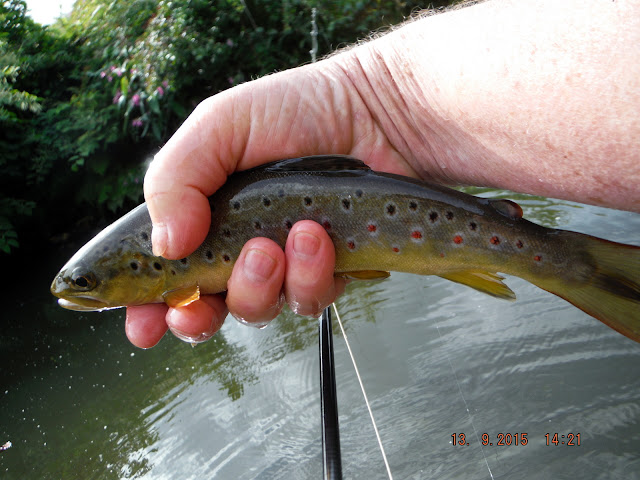 I will be back there again mind you it might have to be next year, Only just over two weeks of the season to go.

Went back to the car and drove up to another part of the brook and started again. 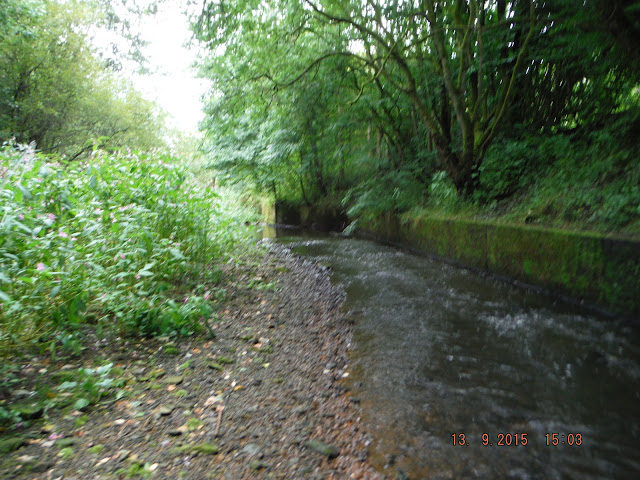 Not the prettiest part of the brook but there be fish there, well a bit further up actually. 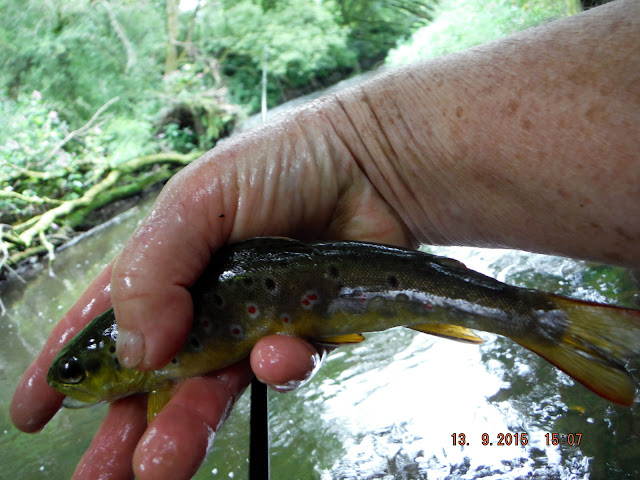 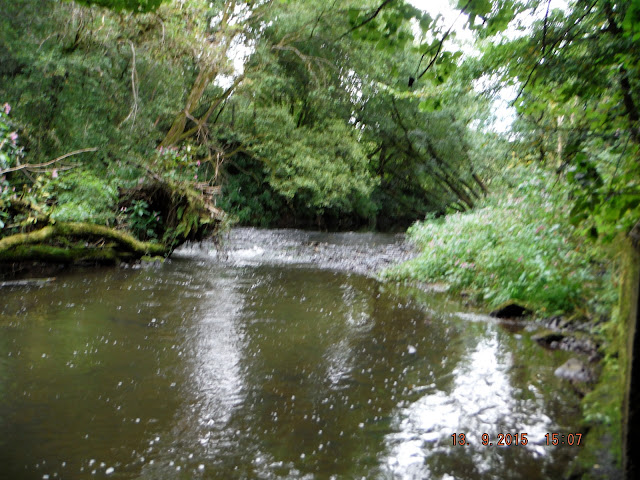 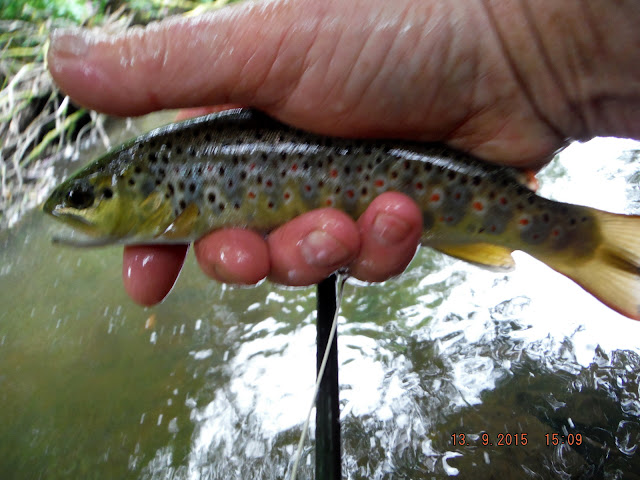 Not that big but a few of them. 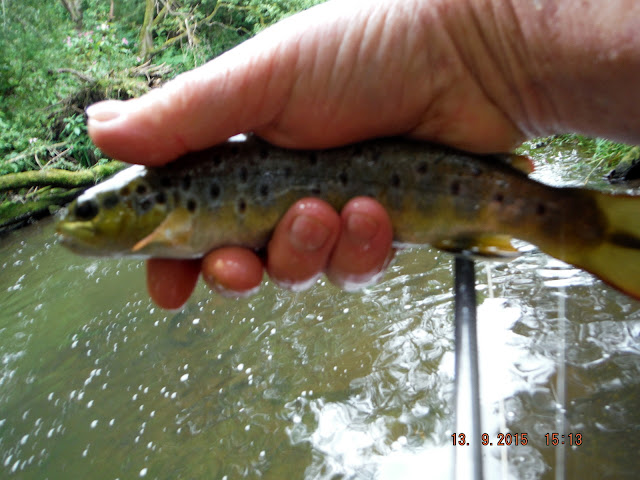 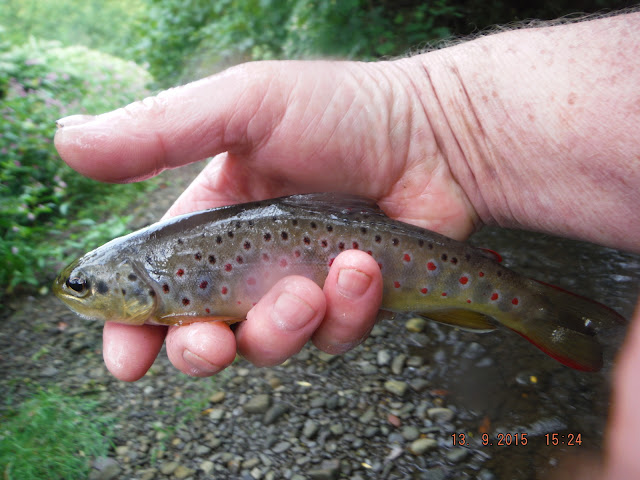 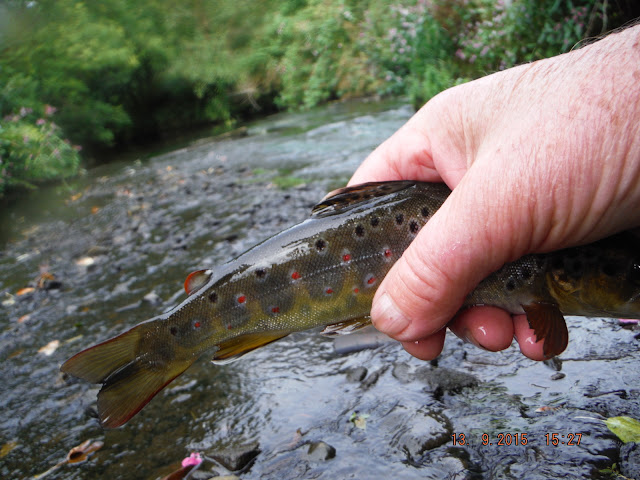 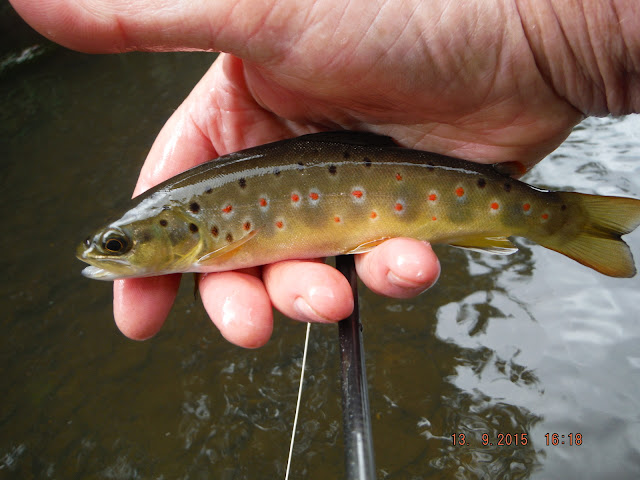 and a little one to finish.

Met and had a chat with Wes who was fishing a bit further up stream hope you had a few mate.

Well after a slow start I ended up well pleased with the day.

Posted by Flyfishing the Irwell and other streams at Sunday, September 13, 2015