Tuesday 13 Aug:   Had my stitches out this afternoon and went to the lower Bradshaw Fly Fishers beat.
Fished  with a 7 foot split cane and dry fly, caught 2 small trout, but as I hold the rod in my left hand where the stitches had been, it was hard work. So I did not fish for long, I will have another go tomorrow, not decided where yet.

Thursday:   Didn't fish Wednesday as my hand was sore from Tuesdays fishing.

Went to Bradshaw Brook at 7 Acres, fished mainly up stream of the road bridge. The best fish was an 11 inches. 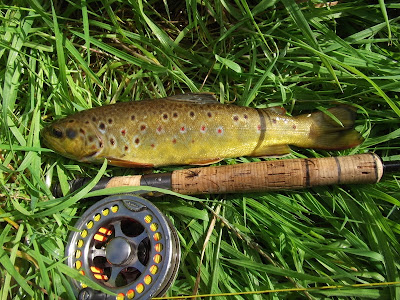 Had a few around the 9 inches and one or two smaller ones. The best fish, maybe, I lost trying to stop it going under a bush in the river, I will get it on another day. Caught all the fish on a Adams Dry  with a carbon 8 foot rod. Tripped over my wading stick and got rather wet luckily not to much got in my waders so I carried on fishing.

Friday:   Lots of rain over night, Irwell up and muddy so I didn't fish will look how it is tomorrow.
Just seen the weather for Saturday, lots of rain so I might watch the football.

Sunday:   Fished Eagley Brook in the Valley in the morning, 4 small browns on Goldhead Pheasant Tail Nymph. Brook quite high but not to muddy. Then went to Bradshaw Brook at 7 Acres, two other anglers in the car park as I arrived. Had a chat, they had just come down from Mitten on the Ribble, they said it was in flood and they had not bothered to fish. As they had arrived first I said pick where you want, they said down stream so I went up. 4 small browns again though this time on a B-WO dry.

Posted by Flyfishing the Irwell and other streams at Tuesday, August 13, 2013